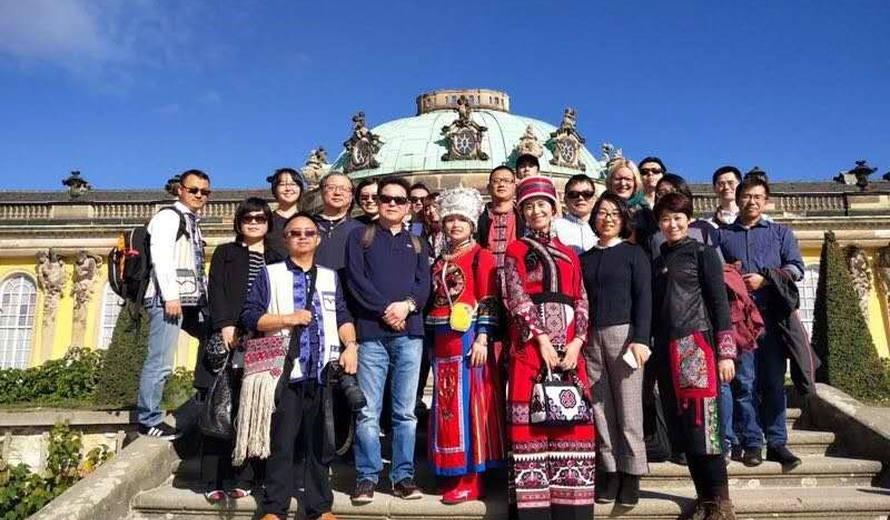 The Chinese Delegation at the Palaces and Parks of Potsdam and Berlin World Heritage property. © UNESCO / UNESCO

The first China/Germany Cultural Exchange on Heritage Conservation for Sustainable Development, organized at the initiative of UNESCO, took place on 26-30 September 2018 in Berlin, Germany, and gathered international experts and stakeholders for an international reflection session on the role of culture as a vector of sustainable development on the international stage, today and in the future.

Organized by the UNESCO Beijing Cluster Office and hosted by the Institute for Heritage Management, with the support of the German National Commission for UNESCO, the Chinese National Commission for UNESCO, the UNESCO World Heritage Centre, the German Ministry of Culture, and the German National Committee for Monument Protection, this meeting aimed to facilitate effective exchanges between policy makers, experts and practitioners from China, Germany and beyond, and to help them engage in sharing good practices in the field of heritage protection for sustainable development.

“Culture plays a crucial role in sustainable development. Yet integrating various aspects of culture is not an easy task. It calls for strong multi-stakeholder partnership across fields of expertise and across national boundaries,” emphasized Dr Feng Jing, Chief of the Asia-Pacific Unit of the UNESCO World Heritage Centre.

The concepts of World Heritage, Intangible Cultural Heritage and Diversity of Cultural Expressions, which were created  by UNESCO, have made an enormous contribution in raising public awareness and promoting concrete actions in the field of culture. Their success is reflected in the 1,092 properties currently on the World Heritage List, the 470 elements listed on Lists of Intangible Cultural Heritage and the Register of Good Safeguarding Practices, and a thriving cultural sector, which accounts for 6.1% of the global economy, generates annual revenues of 2,250 billion USD and represents nearly 30 million jobs worldwide.

Since 2017, the UNESCO Beijing Cluster Office has been exploring the synergies between World Heritage conservation, ICH transmission, and the fostering of cultural creativity for the sustainable development of World Heritage sites, via multi-stakeholder partnerships. One of the successful examples of such partnerships is the UNESCO-China Youth Development Foundation Mercedes-Benz Star Fund project “Conservation and Management of World Heritage sites in China”. Highlighting the long-term and fruitful partnership between UNESCO and Mercedes-Benz, the Berlin meeting was organised as an outcome of this project and is expected to inspire more cooperation in the field of culture between Chinese and German government counterparts, universities and academics, as well as between individual World Heritage sites.

Dr Lutz Möller, Deputy Secretary-General of the German National Commission for UNESCO, also highlighted that “Germany and China have all-round cooperation. In the future, we can strengthen our cooperation on cultural exchanges in UNESCO’s fields of action.”

A Chinese delegation consisting of representatives from the Ministry of Culture and Tourism, the State Administration of Cultural Heritage (SACH), the Chinese National Commission for UNESCO, the Chinese Academy of Cultural Heritage participated in this exchange, along with heritage experts, site managers of World Heritage properties, and Intangible Cultural Heritage bearers. During the five-day event, exchanges were organised with the Berlin Monument Protection Office on World Heritage management practices, and participants engaged in discussions with representatives from the Federal Commission for Cultural and Media Affairs, as well as with the UNESCO Chair and students in the World Heritage Studies Programme at the Brandenburg University of Technology. The group also visited various UNESCO-designated sites, such as the Museum Island and the Palaces and Parks of Potsdam (both World Heritage properties), the Spreewald Man and Biosphere Reserve, and the Berlin “City of Design” UNESCO Creative Cities Network. This event provided an excellent platform for discussions between Chinese and German counterparts on heritage conservation, creativity and sustainable development. As part of the programme, a one-day workshop on “Heritage Conservation for Sustainable Development” was held and Mr Chen Ping, Counsellor for Culture of the Chinese Embassy in Germany, delivered the opening speech.

It is hoped that this UNESCO-led cultural exchange between China and Germany can inspire new reflections and partnerships on culture as an enabler of sustainable development. Together with other pilot activities within the framework of the project “Conservation and Management of World Heritage Sites in China”, the aim is to create a pool of well-documented good practice cases for the benefit of a wider international audience interested in the transmission of heritage to future generations.