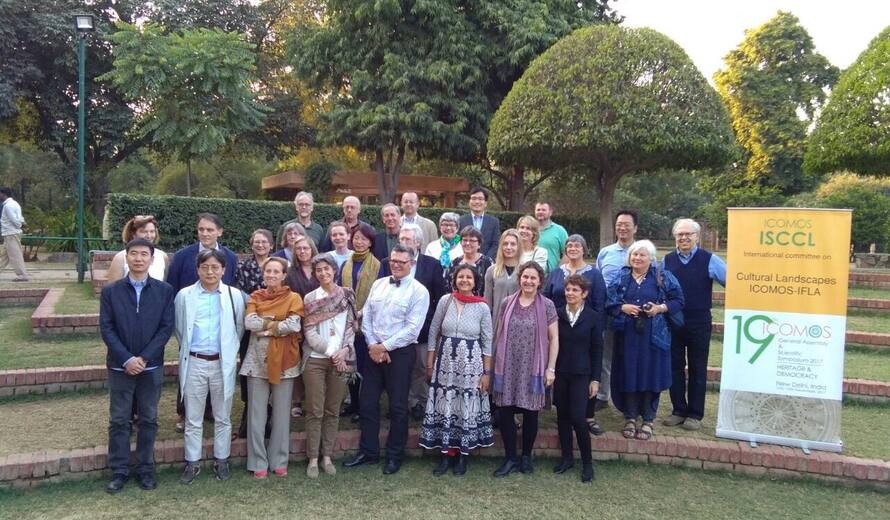 The UNESCO World Heritage Centre is participating in the Annual Meeting of the International Scientific Committee on Cultural Landscapes in New Delhi, India, on 7–8 December 2017, ahead of the 19th ICOMOS General Assembly (11–15 December 2017).

Organized by the International Scientific Committee on Cultural Landscapes ICOMOS-IFLA (ISCCL) and ICOMOS India, this two-day ISCCL Annual Meeting focused on reviewing the activities undertaken during the past year, and on planning a new set of activities for the coming year. These will focus on cultural landscape research, promotion and operational actions, including the linkage between ISCCL’s work with the UN Sustainable Development Goals, and notably the New Urban Agenda programme. Held in Sanskriti Kendra and at the India International Centre in Delhi, the ISCCL Annual Meeting provided an opportunity to re-elect the President and Vice-Presidents for the different regions of the ISCCL. It was also decided that the 2018 Annual Meeting of ISCCL would be held in Argentina, and that the 2019 meeting would take place in Ireland.

Founded in 1971, the ISCCL was first called the ‘International Scientific Committee on Historic Gardens and Sites’. In 1999, the ICOMOS Executive Committee approved a change of name to the International Scientific Committee on Cultural Landscapes. This name reflects a shift from focusing on gardens to the broader concept of ‘cultural Landscapes’, a term introduced in the 1992 Operational Guidelines for the Implementation of the World Heritage Convention. The ISCCL is a joint Committee, involving members from both ICOMOS and the International Federation of Landscape Architects (IFLA). Today, Cultural Landscapes are considered a living process that includes many different elements, both tangible and intangible, and as manifestations of popular culture, traditions, values and customs, that are a testimony of  the way in which a society has related (or relates) to the environment in which it evolved, ultimately bearing witness to human interactions with nature.

From 11 to 15 December 2017, the 19th triennal ICOMOS General Assembly will take place in New Delhi, India, accompanied by a Scientific Symposium on ‘Heritage & Democracy’. UNESCO will be represented by the Director of the Heritage Division and the World Heritage Centre, Dr Mechtild Rössler, together with staff members of the World Heritage Centre and the UNESCO Office in New Delhi.

The programme is available online.