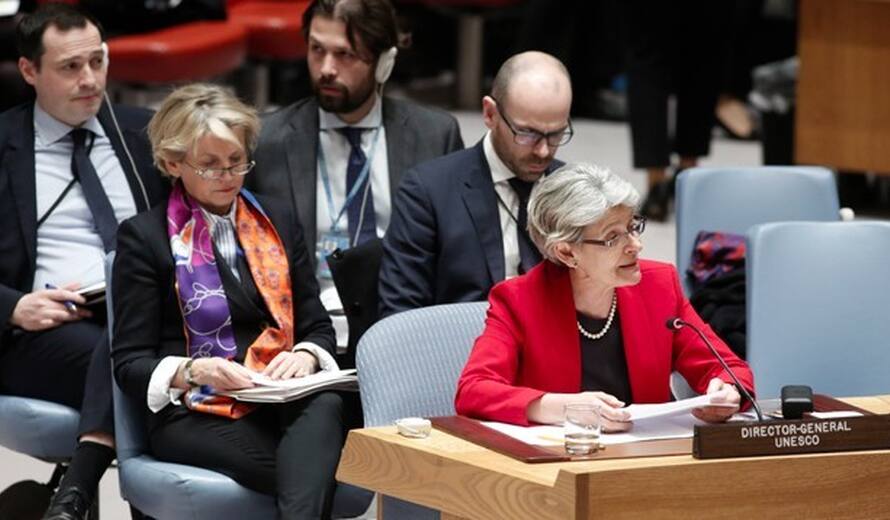 New York, 24 March 2017 - UNESCO Director-General Irina Bokova addressed today’s public briefing of the United Nations Security Council on “Maintenance of international peace and security: destruction and trafficking of cultural heritage by terrorist groups and in situations of armed conflict,” where the UN Security Council unanimously adopted resolution 2347 for the protection of heritage.

“The deliberate destruction of heritage is a war crime, it has become a tactic of war to tear societies over the long term, in a strategy of cultural cleansing. This is why defending cultural heritage is more than a cultural issue, it is a security imperative, inseparable from that of defending human lives," Director-General Bokova told the Security Council, as she spoke in support of the resolution, with Executive Director of UNODC Youri Fedotov and Commander Fabrizio Parrulli of the Carabinieri Italiani.

"Weapons are not enough to defeat violent extremism. Building peace requires culture also; it requires education, prevention, and the transmission of heritage. This is the message of this historic resolution," she added.

The Director-General went on to explain that since the adoption of UN Security Council Resolution 2199 in 2015, which prohibits trade in cultural property from Iraq and Syria, efforts are well-underway to disrupt terrorist financing through the illicit trafficking of antiquities. “In a global movement launched by UNESCO, some 50 States have strengthened their legislation and are sharing information and data, to dismantle trafficking routes, to facilitate restitutions.

“Together, UNESCO, INTERPOL, the United Nations Office on Drugs and Crime, customs services, the private sector and museums are all bolstering cooperation, coordinating new action," she said.

Commander Fabrizio Parulli of the Carabinieri Italiani and the Unite4heritage task force shared the latest data on illicit trafficking, recalling that since 1969, 800,000 artefacts have been seized by Italian forces in the fight against the financing of criminal activities.

Resolution 2347 is the first ever resolution adopted by the Security Council to focus on Cultural heritage. The unanimous support to the Resolution reflects a new recognition of the importance of heritage protection for peace and security. UNESCO is guardian of a wide array of legal instruments that are of vital importance in the protection of cultural heritage. These include the Hague Convention for the Protection of Cultural Property on the Event of Armed Conflict (1954) and its two Protocols, as well as the 1970 UNESCO Convention on the Means of Prohibiting the Preventing the Illicit Import, Export and Transfer of Ownership of Cultural Property and the Convention concerning the Protection of the World Cultural and Natural Heritage (1972).