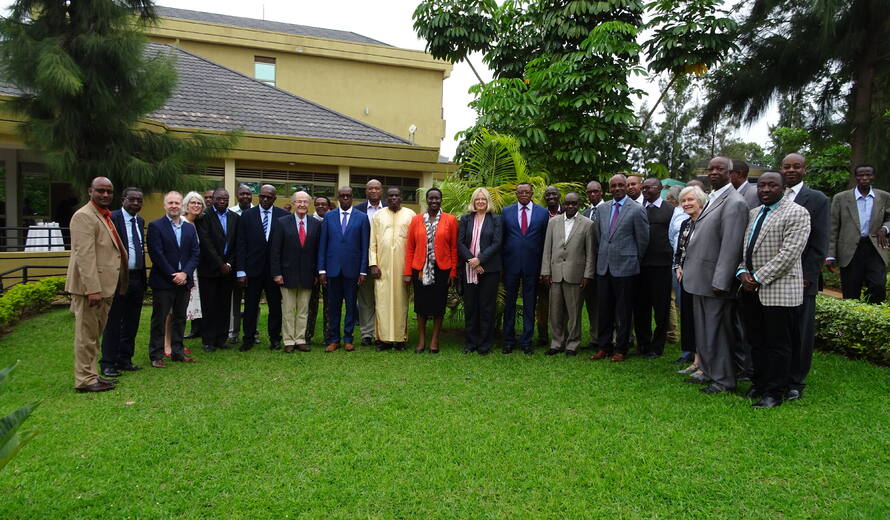 The National Centre for the Fight Against Genocide (CNLG), the Ministry of Sports and Culture of Rwanda and UNESCO organized an international experts meeting on the World Heritage Convention and Memory Sites from 7 to 9 November 2016 with support from the African World Heritage Fund (AWHF). The three-day workshop included visits to Murambi and Nyamata memorial sites, which are two of the four ‘Sites of Memorial of Genocide: Nyamata, Murambi, Bisesero and Gisozi’ included as one serial site on Rwanda’s Tentative List for potential World Heritage Listing.

Over 50 participants, including the Rwandan Minister of Sports and Culture, the Executive Secretary of the CNLG, university professors and researchers, NGOs and other stakeholders from civil society attended the workshop. They were joined by the Director of the UNESCO World Heritage Centre, representatives from the International Council on Monuments and Sites (ICOMOS) and the AWHF as well as World Heritage experts from South Africa, Mali and Senegal to reflect on sites of memory in the framework of the 1972 UNESCO World Heritage Convention. Case studies from Robben Island and Island of Goree World Heritage sites were considered alongside examples from UNESCO’s Memory of the World Programmeand the International Coalition of Sites of Conscience.

During the opening ceremony, the Minister of Sports and Culture, H.E. Ms. Julienne Uwacu expressed the government’s commitment to preparing a successful nomination file to ensure World Heritage status for the Sites of Memorial of Genocide. She also informed participants of the national authorities’ willingness to consider nominating other heritage sites in Rwanda that could be worthy of World Heritage status such as the volcanoes and gorilla habitats bordering the Democratic Republic of the Congo.

Following the discussions, the CNLG and UNESCO presented draft recommendations from the workshop. These included the need to form a steering committee to focus on the most appropriate way forward for the Sites of Memorial of Genocide; ensuring full legal protection and management for the sites; integrating genocide education into national curriculum; reaching out to new partners and donors for an interdisciplinary and inter-generational approach to memory heritage; and involving the multiple voices of local communities as well as the diaspora in site interpretation and safeguarding.