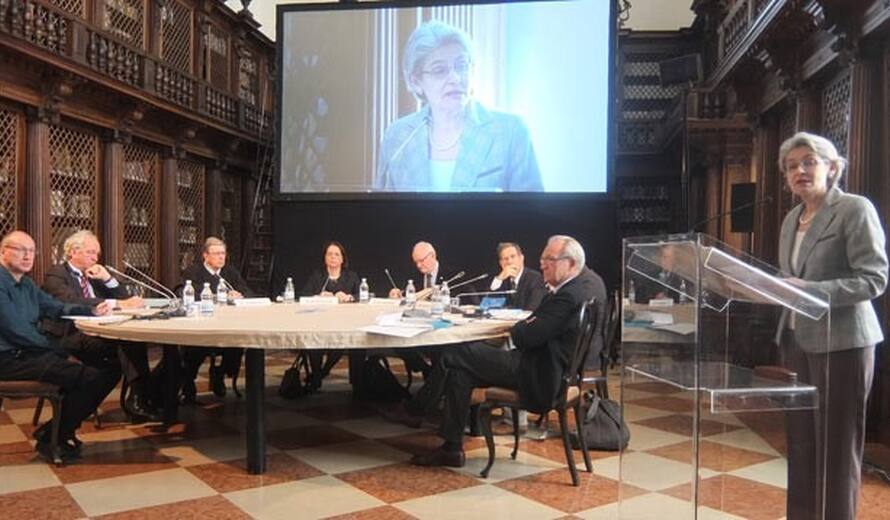 On 3 and 4 November, fifty years after the 1966 Venice flood and the International Safeguarding Campaign launched by UNESCO, the Director-General, Irina Bokova, undertook a visit to Venice, Italy.

This visit was an opportunity to mark the longstanding cooperation with Italy and to express UNESCO’s support to its government and people after the country was struck by a series of powerful earthquakes – causing human casualties and considerable damage to heritage, notably in Amatrice and Norcia.

In Venice, the Director-General opened an international conference at the Fondazione Cini on the future of the lagoon city and the sustainable management of its heritage, entitled “Sustainability of local commons with a global value: the case of Venice and its lagoon”.

The Director-General reiterated UNESCO’s determination to support the Italian authorities in the safeguarding of the World Heritage site of Venice today, in response to the rise of sea level and tourist pressure, which is expected to grow dramatically. This event took place in the presence of Mr Giovanni Bazoli, President of the Cini Foundation, and Ms Ilaria Borletti Buitoni, Undersecretary of the Ministry of Cultural Heritage and Activities and Tourism. An exhibition entitled “Venezia 1966-2016. Dall’ emergenza al recupero del patrimonio culturale. Storie e immagini dagli archivi della città” (From the emergency to the restoration of cultural heritage) is also organized to commemorate this event at the Marciana National Library).

The Director-General recalled the depth of UNESCO’s engagement in Venice since the launch of the International Safeguarding Campaign in 1966, which resulted in outstanding cooperation and worldwide support for the inventorying and restauration of major monuments within the city.

The Director-General held a one-hour bilateral working meeting with the Mayor of the city, Mr Luigi Brugnaro, to discuss the way forward. “We all agree on the need to alleviate the immense touristic pressure on the city, and we will work with all those ready to provide concrete proposals to build a sustainable future for the city,” said the Mayor.

“We are all in this together, in the same team for the protection of Venice,” said the Director-General.

“Venice is a shared heritage of outstanding universal value, it must remain also a dynamic place where all Venetian can live and work. UNESCO is deeply respectful of Italian efforts and is determined to support the people of Venice in this endeavor,” said Irina Bokova. The Director-General and the Mayor agreed to meet in the following weeks, to continue this discussion and come up with concrete proposals in view of the next meeting of the World Heritage Committee.

Irina Bokova also met with Undersecretary Ilaria Borletti Buitoni to discuss the vital cooperation with Italian authorities, which is more important than ever. “Venice calls on us to work together, bringing together Ministries of Culture, Foreign Affairs, Environment and Transport, there is no other way but joint cooperation and a culture of dialogue,” concluded the Director-General.

During her visit, the Director-General highlighted the diversity and dynamism of city, as a cultural powerhouse, and the potential of cooperation with UNESCO to promote creative industries as a source of pride and jobs for the city. She discussed these subjects with the President of the Biennale of Venice, Mr Paolo Baratta, and visited the Seguso Glass Factory in Murano.

While in Venice, the Director-General also gave a lecture at the Ca’ Foscari University on the theme “Fostering Cultural Diversity as a shared heritage to build Peace”, in the presence of Professor Tiziana Lippiello, Pro-Rector of the Ca’Foscari University.

“Venice has always been a crossroads of cultures, bringing together people from across the world, at the western end of the silk roads, sharing goods and ideas. We need to learn from the lessons of Venice, and strengthen such cultural literacy to live in peace in the world today,” said the Director-General. On this occasion, the Director-General received an Honorary fellow of Ca’ Foscari University of Venice.

UNESCO Office in Venice
UNESCO joins Venice in its remembrance of the great flood of 1966, the Aqua Granda