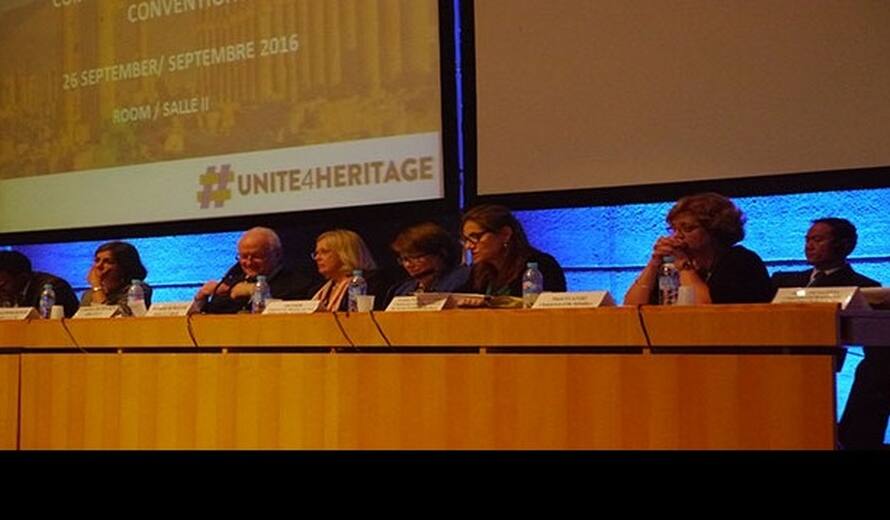 Destruction of cultural heritage has reached unprecedented levels. In light of this, and culture’s unique contribution to peace and sustainable development, the ratification, implementation and visibility of UNESCO’s six Culture Conventions are more important than ever.

This was the focus of the Second Meeting of the Chairpersons of the Committees of UNESCO Culture Conventions at UNESCO Headquarters on 26 September 2016, where two key themes were addressed: safeguarding cultural heritage and cultural diversity in times of conflict; and the role of the Conventions in the 2030 Agenda for Sustainable Development.

Ms Artemis Papathanasiou, Chairperson of the Committee of the Second Protocol to the Hague Convention of 1954 for the Protection of Cultural Property in the event of armed conflict, flagged the alarming situation in countries such as Iraq and Syria and said “we have witnessed a cultural cleansing … protecting cultural heritage in the event of armed conflict is more urgent than ever”. She underscored the complementary goals of several Conventions to address illicit trafficking in cultural property flowing from conflict situations.

“It is important to give visibility to the situation – to raise awareness, consciousness and action world wide” declared Ms Maria Vlazaki, Chairperson of the Subsidiary Committee of the Meeting of States Parties to the UNESCO 1970 Convention on the Means of Prohibiting and Preventing the Illicit Import, Export and Transfer of Ownership of Cultural Property.  She recalled obligations under the UN Security Council Resolutions 2199 and 2253 and the necessary cooperation and information sharing with INTERPOL, customs officials and the art markets.

In discussing the interplay among UNESCO Conventions, Ms Lale Ulker, Chairperson of the World Heritage Committee, UNESCO 1972 Convention Concerning the Protection of the World Cultural and Natural Heritage, emphasized that “we have a strong set of legal measures and policy tools to address today’s challenges. Current threats harm not only heritage, but also cultural diversity, pluralism and intercultural dialogue which support lasting peace and sustainable development.”  Noting that principles of sustainable development are mainstreamed in national processes related to World Heritage, she informed that the Committee is preparing a post conflict recovery strategy.

H.E. Alejandro Palma Cerna, President of the Meeting of States Parties to the 2001 Convention on the Protection of the Underwater Cultural Heritage in his message relayed that “conflict, political turmoil, adverse geopolitical and economic situations, and rapid and unsustainable urban development along coasts damage underwater cultural heritage”.  Echoing the call to bolster exchanges and synergies among the Conventions, he called for greater cooperation, and monitoring to prevent pillage and illicit trafficking.

Mr Yonas Desta Tsegaye, Chairperson of the Committee of the 2003 Convention on the Safeguarding of the Intangible Cultural Heritage, noted that “safeguarding living heritage in emergencies is a growing concern”.  He shared Operational Directives that set out the safeguarding of intangible cultural heritage and sustainable development, and stressed the normative as well as the operational frameworks within which the six Conventions could work together.

The meeting showed clearly how each of UNESCO’s Culture Conventions directly support Member States in the implementation of the 2030 Agenda. In particular H.E. Mr Laurent Stefanini, Vice Chair of the Intergovernmental Committee of the UNESCO 2005 Convention on the Protection and Promotion of the Diversity of Cultural Expressions, highlighted the strong framework for sustainable development.  Promotion of cultural and creative industries addresses quality education, gender equality, sustainable cities, and job creation.  Implementation by Parties to the Convention brings culture tangibly into development policies and practices.  “We have to reinforce and demonstrate the values of culture, and its potential for each and every one of us” he said.