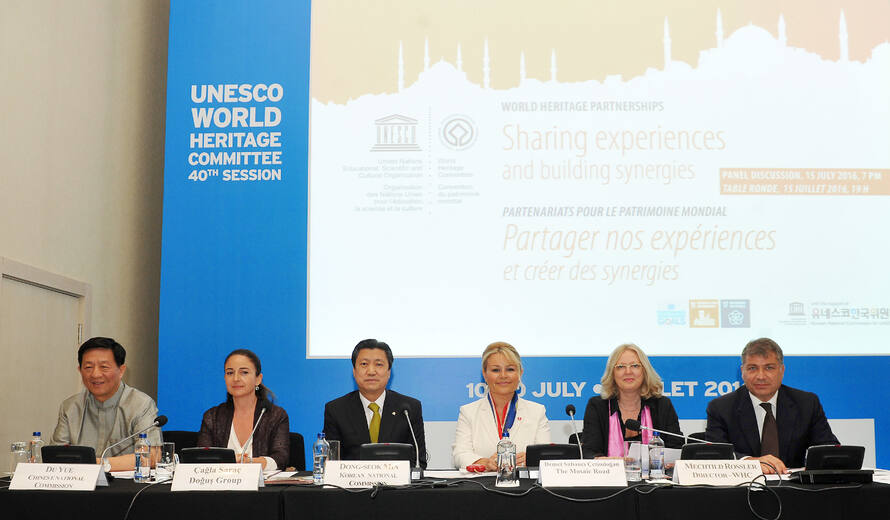 A World Heritage partners’ event and panel discussion took place on the 15th of July in Istanbul sponsored by the Korean National Commission for UNESCO, on the occasion of the 40th session of the World Heritage Committee

The Partners' event, for the third consecutive year, provided a platform for discussing private sector partners’ contributions to World Heritage conservation and promotion activities. It allowed private companies, foundations and institutional partners to share experiences and best practices in World Heritage conservation and sustainable development, as well as meet Committee members and representatives of countries’ heritage authorities attending the session.

Recognizing the increasing importance of involving the private sector in the preservation of World Heritage sites and keeping in mind the UN’s 2030 Global Agenda for sustainable development, the panel session provided an opportunity to present models for successful partnerships in support of World Heritage, to discuss creative approaches to sustainable development and explore new opportunities for cooperation.

Presentations were given by Ms Demet Sabanci, founding Chairwoman of Turkey ONE Association, who presented the ‘Mosaic Road’ project that the foundation initiated in cooperation with local authorities in order to protect and promote the invaluable mosaics found in southeastern Turkey.

Mr Dong-seok Min, Secretary-General of the Korean National Commission for UNESCO, presented their fundraising and partnership development initiative which has been undertaken to better support the implementation of UNESCO’s missions. The fundraising activities have not only financially supported World Heritage sites but also helped to raise public awareness in Korea concerning World Heritage preservation, especially among young people.

Ms Cagla Sarac, Academic & Art Advisor at Dogus Group, one of Turkey’s largest business conglomerates, presented the unique public-private partnership sponsorship model that the group has undertaken with the Ministry of Culture and Tourism of Turkey in support of the archaeological site of Göbeklitepe in Turkey. Dogus Group has committed a considerable amount of financial and in-kind resources for the conservation of the site as well as for the empowerment of women within the local communities and this example was presented to inspire future partnership models in the field.

Mr Du Yue, Secretary General of the Chinese National Commission for UNESCO, presented the partnership between UNESCO and Hainan Airlines, via its Cihang Foundation, on the Kathmandu rehabilitation project. The presentation gave insights on how both organizations worked together after the devastating earthquake that hit Nepal in April 2015 with the aims of repairing architectural damage and creating jobs.

The presentations were followed by discussions focused on protecting heritage at risk, supporting the implementation of the Sustainable Development Goals (SDGs) and education about heritage values as a way to prevent violent extremism and promote global citizenship.