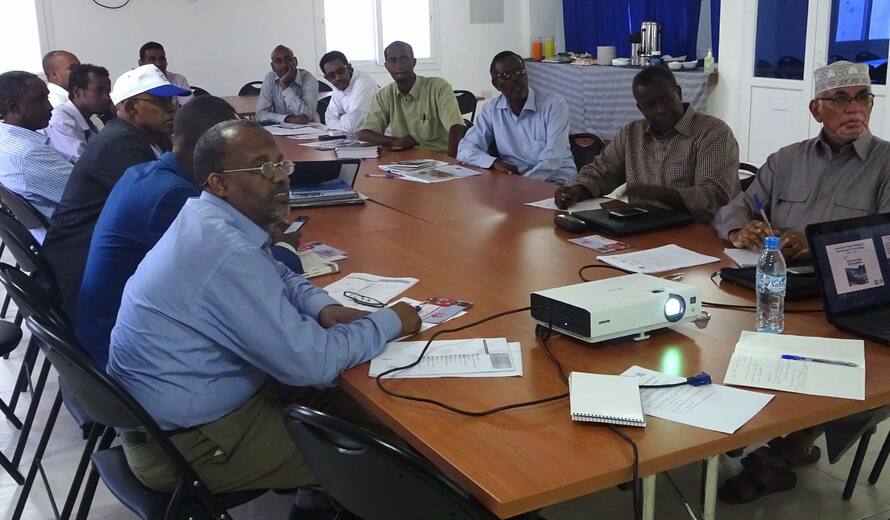 Policy makers and advisors from the Federal Government of Somalia and national heritage experts met on 6 June 2016 in Mogadishu to consider the benefits of ratifying the UNESCO World Heritage Convention. During a technical workshop organised by the Ministry of Education, Culture and Higher Education together with the Italian NGO CISP as part of the European-Union funded project ‘Reviving Culture, Building Peace in Mogadishu’, UNESCO led a group of 20 stakeholders through the process and benefits of ratifying the UNESCO 1972 World Heritage Convention in the context of peace-building and sustainable development.

The workshop was opened by Mr Yusuf Ahmed, Permanent Secretary from the Ministry of Education, Culture and Higher Education, and Mr. Yusuf Ismail, the Director General of Culture. Both officials proclaimed the government’s intention to ratify the 1972 Convention Concerning the Protection of the World Cultural and Natural Heritage. Mr. Ahmed stated that plans for ratification will be included in Somalia’s two-year National Development Plan, currently under preparation.

During the workshop, Dr. Yusuf Osman, President of the Somali Academy of Science, Arts and Literature, lamented the important cultural heritage sites that have been destroyed through civil conflict in Somalia. Numerous participants noted Somalia’s historic cities, mosques and rock art sites that merit World Heritage status, including the capital city of Mogadishu.

In addition to outlining the implementation of the World Heritage Convention, its thematic programmes, resources and capacity-building strategy, UNESCO recalled the findings and recommendations of the UNESCO-EU 2013 Scoping Study on the Culture Sector in Somalia. One of the recommendations of the Study was to form a ‘Friends of Somalia Culture Group’ with international organizations, donors, NGOs, civil society actors, and individuals involved in the Culture Sector in Somalia, which UNESCO launched in 2015. During the workshop, UNESCO announced the next meeting of the ‘Friends of Somalia Culture Group,’ which is scheduled for end-September 2016, and aims to develop an action plan and fundraising strategy for reviving the culture sector in Somalia.

During the workshop, the Special Advisor to the President recommended forming a task force to accelerate the ratification process. UNESCO is working closely with this new inter-ministerial task force to provide the information and guidance necessary for the ratification of the 1972 World Heritage Convention.

As the last remaining African Member State of UNESCO yet to ratify the World Heritage Convention, Somalia’s accession would be a strong symbol not only for the people of Somalia and the region of Africa but for the international community, who would then be called upon to join Somalia in preserving and promoting its rich heritage resources.