From Kabul to Rome: International experts discuss challenges for heritage and sustainability 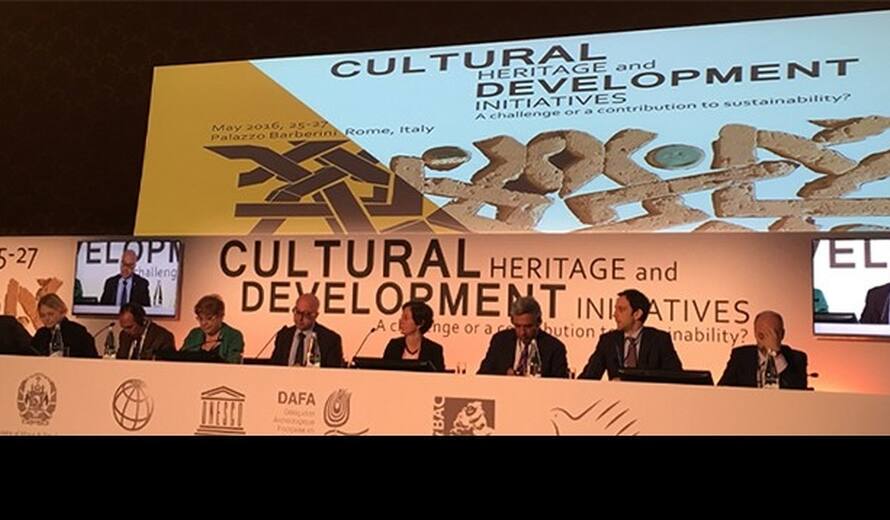 From 25 to 27 May, an international conference entitled “Cultural Heritage and Development Initiatives: a Challenge or a Contribution to Sustainability?” was held at the Palazzo Barnerini in Rome.  Organized by the UNESCO Office in Kabul together with the Islamic Republic of Afghanistan and the World Bank, in cooperation with the Government of Italy, it focused on the relationship between archaeology, landscape protection and development initiatives.

The Conference is part of UNESCO’s on-going project ‘Afghanistan Heritage & Extractive Industries Development Initiative”. Financed by the World Bank via the Afghan Ministries of Mines & Petroleum and of Finance, it aims to protect cultural heritage sites within mining areas in Afghanistan while ensuring that development initiatives are compatible, with a balanced approach to address challenges before natural resources exploration begin for economic gain.

Opening the event, Mr. Antimo Cesaro, Undersecretary of the Italian Ministry of Cultural Heritage & Activities & Tourism, recalled that the rich cultural heritage of Afghanistan has been subject to loss and deliberate destruction during the last three decades of conflict. He underscored the commitment to strengthen the partnership amongst Italy, Afghanistan and UNESCO for the protection of cultural heritage within new development initiatives.

Mr. Mohammad Humayon Qayoumi, Chief Advisor of Infrastructure and Technology to the President of Afghanistan said that “Protection and promotion of the cultural and archaeological richness of Afghanistan implicitly celebrates the collective sovereignty of a nation, owned by the people. Saving historical artefacts and properties will help empower Afghans and foster a sense of shared responsibility for our historical and cultural legacy. We must raise local and national stakeholders’ awareness of the importance of the cultural and natural resources of the country for sustainable development.”

Some 200 participants from both developed and post-conflict/developing countries discussed the threats posed to cultural heritage, such as massive urbanization, and how cultural heritage preservation can be reflected in integrated modernization processes to achieve the overall goal of sustainable economic and social development. Ms. Patricia McPhillips, Director and Representative at the UNESCO Office in Kabul, emphasized that “culture is not against modernization.”  Mr. Michael Stanley of the World Bank highlighted the insufficient attention paid to cultural policies, especially in post-conflict and developing countries.  He stressed the importance of cultural heritage protection within national development initiatives.

As a result of the rich debates, a Recommendation was adopted unanimously by the Conference participants.