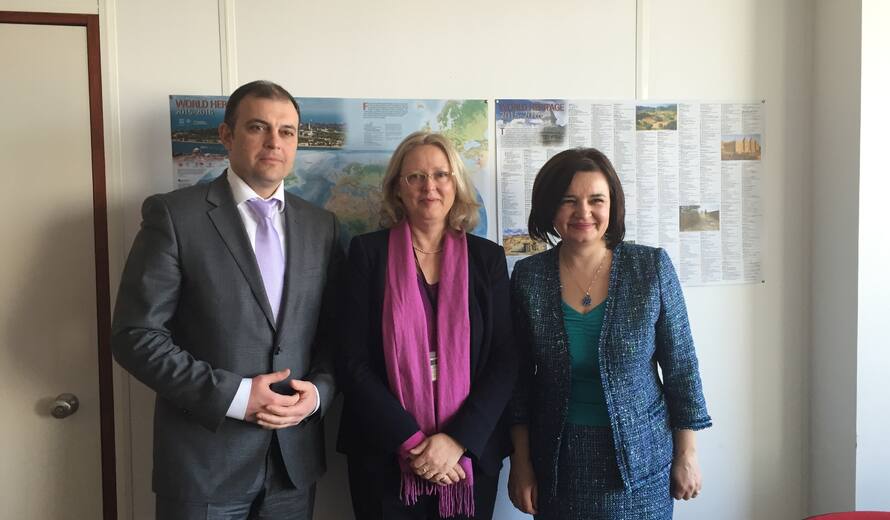 The Minister of Culture from the Republic of Moldova, Ms Monica Babuc, visited the World Heritage Centre on 17 March 2016 to discuss with the Director, Ms Mechtild Rössler, and her colleagues collaboration on identifying, protecting and transmitting heritage from her country. The topic of economic benefits from sustainable tourism development for local communities was also covered.

Currently the Republic of Moldova has only one World Heritage site, the Struve Geodetic Arc, inscribed in 2005 on UNESCO's World Heritage List as a shared heritage among 10 States Parties.

The Struve Arc is a chain of survey triangulations stretching from Hammerfest in Norway to the Black Sea, through 10 countries and over 2,820 km. These are points of a survey, carried out between 1816 and 1855 by the astronomer Friedrich Georg Wilhelm Struve, which represented the first accurate measuring of a long segment of a meridian. This helped to establish the exact size and shape of the planet and marked an important step in the development of earth sciences and topographic mapping. It is an extraordinary example of scientific collaboration among scientists from different countries, and of collaboration between monarchs for a scientific cause. The original arc consisted of 258 main triangles with 265 main station points. The listed site includes 34 of the original station points, with different markings, i.e. a drilled hole in rock, iron cross, cairns, or built obelisks.