The Monastery of the Dominicans of Batalha was built to commemorate the victory of the Portuguese over the Castilians at the battle of Aljubarrota in 1385. It was to be the Portuguese monarchy's main building project for the next two centuries. Here a highly original, national Gothic style evolved, profoundly influenced by Manueline art, as demonstrated by its masterpiece, the Royal Cloister. 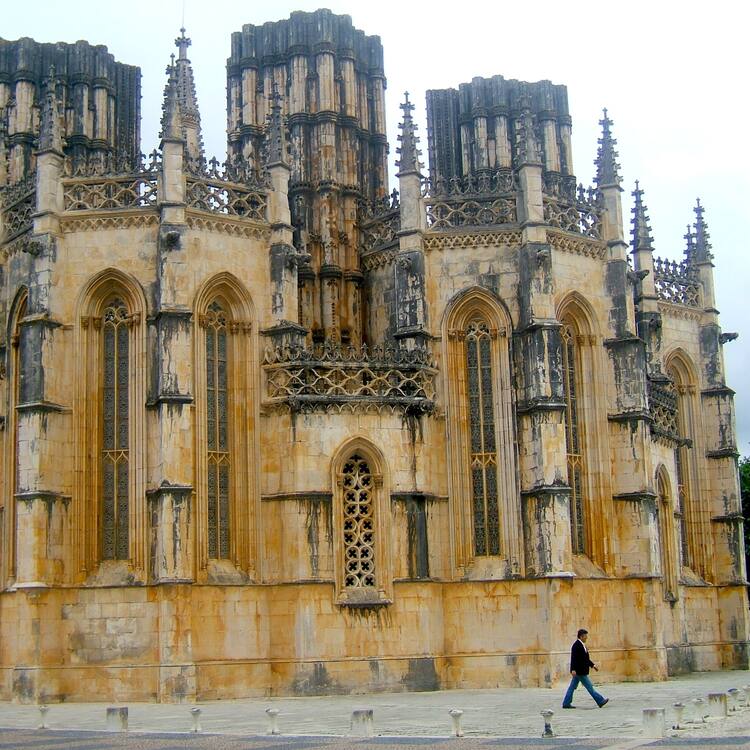 Constructed in fulfilment of a vow by King João to commemorate the victory over the Castilians at Aljubarrota (15 August 1385), the Dominican Monastery of Batalha, in the centre of Portugal, is one of the masterpieces of Gothic art. The greater part of the monumental complex dates from the reign of João I (1385-1433), when the church (finished in 1416), the royal cloister, the chapter-house, and the funeral chapel of the founder were constructed.

The design has been attributed to the English architect Master Huguet. The chapel's floor plan consists of an octagonal space inserted in a square, creating two separate volumes that combine most harmoniously. The ceiling consists of an eight-point star-shaped lantern. The most dramatic feature is to be found in the centre of the chapel: the enormous medieval tomb of Dom João I and his wife, Queen Philippa of Lancaster. Bays in the chapel walls contain the tombs of their sons, among them Prince Henry the Navigator.

The main entrance of the church is through the porch on the west facade. On both sides of this portal are sculptures of the twelve apostles standing on consoles. In the centre is a high relief statue of Christ in Majesty surrounded by the Evangelists, framed by six covings decorated with sculptures of biblical kings and queens, prophets and angels holding musical instruments from the Middle Ages. This great profusion of sculptures is completed by the crowning of the Virgin Mary.

As a monument charged with a symbolic value from its foundation, the Monastery of Batalha was, for more than two centuries, the great workshop of the Portuguese monarchy. It is not surprising that the most characteristic features of a national art would have been determined there, during both the Gothic and the Renaissance periods. Batalha is the conservatory of several privileged expressions of Portuguese art: the sober architectural style of the end of the 14th century, with the stupendous nave of the abbatial, of which the two-storey elevation, with broad arcades and high windows, renders most impressive; the exuberant aesthetic of the capelas imperfeitas; the flamboyant arcades embroidered in a lace-work of stone: the Manueline Baroque even more perceptible in the openwork decor of the tracery of the arcades of the royal cloister than on the immense portal attributed to Mateus Fernandes the Elder; and finally, the hybrid style of João de Castilho, architect of the loggia constructed under João III (1521-1557).

Criterion (i): The Dominican Monastery of Batalha is one of the absolute masterpieces of Gothic art.

Criterion (ii): The Monastery of Batalha was, for more than two centuries, an important workshop of the Portuguese monarchy. The most characteristic features of a national art were determined here, both during the Gothic and the Renaissance periods.

Within the boundaries of the 0,98 ha property are located all the necessary elements to express the Outstanding Universal Value of the Monastery of Batalha. To reduce the traffic in the old main road (EN1) which crossed the site’s buffer zone, a new road (A14) was built outside the property and a curtain of trees was planted to reduce possible pollution impacts on the monument.

The Monastery of Batalha preserves its authenticity by maintaining its original plans, materials and social and religious significance. The property’s most relevant attributes have been preserved and even reinforced as far as quality is concerned. Conservation and restoration of all stained glass windows and mural paintings in the Royal Cloister and in the Sacristy have been carried out according to the Nara Document on Authenticity. Besides, the Escola Nacional de Artes e Ofícios da Batalha (School of Arts and Crafts) has been supllying skilled workers both for the conservation and restoration of stone elements and stained glass windows.

Ecclesiastical authorities have contributed to the preservation and enhancement of this property, by using the church for religious ceremonies.

Since 9 April 1921, the Chapter House has a permanent guard of honour and is lit by a lamp symbolizing the homeland flame in homage to the Unknown Soldier protected by the mutilated “Christ of the Trenches”.

The Monastery of Batalha was classified as a national monument by a Decree published in the government Journal no. 14 of 17 January 1907.

In order to ensure enforcement of the Law establishing the bases for the policy and system of rules for protection and enhancement of cultural heritage (Law no. 107 of 8 September 2001), Decree no. 140 of 15 June 2009 established the legal framework for studies, projects, reports, works or interventions upon classified cultural assets. It established, as a rule, the need for a previous and systematic assessment, monitoring and weighing of any works that are likely to affect the site’s integrity so as to avoid any disfigurement, dilapidation, loss of physical features or authenticity. This is ensured by appropriate and strict planning, by qualified staff, of any techniques, methodologies and resources to be used for implementation of works on cultural properties.

Furthermore, there is a responsible management policy that has focused on environmental solutions and on maintaining open dialogue and building partnerships with, among others, the municipality so as to overcome the negative effects of undue use of the monument’s surrounding area.

Similarly, according to Decree no. 309 of 23 October 2009, buffer zones are considered special protection zones benefitting from adequate restrictions for the protection and enhancement of cultural properties.

To preserve the authenticity and integrity of the whole monumental complex within a work plan involving the local community is the key management goal. It also takes into account UNESCO’s recommendations in the State of Conservation Report from 1990, namely conservation measures that have been taken to solve the problem of distortion of the lead work and broken panes in the stained-glass windows.

All the interventions that have been implemented or are foreseen comply with current legislation, as well as with strict technical and scientific criteria. There is a special focus on the treatment and rehabilitation of the area surrounding the monument, as these works will be ensured by local organisations involving both the municipality and the local community.

Management of this complex is ensured by the decentralized services of the Directorate General for Cultural Heritage (DGPC), the central administration department responsible for cultural heritage. Conservation, enhancement and safeguarding measures are ensured by DGPC that is responsible for drawing up an annual programme and implementing it so as to secure the future of the monument.

Furthermore, an interpretation centre has been established. Today visitors have access to more areas and to new information that will ensure a better and more integrated knowledge of the World Heritage property.