The site encompasses a group of five frontier mission complexes situated along a stretch of the San Antonio River basin in southern Texas, as well as a ranch located 37 kilometres to the south. It includes architectural and archaeological structures, farmlands, residencies, churches and granaries, as well as water distribution systems. The complexes were built by Franciscan missionaries in the 18th century and illustrate the Spanish Crown’s efforts to colonize, evangelize and defend the northern frontier of New Spain. The San Antonio Missions are also an example of the interweaving of Spanish and Coahuiltecan cultures, illustrated by a variety of features, including the decorative elements of churches, which combine Catholic symbols with indigenous designs inspired by nature. 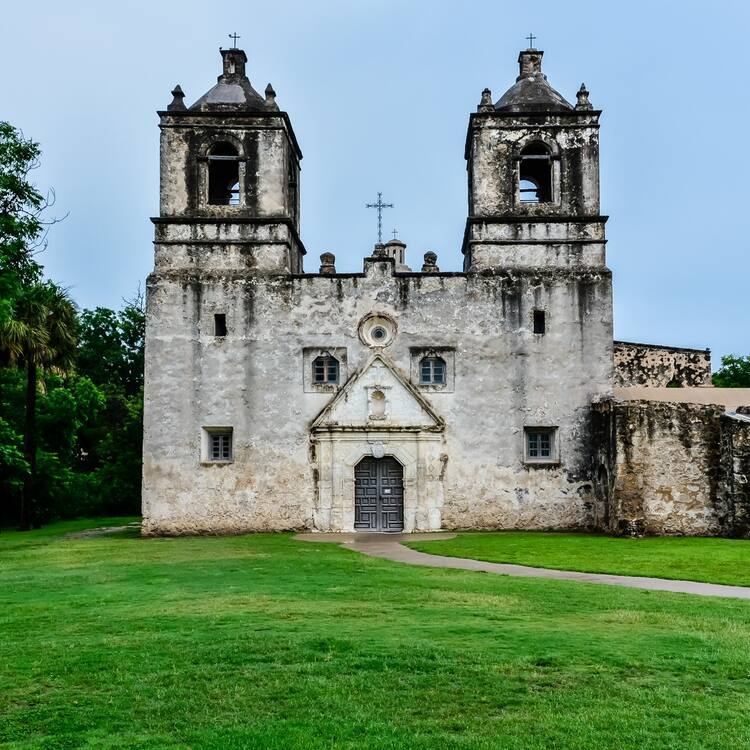 The San Antonio Missions are a group of five frontier mission complexes situated along a 12.4-kilometer (7.7-mile) stretch of the San Antonio River basin in southern Texas. The complexes were built in the early eighteenth century and as a group they illustrate the Spanish Crown’s efforts to colonize, evangelize and defend the northern frontier of New Spain. In addition to evangelizing the area’s indigenous population into converts loyal to the Catholic Church, the missions also included all the components required to establish self-sustaining, socio-economic communities loyal to the Spanish Crown.

The missions’ physical remains comprise a range of architectural and archaeological structures including farmlands (labores), cattle grounds (ranchos), residences, churches, granaries, workshops, kilns, wells, perimeter walls and water distribution systems. These can be seen as a demonstration of the exceptionally inventive interchange that occurred between indigenous peoples, missionaries, and colonizers that contributed to a fundamental and permanent change in the cultures and values of all involved, but most dramatically in those of the Coahuiltecans and other indigenous hunter-gatherers who, in a matter of one generation, became successful settled agriculturists. The enclosed layout of each mission complex and their proximity to each other, the widespread sharing of knowledge and skills among their inhabitants, and the early adoption of a common language and religion resulted in a people and culture with an identity neither wholly indigenous nor wholly Spanish that has proven exceptionally persistent and pervasive.

Criterion (ii): The San Antonio Missions are an example of the interweaving of the cultures of the Spanish and the Coahuiltecan and other indigenous peoples, illustrated in a variety of elements, including the integration of the indigenous settlements towards the central plaza, the decorative elements of the churches which combine Catholic symbols with indigenous natural designs, and the post-secularization evidence which remains in several of the missions and illustrates the loyalty to the shared values beyond missionary rule. The substantial remains of the water distribution systems are yet another expression of this interchange between indigenous peoples, missionaries, and colonizers that contributed to a fundamental and permanent change in the cultures and values of those involved.

The five missions were selected based on their geographical and functional relationship in the San Antonio River Basin. Although founded independently, the missions are located at a distance of less than five kilometres from each other and shared a common approach to defence against attacks. The missions as a group, and not individually, combine all functional elements needed to understand their purpose and role in colonization, evangelization and eventual secularization. The property is of sufficient size to adequately ensure the representation of the Outstanding Universal Value. Several serial components are affected by development pressures and past changes to their setting have had negative impacts on integrity. Especially in Mission Valero (the Alamo) considerable urban development in downtown San Antonio has obscured the visual connection to the river setting. However, development threats are reduced by urban planning restrictions and the property is free of immediate threats at present.

The missions have evolved over time and not all remains which characterize the missions today date back to the time before secularization. Especially in the 19th century, structures were added to the complexes and these were even extended or modernized in the 20th century. However, the stratigraphy of the different consecutive additions is clearly legible in most sites and early physical remains can be easily identified. The churches with the exception of Mission San José retain authenticity of material, design and workmanship in relation to their original construction. Four of the serial components have retained some authenticity in use and function as their church complexes are still used for church services. Missions Espada, San Juan and the Rancho de las Cabras illustrate a very high degree of authenticity in setting. Mission Valero is the only serial component in which authenticity is limited in a number of aspects. However, it contributes an important element to the series as the foundation of the San Antonio Missions, the first one to be created by the Franciscan Order and the first enclave that acted as a pole of attraction to the rest

The Missions of San Antonio are protected by federal laws and designations, Texas State laws and designations, City of San Antonio ordinances, and cooperative agreements, easements, and deed restrictions. Mission Valero (the Alamo), Mission Espada and Mission Concepción have been designated as National Historic Landmarks. Mission San José is a National Historic Site and the other components are on the National Register of Historic Places. At the federal level, Mission San José is also designated as a Texas State Historical Site and all five missions are Texas State Antiquities Landmarks as well as on a local level City of San Antonio Local Landmarks. The Texas Historical Commission must review in advance any modifications proposed for the structural elements located in the property.

The United States National Park Service manages all the property within the boundaries of the San Antonio Missions National Historical Park, which was established under Public Law 95-629 (1978) and Public Law 101-628 (1990). The four mission churches within the National Historical Park are owned and operated by the Archdiocese of San Antonio. The State of Texas owns the property of Mission Valero/The Alamo. Management of the series is complex and based on an ownership structure which includes nine different owners. These remain responsible for the day-to-day management of their respective properties. For overarching issues which concern all serial components of the property, an advisory committee was established in 2012 to advise on preservation, interpretation and outreach activities and to make recommendations on frameworks for continued cooperation.

A document of management objectives describes all institutions that partner in the management of the property and broadly defines their contributions and fields of responsibility. This document has been adopted by all nine property owners and provides a general basis for the coordinated management. There is continual monitoring for potential threats to the property to ensure none jeopardize the attributes that sustain the property’s Outstanding Universal Value. Perhaps the most significant potential threat is the rapid growth and development of the City of San Antonio. The San Antonio River is an important connecting element of the properties and the buffer zone regulations ensure that this special role is retained.
News