Xinjiang Tianshan comprises four components—Tomur, Kalajun-Kuerdening, Bayinbukuke and Bogda— that total 606,833 hectares. They are part of the Tianshan mountain system of Central Asia, one of the largest mountain ranges in the world. Xinjiang Tianshan presents unique physical geographic features and scenically beautiful areas including spectacular snow and snowy mountains glacier-capped peaks, undisturbed forests and meadows, clear rivers and lakes and red bed canyons. These landscapes contrast with the vast adjacent desert landscapes, creating a striking visual contrast between hot and cold environments, dry and wet, desolate and luxuriant. The landforms and ecosystems of the site have been preserved since the Pliocene epoch and present an outstanding example of ongoing biological and ecological evolutionary processes. The site also extends into the Taklimakan Desert, one of the world’s largest and highest deserts, known for its large dune forms and great dust storms. Xinjiang Tianshan is moreover an important habitat for endemic and relic flora species, some rare and endangered. 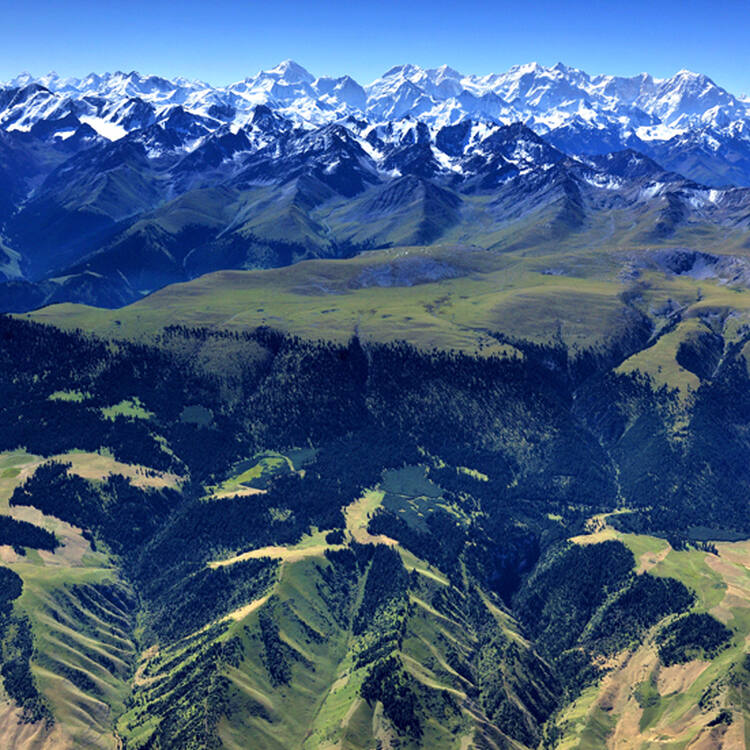 Xinjiang Tianshan is a serial property consisting of four components totaling 606,833 hectares, with buffer zones totaling 491,103 hectares located in the People’s Republic of China in the Xinjiang Tianshan, the eastern portion of the Tianshan mountain range. The four components are located along the 1,760 kilometers of the Xinjiang Tianshan, a temperate arid zone surrounded by Central Asian deserts. The property was nominated under criterion (vii) for its outstanding beauty and superlative natural features and criterion (ix) for capturing a range of biological and ecological processes.

The property has outstanding scenic values and many superlative natural features – from red bed canyons to high peaks and glaciers to beautiful wetlands, meadows and steppe. The visual impact of these features is magnified by the stark contrasts between the mountain areas and vast Central Asian deserts, and between the dry south slopes and the much wetter north slope. Xinjiang Tianshan is also an outstanding example of ongoing biological and ecological evolutionary process in a temperate arid zone. Altitudinal vegetation distributions, significant differences between north and south slopes, and diversity of flora, all illustrate the biological and ecological evolution of the Pamir-Tian Shan Highlands. Xinjiang Tianshan has outstanding biodiversity and is important habitat for relic species, and numerous rare and endangered species, as well as endemic species. It provides an excellent example of the gradual replacement of the original warm and wet flora by modern xeric Mediterranean flora.

Criterion (vii): The Tianshan is a large mountain range in Central Asia stretching about 2,500 kilometers. It is the largest mountain chain in the world’s temperate arid region, and the largest isolated east-west mountain range globally. The Xinjiang portion of the Tianshan runs east-west for 1,760km and is a mountain range of outstanding natural beauty. The Xinjiang Tianshan is anchored in the west by the highest peak in the Tianshan, Tomur Peak at 7,443 meters, and in the east by Bogda Peak at 5,445 meters. The range lies between two Central Asian deserts, Junggar Desert in the north and the Tarim Desert in the south. The beauty of the Xinjiang Tianshan lies not only in its spectacular snow-capped mountains and glacier-capped peaks, beautiful forests and meadows, clear rivers and lakes and red bed canyons, but also in the combination and contrast between the mountain elements and the vast deserts. The stark difference of bare rocks on its south slope and luxuriant forest and meadow on the north creates a striking visual contrast of environments which are hot and cold, dry and wet, desolate and luxuriant – and of exceptional beauty.

Criterion (ix): Xinjiang Tianshan is an outstanding example of ongoing biological and ecological evolutionary process in a temperate arid zone. The landforms and ecosystems have been preserved since the Pliocene epoch because of the Tianshan’s position between two deserts and its Central Asian arid continental climate, which is unique among the world's mountain ecosystems. Xinjiang Tianshan has all the typical mountain altitudinal zones of a temperate arid zone, reflecting the moisture and heat variations at different altitudes, gradients and slopes. The property is an outstanding example for the study of biological community succession in mountain ecosystems in an arid zone undergoing global climate change. Xinjiang Tianshan is also an outstanding representative of biological and ecological evolution in the Pamir-Tian Shan Highlands. Altitudinal vegetation distributions, significant differences between north and south slopes, and diversity of flora, all illustrate the biological and ecological evolution of the Pamir-Tian Shan Highlands. The property is also an important habitat for relic species, and numerous rare and endangered species, as well as endemic species. It is representative of the process whereby the original warm and wet flora has gradually been replaced by modern xeric Mediterranean flora.

The property is representative of the many superlative features and ecological processes in the Xinjiang Tianshan. The property includes spectacular landscapes from red bed canyons to the highest peaks and largest glaciers in the entire range, to highly scenic and ecologically rich alpine meadows, to areas of rivers, lakes and wetlands. The property captures the full range of altitudinal zones of a temperate arid zone and the evolutionary processes of the Pamir-Tian Shan highlands.

The area benefits from a very low degree of threat. There are no permanent inhabitants in the property. Extractive industries and infrastructure development is limited in the region and does not exist within the property. There is no record of invasive species. The entire property is legally protected and all of the components have buffer zones.

The components of the property range from IUCN Categories I-IV, though several of the units, including the largest component (Tomur) are managed as Category Ia. The property has been under conservation management for some time. The Tomur Peak National Nature Reserve in particular has been under conservation management since 1985. A broad range of environmental and natural resource use laws governs and the property therefore benefits from a high level of legal protection.

Special attention needs to be given to ensuring effective management planning and coordination across the components of the property which are geographically well separated from each other. Future efforts should focus upon opportunities to extend or add to the property to increase its size and integrity given the overall very large scale of the Tianshan Mountain Range system. This should also consider initiatives with neighbouring countries to consider transnational opportunities to extend protection of the Tianshan system.

Attention should also be given to working with IUCN and other partners to better understand the implications of grazing on the natural ecosystems of Tianshan and to explore the potential of integrating local communities and in particular traditional herdsmen into the management of the property.