The 714,566 hectare site comprises two distinct parts: the dormant volcanic Pinacate Shield of black and red lava flows and desert pavements to the east, and, in the west, the Gran Altar Desert with its ever changing and varied sand dunes that can reach a height of 200 metres. This landscape of dramatic contrast notably features linear, star and dome dunes as well as several arid granite massifs, some as high as 650 metres. The dunes emerge like islands from the sea of sand and harbour distinct and highly diverse plant and wildlife communities, including endemic freshwater fish species and the endemic Sonoran Pronghorn, which is only to be found in northwestern Sonora and in southwestern Arizona (USA). Ten enormous, deep and almost perfectly circular craters, believed to have been formed by a combination of eruptions and collapses, also contribute to the dramatic beauty of the site whose exceptional combination of features are of great scientific interest. The site is also a UNESCO Biosphere Reserve. 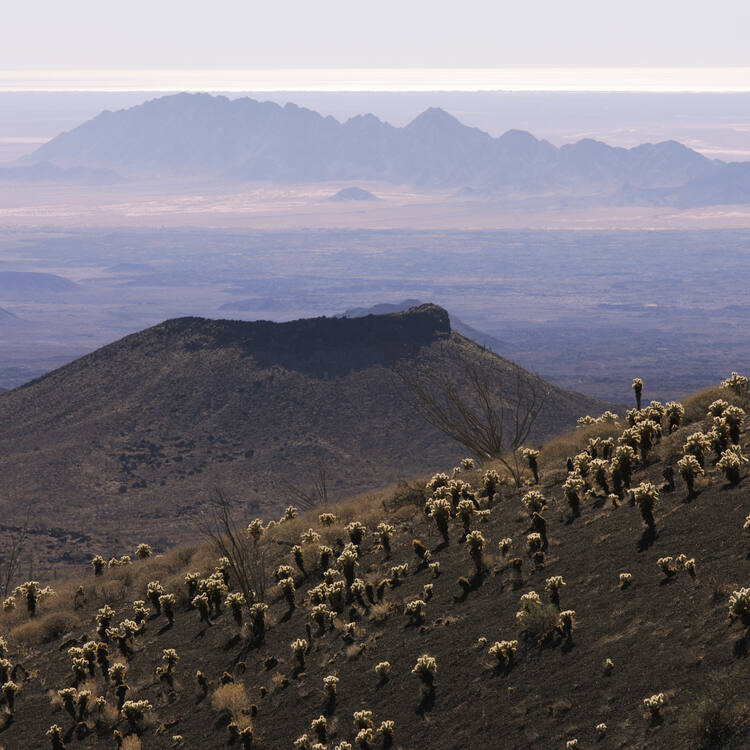 El Pinacate and Gran Desierto de Altar Biosphere Reserve (EPGDABR) is located in the Sonoran Desert. The Sonoran Desert is one of four great North American deserts along with the Chihuahuan Desert, the Great Basin Desert and the Mojave Desert. EPGDABR has a surface of 714,566 hectares with 354,871 hectares of buffer zone. It is a large and relatively undisturbed protected area which comprises two very distinct broad landscape types. To the East, there is a dormant volcanic area of around 200,000 ha, comprised of the Pinacate Shield with extensive black and red lava flows and desert pavement. The volcanic shield boasts a wide array of volcanic phenomena and geological formations, including a small shield-type volcano. The most visually striking feature is the concentration of a total of 10 enormous, deep and almost perfectly circular Maar (steam blast) craters.

In the West towards the Colorado River Delta and South towards the Gulf of California, is the Gran Altar Desert, North America's largest field of active sand dunes and only active Erg dunes. The dunes can reach 200 meters in height and contain a variety of dunes types. The dunes originate from sediments from the nearby Colorado Delta and local sources. In addition, there are several arid granite massifs emerging like islands from the sandy desert flats, ranging between 300 and 650 m.a.s.l., which represent another remarkable landscape feature harbouring distinct plant and wildlife communities.

The variety of landscapes results in extraordinary habitat diversity. The diversity of life forms across many different taxa is notable with many species endemic to the Sonoran Desert or more locally restricted to parts of the property. All feature sophisticated physiological and behavioural adaptations to the extreme environmental conditions. The subtropical desert ecosystem reportedly hosts more than 540 species of vascular plants, 44 mammals, more than 200 birds, over 40 reptiles, as well as several amphibians and even two endemic species of freshwater fish.

Criterion (vii): The property presents a dramatic combination of desert landforms, comprising both volcanic and dune systems as dominant features. The volcanic shield in the property boasts a wide array of volcanic phenomena and geological formations, including a small shield-type volcano. The most visually striking feature is the concentration of a total of 10 enormous, deep and almost perfectly circular Maar (steam blast) craters, believed to originate from a combination of eruptions and collapses. The property is visually outstanding through the stark contrast of a dark-coloured area comprised of a volcanic shield and spectacular craters and lava flows within an immense sea of dunes. The dunes can reach 200 meters in height and contain linear dunes, star dunes and dome dunes, displaying enormous and constantly changing contrasts in terms of form and color. In addition to these predominant features there are several arid granite massifs emerging like islands from the sandy desert flats, ranging between 300 and 650m high. The combination of all these features results in a highly diverse and visually stunning desert landscape.

Criterion (viii): The property’s desert and volcanic landforms provide an exceptional combination of features of great scientific interest. The vast sea of sand dunes that surrounds the volcanic shield is considered the largest and most active dune system in North America. It includes a diverse range of dunes that are nearly undisturbed, and include spectacular and very large star-shaped dunes that occur both singly and in long ridges up to 48km in length. The volcanic exposures provide important complementary geological values, and the desert environment assures a dramatic display of a series of impressive large craters and more than 400 cinder cones, lava flows, and lava tubes. Taken together the combination of earth science features is an impressive laboratory for geological and geomorphological studies.

Criterion (x): The highly diverse mosaic of habitats is home to complex communities and surprisingly high species diversity across many taxonomic groups of flora and fauna. More than 540 species of vascular plants, 44 mammals, more than 200 birds and over 40 reptiles inhabit the seemingly inhospitable desert. Insect diversity is high despite not being fully documented. Several endemic species of plants and animals exist, including two freshwater fish species. One local endemic plant is restricted to a small part of the volcanic shield within the area. Large maternity caves of the migratory Lesser Long-Nosed Bat, which is an important pollinator and seed dispersal vector are found within the property. Noteworthy species include the Sonoran Pronghorn, an endemic subspecies restricted to the South-western Arizona and North-western Sonora and threatened by extinction.

El Pinacate and Gran Desierto de Altar Biosphere Reserve is relatively undisturbed and has an outstandingly high level of physical integrity to a greater extent related to its harsh environment. Whilst there are a limited number of private land ownership (Ejidos) areas, the entire property is under the authority of the Federal Agency for Protected Areas (CONANP).

Special attention should be given to avoid the indirect impacts of nearby tourism development including from increased traffic, which creates ecological disturbance, littering and wildlife road kills. More importantly, tourism can create pressure to extend existing road infrastructure which could facilitate entry points for alien invasive species. Increasing impact from off-road vehicles has been observed, requiring monitoring and effective law enforcement in EPGDABR. However the most critical long term management issue is to address potential problems derived from tourism-related water consumption.

Long term protection and management of the property also includes the need to minimize and/or mitigate impacts derived from existing or proposed roads; to ensure effective implementation of measures to avoid further depletion of scarce water resources; to maintain and enhance ecological connectivity so as to buffer against climate change impacts and to effectively control and eradicate alien invasive species. Transboundary cooperation to maintain and enhance the management of the property is essential and therefore the formal establishment of a Transboundary Protected Area with adjoining protected areas in the United States is highly recommended.