The Invention of "World Heritage"

AFUS, the Association of Former Unesco Staff Members, takes pleasure in presenting this second Paper published by its History Club. As you may recall, the Club is the offspring of a commonplace observation, namely, that former staff members are the custodians of a body of experience that should not be allowed to disappear. Moreover, first-hand material is preserved for historians who may want to study the adventures of international cooperation in the second half of the 20th century.

Memory and history are not the same thing. The former provides the background for the latter. Retired staff are singularly qualified to gather reminiscences, bring to light small or large ‘secrets’ known only to them or hidden in obscure archives or unwritten sources. Moreover they have an advantage over outside observers: they know the ‘code’, can read between the lines of the strange literature known as ‘reports’, cut through the maze of cant, interpret euphemisms, understatements and allusions.

The present volume – the second in this series – is striking proof of all this. The two authors wrote ‘in parallel’ and achieved the rare feat of making indifferent, often dull material, interesting, even exciting. This is thanks to their manner of telling the story, showing how one thing led to another, how diversions lay constantly in wait, leaving the reader uncertain of the final outcome, until, in the end, the fascinating concept of cultural and natural world heritage was ‘invented’.

Why the term ‘invention’? For the antique orator, invention was the discovery and striking presentation of something new; for the explorer, it is the discovery of unknown land; for the musician, a new composition; for the archaeologist, the bringing to daylight of a buried treasure; for the scientist, the discovery of a hidden law; for the philosopher, the formulation of a new concept; for the writer and artist, the creation of a new form. For our authors, ‘invention’ is all that, as the reader will appreciate as he becomes immersed in the text. The persons who managed to work out this Convention and to give it a name were indeed discoverers. They based themselves on partially known concepts, which until then had been used only in a limited, restrictive and partial manner, but not in a worldwide and audacious approach. This justifies the title of the Paper.

Seen in this perspective, the administrative procedures, the diplomatic negotiations, the endless painstaking procedural discussions lose their soulless character and assume dramatic proportions; they prove that questions of form always determine the world of ideas and the play of power.

From the first lines onward it is obvious that the human factor is decisive in the life of a project. Sometimes this is due to a sudden intuition, the accidental appearance of a new idea, the realization of its significance and general implication. The Paper shows that, on several occasions, willpower, steadfastness and sometimes the adroitness of a few could transform a fluctuating situation into a workable reality. In fact, the sensitivity, initiative and courage of a few can change a personal design into a collective achievement.

These accounts are all the more precious because the relevant documentation, as pointed out by the authors, is fragmented or incomplete, the archives deficient for various reasons, both due to adverse circumstances and the deplorable carelessness of man. This Paper saves from oblivion a chapter of history that is significant not only intrinsically, but also because of its present relevance. It vindicates the existence of the History Club and encourages it to pursue its efforts.

Ideas and opinions expressed in these Papers are those of the authors and do not necessarily reflect those of the Association of Former Unesco Staff Members, nor those of Unesco. 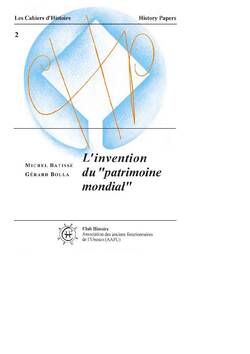 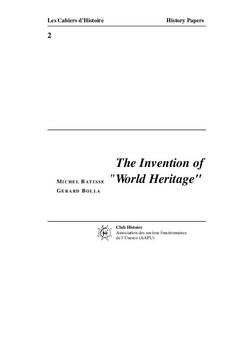