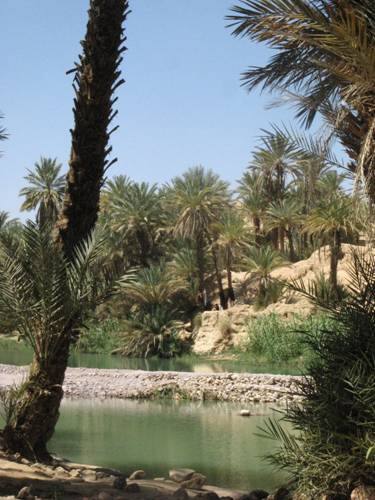 Preparatory assistance for the inscription of the Southern Oasis of Morocco

At the initiative of the Permanent Delegation of Morocco and the “Agence pour la promotion et le développement économique culturel et social des provinces du Sud du Royaume du Maroc” (agency for the economic, cultural and social promotion and development of the southern provinces of the Kingdom of Morocco), UNESCO’s World Heritage Centre was invited to take part in a field mission in the Southern Oasis region. The mission provided technical assistance for evaluation and guidance on the possibility of inscribing a series of oases, or Ksour, on the World Heritage List, possibly as cultural landscape, and to create an ecological and cultural tourism strategy.

This mission was expected to identify potential projects to contribute to the enhancement, and cultural and tourism development, of the oases of southern Morocco. More particularly, conducting an assessment of heritage values and resources to help determine the potential for developing a nomination proposal on the World Heritage List and conducting a diagnosis of the tourism development plan based on field observations and meetings with Moroccan experts and local authorities.

This mission demonstrated the importance attributed to the safeguarding and enhancement of the rich cultural heritage of the southern oases by Moroccan officials and authorities. The joint mission between the Grahal Company and UNESCO was co-funded by the Agence du Sud and the France-UNESCO Cooperation Agreement, which also contributed to identify the experts.

The rich heritage of the douar (Icht, Igred, Ou Zrou, Agadir Ouzrou, Akka municipality) is interesting if one considers both the urban typology (inextricably linked to palm groves and to the theme of water and its collective management), the landscape diversity, as well as the density of built vernacular heritage (adobe domestic architecture). The two historic minarets of Akka testify to the architectural quality of the monumental heritage. Several rock-carving sites (Foum Al Hisn or Akka territories), portraying antelopes, elephants and bovids, provide evidence of the transition from a society of hunters to a pastoral culture by 3,000 BC. The collective barns, associated with the theme of food and its collective management, carry heritage value. They both testify to the ways people adapted to an isolated environment and also have sacred value.

Intangible heritage linked to the nomadic culture is also present. It is recognised especially through the inscription in 2008 of the Tan Tan Moussem on the Representative List of the Intangible Cultural Heritage of Humanity (2003 Convention). The mission underlined how stakeholders were supportive of the initiative as well as the dynamism of the institutional, or community, network behind the Agence du Sud, the project leader.

Apart from the international recognition of heritage, this nomination initiative is part of a wider strategy for local development which is handled in all its economic, social and cultural aspects by the programme for safeguarding and development of the southern oases of the kingdom. (« Programme de Sauvegarde et de Développement des Oasis du Sud du Royaume »).