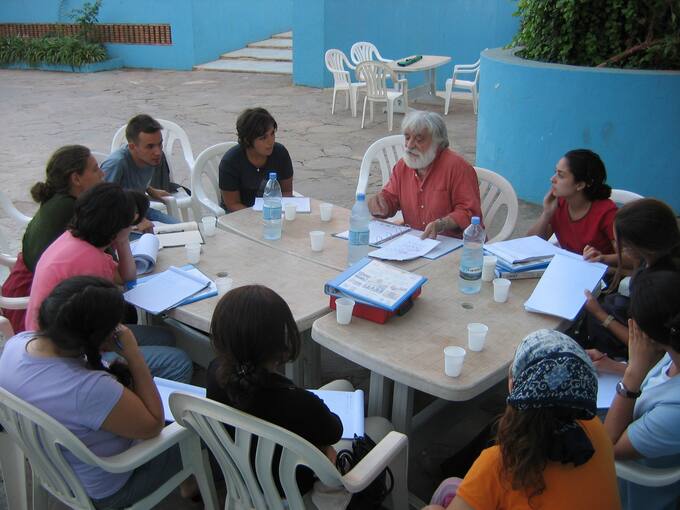 Workshop for heritage in Tlemcen, Algeria

This project aimed to ensure the training of local skilled staff in restoration and rehabilitation, through organization of education programmes in partnership with the “Friends of Tlemcen” NGO.

Tlemcen, Algeria, was the political capital of Central Maghreb under the reign of the Zianides, despite a very turbulent history which saw two sieges and two periods of occupation in the 14th century. This prosperous period spans across three centuries, from 1235 to 1555. Princes, arts benefactors and enlightened patrons of the arts attracted scientists, intellectuals and artists to the city. In the second half of the 14th century the Medersa Yakoubia was built. This site comprised, among others, the Sidi Braham mosque, built by Sultan Abou Hammoumoussa Tani in 1364.

In 1993, two central pillars of the prayer hall collapsed and knocked down a third, leading to a partial collapse of the roof. In 2001, UNESCO’s (then) Cultural Heritage Department dispatched an inspector general of historic monuments of the French Ministry of Culture, under the framework of the France-UNESCO Cooperation Agreement, to provide technical support for the restoration of the Tlemcen monuments.

The 2001 expert mission exposed the alarming state of deterioration. The site required urgent, organized intervention. Further intervention was required to reinforce previous interventions and ensure better conservation techniques. Efforts were subsequently reinforced and a better quality of conservation interventions required which was addressed through training and improving the technical skills of on-site workers.

The workshop allowed local capacity building and was implemented through a series of workshops in Tlemcen.