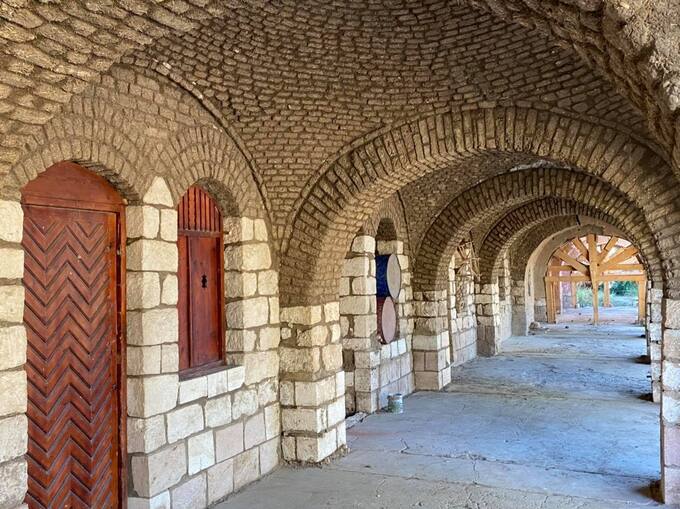 New Gourna Village is located in Luxor on the West Bank of the Nile River, within the World Heritage property of Ancient Thebes in Egypt. The Village was designed and built between 1946 and 1952 by the famous Egyptian architect Hassan Fathy (1900-1989).

It was created to shelter the community of Old Gourna (Gournii ) who had lived above the tombs in the ancient cemetery of Thebes and whose relocation was considered as a solution to reduce the damages to the Pharaonic Tombs. The main characteristics of New Gourna Village consist of its reinterpretation of a traditional urban and architectural setting, its appropriate use of local materials and techniques, as well as its extraordinary sensitivity to climatic problems. It demonstrated, within the era of "modern movement" that sustainability and social cohesion could also be met with vernacular architectures, local materials and techniques. For this reason, it is an outstanding example of sustainable human settlement and appropriate use of technology in architecture and planning. Exposed in one of the major architecture and planning references, Architecture for the Poor: An Experiment in Rural Egypt by Hassan Fathy, published in 1976, these ideas inspired a new generation of architects and planners worldwide through an integration of vernacular technology with modern architectural principles.

Although New Gourna is situated inside the boundary of the World Heritage Property of Ancient Thebes with its Necropolis (inscribed in 1979 on the World Heritage List), its outstanding value was not considered in the nomination dossier at the moment of its preparation.

Following concerns on the serious state of degradation of the village, by both the World Heritage Committee and the academic world of experts on Hassan Fathy's architectural work who submitted an international petition, UNESCO initiated a project in 2009 for the safeguarding of this important site. This was agreed to in consultation with the Ministry of Culture of Egypt and the Governorate of Luxor.

After several preparatory missions and consultations with international expert organizations, first project activities were launched, consisting of documentation and the physical and the socio-economical surveys, in cooperation with the World Monuments Fund. A Scientific Committee composed of experts in the field of sustainable and earthen architecture was formed to guarantee the satisfactory launch of activities.

One of the fundamental goals of the proposed UNESCO initiative is to valorise the pioneering ideas and philosophy of Hassan Fathy's work and to reinforce its relevance to contemporary sustainability concerns. Fathy's tenets derived from humanistic values about the connections between people and places and the use of traditional knowledge and materials especially the exceptional advantages of earth as full-fledged construction material. New Gourna was a critical experiment in the implementation of that philosophy. Thus, the safeguarding of New Gourna is about more than just preserving its original design and fabric but also about promotion, communication and education.

The initiative also focuses on restoration and management concerns. The alteration and destruction of original structures and features are ongoing. The degraded state of conservation of New Gourna becomes evident through the destruction and collapse of major buildings due to lack of maintenance. Urgent restoration measures are needed to stop irreversible changes and loss. The number of original mud brick houses in Hassan Fathy's Gourna is considerably reduced. The few public buildings such as the Khan and the market are collapsing and the remaining open spaces are more and more encroached. The lack of infrastructure and maintenance of public facilities thus constitutes an important threat to the village as well as the ongoing very intense construction activity with reinforced concrete pillars in inconsistent out-of-scale buildings.

The many reasons behind this UNESCO initiative are:

The long-term results may be summarized as follows:

Finally, UNESCO encourages interested Institutions and potential partners to contribute to the achievements of this Initiative, which will not only serve for the promotions of ideas of sustainable architecture but also help recognize the fundamental role of communities.