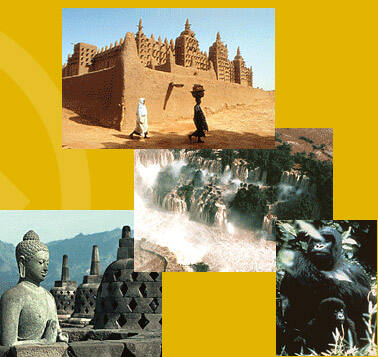 People of Africa, the Americas, the Arab to the future world, Asia, Europe and the Pacific; men, women and children, we are all the inheritors of treasures from past civilizations and natural sites of outstanding beauty. We are all responsible for passing these treasures on civilizations. People of the world, ephemeral owners of the world heritage of humanity, ours is the task of passing on this heritage.

At the United Nations Conference on the Human Environment, held in 1972 in Stockholm, States recognized the need to protect the cultural and natural heritage, since “(…) deterioration or disappearance of any part of the cultural or natural heritage constitutes a harmful impoverishment of the heritage of all the nations of the world”. On 16 November of that same year, the UNESCO General Conference adopted the Convention concerning the Protection of the World Cultural and Natural Heritage.
The impetus was provided by a call to save Abu Simbel (Egypt), Venice (Italy), Moenjodaro (Pakistan) and Borobodur (Indonesia). Without international solidarity, those sites would have disappeared forever.

Hence the idea of sharing among all countries, the responsibility for safeguarding the greatest cultural and natural sites on Earth.

One of the primary duties of States Parties to the World Heritage Convention is to identify sites on their territory to be preserved and thus transmitted to future generations.

Once included on the World Heritage List, these sites, without prejudice to national sovereignty and property rights, are placed under the protection of the international community.

The inscription of sites in the World Heritage List enables each State Party to obtain the cooperation of the international community, to inform its population of the outstanding value of a site and, thus, to help preserve its national heritage.

How are sites included in the World Heritage List?

Each State Party first of all draws up a tentative list – an inventory of cultural and natural heritage that might be nominated in the future. The request for inscription must come from the State on whose territory the property is situated; it should include a detailed management and protection plan for the site. It is the World Heritage Committee, made up of 21 States Parties, which makes decisions about inscriptions. Once a year, it examines nominations on the basis of technical evaluations.
Three advisory bodies assist the Committee in this endeavour: the International Council on Monuments and Sites (ICOMOS), the World Conservation Union (IUCN) and the International Centre for the Study of the Preservation and Restoration of Cultural Property (ICCROM). Once selected, the site is included on the World Heritage List.

Two main types of sites can be included in the World Heritage List: creative works of humankind and those of natural origin.
The cultural heritage includes monuments, groups of buildings and outstanding cultural landscapes with historic, artistic, scientific, ethnological or anthropological qualities. The Island of Gorée in Senegal, the City of Quito in Ecuador, Palmyra in the Syrian Arab Republic and Burgos Cathedral in Spain are among them.
Their authenticity is taken into consideration as much as their management and protection.

The natural heritage is made up of sites that are valued for their testimony to life on Earth, geological, biological or ecological phenomena, their outstanding beauty, scientific value or the rarity of the species living there. These include the Vallée de Mai in the Seychelles, Yosemite National Park in the United States, the volcanoes of Kamchatka in the Russian Federation and the Ngorongoro crater in the United Republic of Tanzania.

The protection, management and integrity of the properties play an essential role in their preservation. There are also mixed sites, of both cultural and natural value, such as Tassili n’Ajjer in Algeria, Mount Athos in Greece and Tongariro National Park in New Zealand.

Ecosystems, wilderness areas, fossil sites, parks, reserves, volcanoes, landscapes, rivers, bays, mountains, deserts… each of these unique areas possesses outstanding resources which must be protected over time in order to maintain biological diversity. From archaeological ruins, monuments and architectural groups to historic centres, rural and industrial sites – everywhere, and in every field, the human genius is present.

It is precisely because of their diversity that each of the sites included in the World Heritage List must be treated in a unique way.

In 1994, the World Heritage Committee adopted a Global Strategy to reach a harmonious balance between the different kinds of sites included in the List. It aims to inscribe sites that reflect the fascinating cultural and natural diversity of our planet.
Shared heritage, joint responsibility

War, pollution, poaching, unauthorized building, roads and motorways, earthquakes, floods and other natural disasters… the threat of destruction or damage is ever present.

Among the over 700 sites on the List, more than 30 are on the List of World Heritage in Danger. All of these sites benefit from emergency measures.
A tornado damaged the Royal Palaces of Abomey in Benin — they are now being restored. The cloisters, palaces and roofs of Dubrovnik in Croatia had resisted earthquakes — but were damaged by war.

Once listed as endangered monuments, they were repaired. The Wieliczka Salt Mine in Poland, which was threatened by damp conditions, has been taken off the In Danger List thanks to international cooperation.
Anyone (individuals, governmental or non-governmental organizations, associations) can alert the World Heritage Committee to the dangers threatening a World Heritage site.

Article 5 of the Convention: the key to preservation

UNESCO’s mission throughout the world is essentially the fulfilment of a commitment. Its aim is to aid, advise, assist in emergencies if necessary, support and accompany the States Parties to the 1972 Convention.
In this regard, Article 5 of the Convention is particularly important. It calls upon each State Party to ensure the protection and presentation of the cultural and natural sites on its territory.

Each State undertakes to adopt legal, scientific, technical, administrative and financial measures. Suitable legislation, officials and professionals aware of the need for conservation, and appropriate scientific and technical studies are all essential for the task of safeguarding the heritage of humanity.

The challenges of the twenty-first century

The best guarantee of the preservation of World Heritage treasures is the attention and respect that each of us, as individuals, can bring to them. Tourists, in particular, must be aware of the significance of their attitudes and actions. That is the starting point for the development of the concept of sustainable tourism, which facilitates preservation by involving local communities. UNESCO invites States to cultivate a national determination to safeguard in the interest of the international community.
This commitment generates a considerable amount of assistance. There are also specific preservation plans, for instance, since 1994 a special project for historic cities and towns has aimed to ensure that the memory of urban areas does not disappear as modernity advances.

The collective concern to preserve outstanding properties should also concur with the interest of private capital, when the inclusion of a site in the World Heritage List involves the entire human community.

By pooling all our efforts, we shall achieve our shared purpose: to hand down to future generations the treasures inherited from the past.