State of Conservation Group of Monuments at ... 2019
Print

The State Party did not submit the state of conservation report in 2018, which was requested by the Committee in Decision 41 COM 7B.90 (Krakow, 2017). The Committee’s request referred in particular to the road widening in the Kamalapur tank area, an activity that may negatively impact the Outstanding Universal Value (OUV) of the property.

Based on information received from a third party, the World Heritage Centre sent a letter to the State Party on 11 February 2019, requesting information on an alleged case of vandalism at the property. The State Party sent a response on 29 March 2019, which is available at http://whc.unesco.org/en/list/241/documents. This response comprises a short statement on the state of conservation of the property.

The vandalism, recorded on social media, involved pulling down a pillar of a mandapa within the Vishnu temple, which is part of the World Heritage property. The State Party indicated that officials from the Archaeological Survey of India (ASI) promptly filed a complaint with local police against unknown persons and that, following an inspection of the vandalised structure, the police investigation led to the arrest of three suspects within a week. A Court order issued that the fallen pillar be restored to its original position in the presence of relevant officers of the ASI, and the fallen pillar was therefore re-erected in its original position. The responsible staff at the ASI (Hampi Mini Circle, Kamalapur Sub Circle) assured the World Heritage Centre in writing that such incidents would not occur again in the future.

Additionally, the State Party reported collaboration between the Hampi World Heritage Area Management Authority and ASI since 2016 to draft and implement the Integrated Management Plan of the property, and to draft the Master Plan of the entire Hampi site (29 villages, of which 4 are within the boundaries of the World Heritage property). Consequently, ASI is now responsible for just 57 of the sites within the property and acts as a nodal agency on matters of development while the state department of archaeology is responsible for 1,600 sites over 41.8 km2.

The State Party provided a report on the main conservation works undertaken during the financial years 2017-2019 (Annex 7) and described improvements to public amenities and the upgrade of tourist visitor amenities throughout the property (Annex 8).

The progress achieved by the State Party, as identified in the above-mentioned reply letter, is welcomed, especially with regard to the immediate investigation and the court order aiming to implement corrective measures in order to revert the act of vandalism at the Vishnu temple.

The joint collaboration between the Hampi World Heritage Area Management Authority and ASI on the Integrated Management Plan for the property and the Master Plan of the entire Hampi site has clarified areas of responsibility and is also welcomed.

However, the State Party did not provide any information on the issue of road widening in the Kamalapur tank area. The issue, therefore, remains a source of concern, as the Committee considered that it might have a negative impact on the OUV of the property in its Decision 41 COM 7B.90. It is therefore recommended that the Committee request the State Party to provide information in that regard as a matter of urgency, for review by the Advisory Bodies, in accordance with Paragraph 172 of the Operational Guidelines. 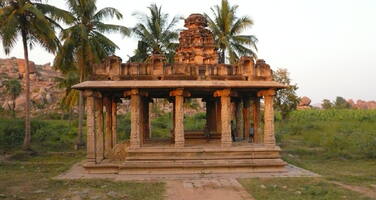