State of Conservation Historical Centre of the ... 2016
Print

On 23 December 2015, the State Party submitted a report on the state of conservation of the property, available at https://whc.unesco.org/en/list/1170/documents/. It provides information on the following:

While the State Party has made some improvements with regard to the strengthened legislation and steps are being taken to develop the Management Plan, insufficient regulations and the lack of a comprehensive management system remain of concern. It is not apparent to what extent the revised regulations on urban development and infrastructure relate to the OUV of the property and how these regulations are implemented in the absence of an appropriate Management Plan.

Despite the repeated requests by the Committee, detailed information on the development and construction projects within the property and its buffer zone, or HIA of existing development proposal have not been provided by the State Party. In December 2014, information was received by the World Heritage Centre and ICOMOS from the civil society concerning a number of construction and infrastructure development projects within the property and its buffer zone. In terms of scale, height and mass, these future projects, specifically in the vicinity of the river Kotorosl, pose a threat to the OUV of the property inscribed for its importance in architecture, town planning and spatial relationships between buildings. It further confirms the concerns expressed by the Committee at its 38th session (Doha, 2014) and, the findings of the 2012 Reactive Monitoring and 2014 ICOMOS Advisory missions. On 19 December 2014, information received was transmitted to the State Party for comments in conformity with paragraph 174 of the Operational Guidelines. Therefore, it is recommended that the Committee reiterate its request to the State Party to further elaborate, regulations and rules considering the OUV of the property.

Restrictions on land use and developments within the property and strict limits to development rights should be included, and should apply to development and building projects which were already approved within the existing Urban Master Plan. In this sense, the ICOMOS Advisory mission to Yaroslavl in October 2014 provided essential guidance for the development of the Management Plan and highlighted the need to revise the Urban Master Plan in order to effectively preserve the World Heritage property and its buffer zone, through, among others, specific legislation on historic monuments, architectural and urban morphology regulations.

Conservation measures and archaeological research are carried out according to the current management system and the prevailing policy. However, there is current regulation which permits the reconstruction of ruinous monuments. Therefore, the State Party should refrain from reconstructing any monuments until a conservation strategy, in parallel with the Management Pan, is developed to guide conservation measures and ensure an approach and methodology that is appropriate to the World Heritage status of the property.

Historic Centre of the City of Yaroslavl (Russian Federation) (C 1170) 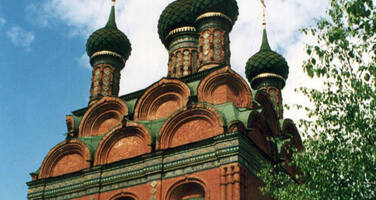