The State Party submitted a report on the state of conservation of the property on 18 March 2016, which is available at https://whc.unesco.org/en/list/1397/documents/. It reports on progress made to address the concerns raised by the Committee at the property as follows:

The strong commitment of the State Party to revise the Meydan-e Atiq project, taking into consideration the structural, safety and design issues raised by the Committee, should be noted. According to the State Party’s report, no structural connection is foreseen between the new galleries and the historic walls of the mosque. The concerns of the 2014 ICOMOS Advisory mission have also been taken into account with regard to the revision of the north and north-western side of the Meydan-e Atiq square, and it is recommended that the Committee welcome the progress made with the revision of this project.

However, the State Party has not dealt with the issue of the relation between the Masjed-e Jame and its traditional setting, nor how new buildings or projects within the buffer zone could irreversibly alter the character of the property’s traditional historic setting. When carrying out its assessments, ICHHTO is strongly encouraged to thoroughly consider the suitability of new projects, especially with regard to their correlation to the property’s historic settings, in keeping with the ICOMOS’s various international charters and recommendations. It is therefore recommended that the Committee request the State Party to report on any project that could have an impact on the OUV of the property, in accordance with Paragraph 172 of the Operational Guidelines.

The 2014 Advisory mission also highlighted the need for further archaeological excavations and expressed concerns about the potential impacts of vibrations from the underground road section in the immediate vicinity of the property. The mission further recommended that the potential atmosphere and noise pollution, as well as the impact of vibrations on the static behaviour of the Mashed-e Jame structures be monitored regularly. These questions have not been addressed in the State Party’s report and it is recommended that the Committee highlight the need for the State Party to address these questions, notably in the framework of the upcoming Management Plan.

At the 38th session of the Committee (Doha, 2014), it was reported that the property’s buffer zone has been integrated into the Isfahan Master Plan, and in view of this, the Committee requested the State Party to develop, as a matter of urgency, an Integrated Conservation and Management Plan (ICMP) to manage the urban development plan as well as the revitalization plan for the historic axis of Isfahan. The State Party indicates that the development of this ICMP is still in progress, although encouraging progress has been reported with the identification of the factors impacting the OUV. It is therefore recommended that the Committee reiterate its request that the State Party proceed with the finalization and adoption of the ICMP, and to submit it to the World Heritage Centre for review by the Advisory Bodies. 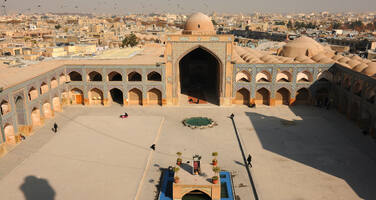