On 3 February 2015, the State Party submitted a state of conservation report, which is available at https://whc.unesco.org/en/list/1093/documents. The report addresses Decision 37 COM7B.51 of the World Heritage Committee, as follows:

The information provided by the State Party in its report and appendices, is well noted, as well as the considerable progress made to address the conservation and management of the property.  Results of the physical condition assessment of all the components of the property, expected in June 2013, have not been provided in the State Party’s report, but the Kastrum Plan may be intended to replace that survey. However, several issues have not been fully addressed.

Stylite Tower: The geotechnical, geophysical and geo-structural investigation is detailed and sets out the methodologies and results clearly, although it would have been useful to include the results of on-site monitoring in the analysis.  The 2014 report sets down four options for stabilising and repairing the Tower, all of which involve some level of excavation around the Tower’s base for new reinforced concrete foundations, micropiles and some form of steel brace.  One option also involves the dismantling of the Tower before construction of an internal steel brace.  The report suggests that the excavations for new foundations may be combined with archaeological research; but makes no mention of archaeological survey of the structure before any works. It is recommended that this structural investigation be considered in relation to a wider analysis of archaeological, historical and other dimensions before any interventions are planned. The dismantling of the tower is not considered as an option and it is suggested that further dialogue on conservation options before work is planned.

Management Plan: The Management Plan appears to still be ‘work-in-progress’; the draft index is very short and it is not clear from the documentation when the Plan may be finalized.  The appendix ‘A basis towards a public use plan’ is a welcome addition to the site’s documentation and summarises many key issues, with a set of short, medium and longer-term priorities which should be integrated into the Management Plan.  But there is no mention of a conservation plan and the archaeological research policy as set out focuses on protection of the mosaics by temporary reburial and on the documentation and systematic mapping of the main structures of the St Stephan complex.  Whilst these are important elements, it might be useful to consider a wider context, so that, for example, the archaeological implications of the remedial work at the Stylite Tower can be included.

The Management Plan must be a priority. It would provide a clear framework and vision for the future, and assist in the conservation of the site as a whole and the safeguarding of its Outstanding Universal Value. 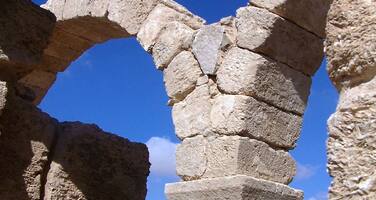