New information: At its last session in Morocco (November – December 1999) the Committee had expressed its agreement with the State Party‘s proposal that the effects of the inclusion of Sangay in the List of World Heritage in Danger should be evaluated. In accordance with that recommendation, the Centre and IUCN intend to invite a paper from the Ecuadorean authorities for presentation at a workshop on the “Role of the World Heritage in Danger List in promoting international co-operation for the conservation of World Heritage sites”. This workshop is due to be convened at the time of IUCN‘s World Conservation Congress, from 3 to 10 October 2000, in Amman, Jordan. Several other States Parties that have the experience in using the List of World Heritage in Danger as an instrument for international co-operation will also be invited to submit presentations at the workshop.

IUCN has reviewed the state of conservation report submitted by the State Party as attachment to a letter dated 27 July 2000 to the Centre. This report addresses the efforts of the State Party in trying to enhance conservation of this site despite the difficult economic situation of the country. The conclusions of the report point to the fact that as accessibility to the site has improved due to the Guamote-Macas road, threats to the integrity of the Park are also rising. Pressures arising from the intention of local people to move into the Park following the eruption of the Tungurahua Volcano are also a major concern.This report from the State Party re-inforces the findings of the IUCN mission to this site in July 1999. IUCN has commended the State Party’s efforts to strengthen conservation of this site and recommended that the site should be retained in the List of World Heritage in Danger. The Minister for Environment for Ecuador is due to make a presentation on the case of Sangay National Park at the Centre/IUCN workshop on the "Role of World Heritage in Danger Listing in Promoting International Co-operation for the Conservation of World Natural Heritage", in Amman, Jordan, during 6-7 October 2000. At that workshop Centre and IUCN staff will discuss with the Ecuadorean authorities the elaboration of a plan, including the description of indicators and benchmarks, for the continuous monitoring of the state of conservation of Sangay and for the eventual removal of the site from the List of World Heritage in Danger.

The Bureau was informed of a meeting involving Centre staff and the Minister for the Environment of Ecuador, and which took place in UNESCO, on 22 May 2000. The Minister informed the Centre that the Guamote-Macas road is now completed and his Government will explore the actions required to minimise impacts of this road. The Bureau concurred with the view of IUCN that the mitigation of impacts of the Guamote Macas Road and the effective implementation of the new management plan for the site are the priorities for improving the state of conservation of this site.  The Representative of IUCN noted that the case of the Sangay National Park illustrated the usefulness of inscription on the List of World Heritage in Danger.

The Committee may wish to review new information that may be available at the time of its session and take necessary decisions and recommend appropriate actions for the consideration of the State Party, advisory bodies and the Centre 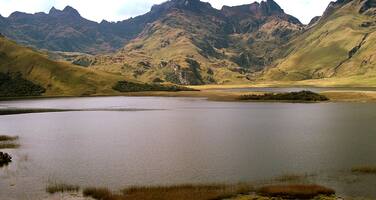