Summary of previous deliberations: The Committee examined the state of conservation at its sessions in 1996, 1997 and 1998. It particularly stressed the need for adequate management arrangements and comprehensive master planning. The Committee at its twenty-second session:

New information: No information or documentation had been received from the Peruvian authorities at the time of preparation of this working document.

However, the Secretariat has received a great number of communications and appeals in which individuals, scientists and non-governmental organizations express concerns and opposition to the plans for the cable car system, stating that its impact would seriously affect the natural and cultural values, and could increase the level of tourists to unacceptable levels.

IUCN transmitted a report to the Secretariat that is summarised below:

Recent reports indicate that the situation in the Park continues to be of concern. There are increasing problems with the collection and disposal of garbage and waste water (a workshop to discuss possible solutions took place in the second week of April but there is little indication on how far recommendations from this meeting will be implemented). The same is valid in relation to the Master Plan for this site. The Master Plan was officially approved in October 1998; but until now it has not been published or distributed and no action is being taken to put it into practice. The proposed Management Committee has not been nominated. No actions have been taken to follow the recommendations from the Master Plan.

The construction of a cable car continues to be an issue of major concern. An EIA was conducted by the international consultant firm, Dames & Moore, but INRENA (National Institute for Natural Resources) has still a number of technical questions and the tourism sector passed the EIA document on to the Ministry of Transportation and Communications, without any opinion. Both INRENA and INC (National Institute for Culture) must previously accept the EIA, prior to the approval by the Ministry of Tourism and the Ministry of Transport. A key point of disagreement of INRENA in relation to the EIA is the lack of an analysis of different alternatives. Despite this disagreement on the EIA for the cable car project, the Government has already approved a license to privatise 7000 square meters to build up the cable car. This decision is generating additional conflicts at the local level because the local government was not consulted on this decision.

In addition, information has been received on a proposal to construct a new road between Cusco and Machu Pichu. It is important to note that the Master Plan approved by the Government clearly recommends that new access to this site is not necessary and it could create additional pressures from an increasing number of visitors.

As to the Master Plan, IUCN provided the following comments:

The approval of the Master Plan for the Historic Sanctuary of Machu Pichu is a positive step towards enhancing its protection and management. IUCN welcomes this action and encourages the State Party to proceed with the implementation of the Plan. However, IUCN would like for the State Party and the World Heritage Bureau and Committee to consider the following comments:

ICOMOS will present its observations on the Master Plan during the session of the Bureau.

On 12 May 1999, the Permanent Delegation of Peru to UNESCO requested a visit during June of the presidents of IUCN/ICOMOS, or their representatives, to observe in situ the application of the Master Plan for Machu Picchu.

The Bureau may wish to examine the above report and information which may be available at the time of its session and take the appropriate decision thereupon. Among other things, it may wish to consider if a second IUCN/ICOMOS mission is required.

In formulating its decision/recommendation, the Bureau may wish to consider the following IUCN recommendation: ‘IUCN recommends that the Bureau takes note of the lack of progress in relation to solving the problem of the cable car, the new intentions of developing a highway between Cusco and this World Heritage site. The Bureau should also consider IUCN comments on the Master Plan that in general is a good strategic framework to enhance the protection of this site but lack a comprehensive programme of implementation. While the Bureau should compliment the State Party for this positive step it also should note the lack of progress from the State Party to organise and promote the work of the Management Committee as a first step to implement the Master Plan. Noting these points IUCN recommends to the Bureau to include this site on the List of World Heritage in Danger.’

New information: The Bureau at its twenty-third session requested the World Heritage Centre, IUCN and ICOMOS to undertake a mission to Machu Picchu.

The Secretariat informed the Bureau that the Permanent Delegation of Peru to UNESCO had invited an expert mission to Peru to observe in situ the application of the Master Plan for Machu Picchu. It also informed that the National Institute for Natural Resources (INRENA) and the National Institute for Culture (INC) had provided information on the creation of a Management Unit for the Sanctuary that was foreseen in the Master Plan for Machu Picchu and in the National Plan for Protected Areas and that its first meeting was scheduled for 26 June 1999. This Management Unit will prepare short and middle-term operational plans for the implementation of the Master Plan. As to the cable car system, INRENA and INC had informed that the Environmental Impact Assessment had been reviewed critically and had not been accepted yet.

The Secretariat furthermore informed that it had received a great number of communications and appeals in which individuals, scientists and non-governmental organizations expressed concerns and opposition to the plans for the cable car system. These communications stated that its impact would seriously affect the natural and cultural values, and could increase the level of tourists to unacceptable levels.

Both IUCN and ICOMOS stated that the Master Plan provides a good strategic framework, but that operation plans will be required to implement it effectively. Particular attention should be given to the management of tourism and the research and preservation of the archaeological resources of the Park.

The Director of the National Institute for Natural Resources (INRENA) emphasized the commitment of INRENA and INC to protect the integrity of the Park in a joint effort through the management structure that is foreseen in the Master Plan, i.e. the Management Unit. She noted concerns about the quality and quantity of tourism to the site and expected that a tourism management plan would be ready in a few months. As to the cable car, she stated that the Master Plan does not propose or endorse the cable car and that the Environmental Impact Assessment so far has not provided sufficient information for a thorough evaluation. On other projects, she noted that an hotel extension had been firmly rejected and that information on any other project would be made available to the Secretariat. She concluded by saying that the Government would welcome an expert mission as proposed by the Secretariat.

Recalling (i) the decision of the Committee at its twenty-second session, (ii) the invitation from the Government of Peru that IUCN and ICOMOS undertake a second expert mission and (iii) the concerns expressed by the advisory bodies, the Bureau adopted the following:

“The Bureau takes note of the information provided by the Government of Peru through its letters dated 18 and 23 June 1999. It also notes the comments and observations made by IUCN and ICOMOS on the Master Plan for the Historic Sanctuary of Machu Picchu, as well as on projects that are, or may be, under discussion and that would have serious impacts on the World Heritage site.

With reference to the cable car system and other possible works or projects, the Bureau regrets that no detailed information has been provided particularly on the plan for the cable car and the corresponding Environmental Impact Study. It reiterates the request made by the World Heritage Committee at its twenty-second session that all relevant documentation and provisions with regard to the management structure and Master Plan for the Sanctuary, the cable car system (Environmental Impact Study, detailed plans, etc) as well as other works or projects that are or will be considered for implementation within the boundaries of the World Heritage site, or outside the site but likely to impact on it, be transmitted as soon as they become available to the World Heritage Centre for review by IUCN and ICOMOS and examination by the Bureau and/or the Committee.

The Bureau requests IUCN, ICOMOS and the World Heritage Centre to undertake a second expert mission to Machu Picchu to assess:

The report of the mission should be presented to the World Heritage Committee at its twenty-third session for examination and further action.

As suggested by the Rapporteur, the Secretariat, the advisory bodies and the Peruvian authorities will collaborate in drawing up detailed terms of reference for the mission.

"The Committee, having examined the report of the World Heritage Centre-IUCN-ICOMOS mission to the Historic Sanctuary of Machu Picchu (made available to the Committee as Information Document WHC-99/CONF.209/INF.21), endorsed the conclusions and recommendations contained in it.

The Committee congratulated the Government of Peru on the adoption of the Master Plan and the establishment of the Management Unit. It urged the Government of Peru to ensure that all institutions, authorities and agencies involved in the Sanctuary give their full support to the Management Unit for the Historic Sanctuary of Machu Picchu so that this unit can effectively and efficiently fulfil the tasks entrusted to it.

The Committee recognized that there is strong tourism pressure on the site and that the studies proposed in recommendations 6, 7 and 8 of the mission report would allow this matter to be addressed in an integrated manner.

The Committee requested the Government of Peru to submit, by 15 April 2000 for transmission to and examination by the Bureau at its twenty-fourth session, a report that should include its response to the mission's conclusions and recommendations, as well as information on the progress made in the preparation and execution of operational plans for the implementation of the Master Plan for the Historic Sanctuary of Machu Picchu."

The Bureau may wish to examine information that will be provided at the time of its session and take the appropriate decision thereupon. 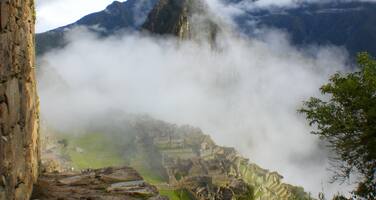