New information: The State Party, via a letter dated 28 September 1999, has submitted a detailed report on the project for monitoring the state of conservation of Srebarna. The report, and the covering letter, have been transmitted to IUCN for review and comments. IUCN will analyse the report in order to know the extent to which the State Party has addressed the observations and recommendations of the twenty-second session of the Committee (Kyoto, Japan, 1998) on the state of conservation of this property.

The Bureau noted that state of conservation reports of three of the fifteen natural heritage properties inscribed on the List of World Heritage in Danger, namely Srebarna Nature Reserve (Bulgaria), the Everglades National Park and Yellowstone National Park (United States of America) are due by 15 September 1999 and will be submitted to the twenty-third ordinary session of the Committee, to be convened from 29 November to 4 December 1999 in Marrakesh, Morocco. The Bureau examined the state of conservation reports on the following twelve natural heritage sites included in the List of World Heritage in Danger.

The Committee was informed that the State Party had submitted a detailed report on the project for monitoring the state of conservation of Srebarna and, in accordance with the request of the twenty-second session of the Committee (Kyoto, Japan, 1998), the Ministry of Environment and Water of the Republic of Bulgaria had submitted a National Report "concerning the progress in restoration of ecological status of Srebarna Reserve in accordance with its removing from the List of World Heritage in Danger". IUCN and the Centre presented a review of the information contained in these reports and the Committee noted the following:

The Bulgarian Government has voted in the Law on Protected Areas (November 1998), and during 1999, developed and adopted a National Action Plan for Biodiversity Conservation. The Law, which is built upon Europe-wide legislation and directives, has enabled the implementation of a large number of urgent actions for protected areas, including that for Srebarna; e.g. the creation of decrees and regulations on the development of management plans, structure and actions of regional authorities and activities permitted within state owned protected areas. The Action Plan strengthens the ability of the Ministry of Environment and Water to co-ordinate actions of other economic sector agencies in areas outside of protected areas, thus strengthening the Ministry's authority to co-ordinate development actions in the region where Srebarna is located.

The Ministry of Environment and Water has widened collaboration with Romania and the rest of the countries of the Lower Danube to study the feasibility of enlarging the system of wetland areas in the Danube valley. During a meeting with the Romanian authorities, suggestions for the setting up of a working group have been made to co-ordinate biodiversity conservation along the banks of the Danube and the Black Sea coast. IUCN emphasised that such trans-border cooperation is critical for the conservation of flagship species such as the Dalmatian pelican.

The Ministry has increased efforts to involve the public in the management of Srebarna and surrounding areas. Participation of several schools and NGOs in programmes for monitoring water quality and the status of selected populations of animals and plants has been encouraged. The local public and the media have been fully appraised of the Government's efforts to restore Srebarna's World Heritage and protected area values. A new web-site for the Reserve has been opened at: http://www.ecolab.bas.bg/srebarna/ and provides data concerning the Government's efforts to protect the site.

The Committee noted the following trends that indicate continuing success of the restoration process:

The Committee decided to retain this site in the List of World Heritage in Danger but noted with satisfaction the continuing success in the recovery of the site and commended and encouraged the State Party to take all necessary measures to sustain current trends in ecological and population parameters that are being monitored. The Committee encouraged the State Party to continue to develop its co-operation with Romania and other countries of the Lower Danube to study the possibility, as per the Committee's recommendation made in 1998, of the establishment of a composite, trans-boundary "Danube Wetland World Heritage site". The Committee invited the State Party to submit an up-to-date report on the state of conservation of Srebarna to its twenty-fourth session in 2000. Based on a review of that report, IUCN and the Centre may propose to the twentyfourth session of the Committee, a process and a time-table for a final assessment of the results of the restoration of Srebarna and its possible removal from the List of World Heritage in Danger in 2001.

The Committee, based on IUCN’s review of the detailed report of the State Party that will be submitted at the time of its twenty-third session, may wish to take decisions and make recommendations as appropriate. 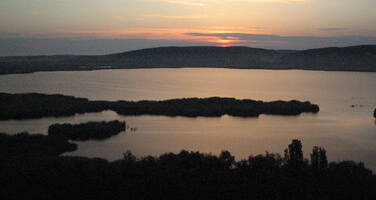