[Oral report by the Secretariat]

Inscription on the List of World Heritage in Danger: Dubrovnik (Yugoslavia)

27. Special attention was given by the Committee to the dangers threatening the World Heritage sites during armed conflict. The Secretariat informed the Committee of the situation of the historical City of Dubrovnik. It also announced the decision of the Director-General to launch an international campaign for the restoration of Dubrovnik.

28. Aware of the fact that it represents 123 States, including Yugoslavia, which are signatories of the Convention, the Committee expressed deep concern about the armed conflict, devastating a region that comprises several sites inscribed on the World Heritage List, in particular the Old City of Dubrovnik. It decided to urge the parties in conflict to do their best so that a ceasefire which allows as soon as possible for the repair of the damage already caused in the fighting area, in particular in Dubrovnik, in response to the appeal by the Director-General of UNESCO for international solidarity.

29. Recalling that the repeated requests of UNESCO to observe the obligations of the Convention concerning the protection of the World Cultural and Natural Heritage have so far not been heeded, and noting the state of exceptional emergency caused by the armed conflict, the Committee decided, in accordance with the provisions of Article 11, paragraph 4 of the Convention, to inscribe Dubrovnik on the List of World Heritage in Danger and to publicize this entry immediately.

30. Several delegates pointed out that the decision of the Committee should not be interpreted as an act of accusation but as the affirmation that all States Parties to the Convention are involved in this situation where a World Heritage city was seriously damaged by an armed conflict. The observer from Yugoslavia requested that the Committee should be cautious in this action, and stressed that in view of the importance of the situation, it is advisable to refer to all the sites inscribed on the World Heritage List, following the request of Yugoslavia.

Inscription on the List of World Heritage in Danger: Old City of Dubrovnik (Yugoslavia)

Noting the state of exceptional emergency caused by the armed conflict, the Committee decided to inscribe the Old City of Dubrovnik on the List of World Heritage in Danger, in accordance with Article 11, paragraph 4 of the Convention. 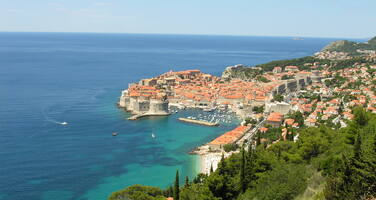