Invasive species; hydrological changes due to the construction of the dam.

At its 28th session (Suzhou, 2004), the Committee requested the State Party to invite the World Heritage Centre and IUCN to undertake an evaluation mission to assess all the problems described in the report provided in 2004, as well as to evaluate the seriousness of the threat posed by the proliferation of Typha australis and other invasive aquatic species. In a letter dated 5 April 2005, the State Party invited the World Heritage Centre and IUCN to undertake this mission in May 2005 to review the situation of the property with a view to its possible removal from the List of World Heritage in Danger. The results of this mission will be presented at the 29th session of the Committee and a revised draft decision could be proposed to take account of the conclusions.

3. Takes note of the report of the joint 2005 UNESCO-IUCN monitoring mission, presented by IUCN at its 29th session (Durban, 2005),

4. Commends the State Party of Senegal on the progress made regarding the control of the invasive species (Salvinia molesta and Pistia stratiotes) within the Park and on the protection of the values for which the site was inscribed;

5. Expresses serious concern over the fact that the systematic water management system which addressed regulation of water flows, hydrological monitoring, and other factors and which was put in place in the property with assistance of IUCN Senegal, is no longer operational, leading to salinization of soils, increased sedimentation and an increasing impact of invasive species;

6. Notes the other threats and issues observed by the joint 2005 UNESCO/IUCN monitoring mission, in particular cattle grazing and hunting in the property and buffer zone, lack of a management plan and sustained funding for the management of the property and constant changes in staff, resulting in a loss of capacity to manage the property;

8. Requests the State Party to implement the other recommendations of the monitoring mission with regard to visitor management, access management, management of the buffer zone and re-organisation of the National Park Authority;

9. Invites the State Party to organize as soon as possible a multi-stakeholder workshop to discuss the implementation of the recommendations of the mission, create new partnerships with local stakeholders for the management of property and its buffer zone and update the 2002 management plan;

10. Requests the State Party to submit by 1 February 2006 a report on the state of conservation of the property and on progress in the implementation of the recommendations of the 2005 monitoring mission, for examination by the Committee at its 30th session (Vilnius, 2006);

11. Decides to retain the Djoudj National Bird Sanctuary (Senegal) on the List of World Heritage in Danger.
Read more

3. Urges the State Party to facilitate the organisation of the joint UNESCO/IUCN mission, which will enable recommendations to be made to limit the proliferation of the Typha australis and other invasive species

4. Decides to maintain the Djoudj National Bird Sanctuary on the List of World Heritage in Danger. 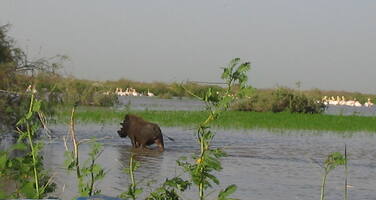