Earth heritage : A common past… and future 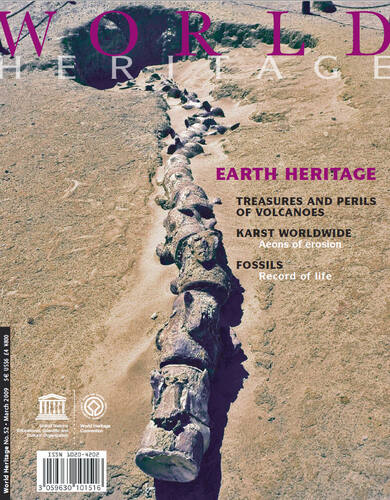 This issue of World Heritage is devoted to a number of truly extraordinary World Heritage sites that allow a better understanding of the history of the Earth and the formation of landscape. It is no surprise that UNESCO has acknowledged this diversity as the basis of the International Year of Planet Earth, a celebration that concludes in 2009. Representatives of two of the global networks working to support Earth sciences: Peter Bobrowsky, Secretary General of the International Union of Geological Sciences (IUGS), and Andrew Goudie, President of the International Association of Geomorphologists (IAG), shared with us their reflections on IYPE and the need to promote the role of Earth sciences in society.

The World Heritage List includes seventy-four sites whose outstanding universal value has been recognized under the selection criterion for geology and geomorphology. These exceptional places include many of the most spectacular landscapes found anywhere on Earth, and connect with the ‘deep time’ of the planet and the record of life demonstrated by the most dramatic fossil sites.

Many of the world’s islands, including Hawaii, the Canaries and the Galápagos, are of volcanic origin, and the process of their emergence has quite recently been made observable by the sudden appearance, in 1963, of the island of Surtsey off the coast of Iceland. Scientists have been studying Surtsey with the greatest attention ever since, and it was recognized as a World Heritage site in 2008. World Heritage institutions are now taking an active interest in geological values, and extending their interests to such deep-sea phenomena as the Mid- Atlantic Ridge.

Vast regions of the Earth are covered with spectacular rock formations that stand as records of the way the planet reached its present form. Karst areas, with their great limestone gorges, caverns and underground rivers, are found notably in South-Eastern Europe, China, Madagascar and Viet Nam. Their stone forests and mountainous formations, almost beyond comprehension, have been carefully observed and faithfully painted by Chinese artists for centuries. South China Karst, another recently inscribed World Heritage site, includes some of the most spectacular representations of these limestone landscapes.

A number of other sites offer significant testimony to the formation of such great mountain ranges as the Alps and the Himalayas, through the relentless movement of the Earth’s great tectonic plates, while stratigraphic sites worldwide reveal the tremendous range covered by the Earth’s history and establish a reliable chronology. Wadi Al-Hitan in Egypt, which tells the story of the early evolution of whales, the ‘Coal Age Galápagos’ of Joggins Fossil Cliffs in Canada, or the record of the Age of the Dinosaurs seen at Dorset and East Devon Coast, United Kingdom, are among the World Heritage properties that illustrate the incredible story of life on Earth, while other sites focus on human evolution.

These exceptional geological formations convey values that are of enormous scientific interest and also form links to the origins of the planet and to human ancestry. The visually impressive nature of many of them is convincingly apparent in the articles and stunning photographs assembled here.