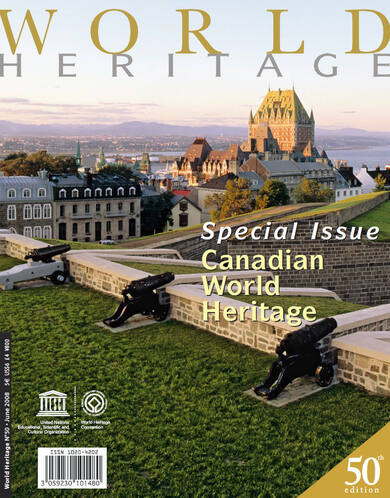 The 14 World Heritage sites of Canada presented in this issue offer a fascinating pattern. Indeed, they reflect key aspects of the evolution of the very concept of World Heritage over the past 32 years.

The sites predictably include historic cities like Old Québec and Lunenburg, great natural sites like Nahanni National Park, Wood Buffalo National Park, the Canadian Rocky Mountain Parks and Gros Morne National Park; transboundary sites such as Kluane/Wrangell-St. Elias/Glacier Bay/Tatshenshini-Alsek and Waterton Glacier International Peace Park; sites of paramount importance to palaeontology like Dinosaur Provincial Park and Miguasha National Park; but also sites of historic interest such as SGang Gwaay, a moving testimony to the enduring culture of the Haida people, the spectacular Head-Smashed-In Buffalo Jump, the early 19th-century feat of engineering of the Rideau Canal, and the modest but fascinating 11th-century Viking settlement of L’Anse-aux-Meadows in Newfoundland.

It is significant that some of these sites are jointly managed by Parks Canada and representatives of First Nations. In others, where there is no formal cooperative management mechanism with Aboriginal people, Parks Canada is nonetheless making increased efforts to engage them in the protection, conservation and presentation of this heritage. These efforts represent an important evolution in the relationship between different cultures and their shared responsibilities for protecting heritage in the present context of the world.

The idea of World Heritage evolved in a highly significant manner over the years, as it became increasingly apparent that not all cultures and civilizations built monuments of stone, and that unique sites could also bear the imprint of human action and history in far more discreet forms. It was thus recognized that certain striking topographical features could be seen to embody a spiritual vision.

This realization led to the increasingly interesting concept of the ‘cultural landscape’. With this came the attendant notion of cultural diversity and the need for its preservation – a need that is clearly apparent in the Canadian approach to World Heritage issues.

Tourism also exposes cultures to certain risks, since tourists may be tempted to visit the world armed with their own assumptions. We should therefore be at pains to remind them that each culture was shaped to deal with the truly fundamental issue that confronts every society: how do we cope with the human condition in the particular context in which history and geography have placed us?

All cultures have a story that attempts to deal with that sort of question. And the nature of that story commands the shape of the language people speak and the thoughts they are capable of thinking. This is the basis of cultural diversity. It is also one of the challenges confronting our present global society. The Canadian World Heritage community has developed a brave and honest response to it.