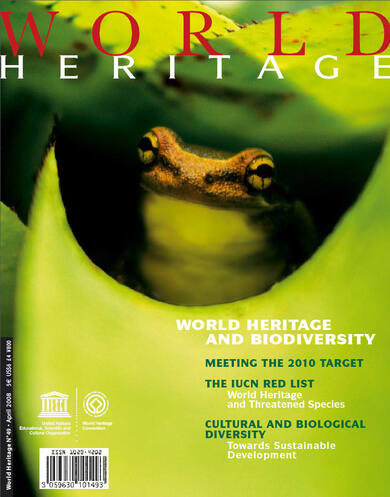 A number of World Heritage routes have played a significant part in the history of the five continents – and the way we focus on them in this issue illustrates how far our thinking has evolved in the thirty-five years since the World Heritage Convention was drafted and adopted.

The initial idea was the logical outgrowth of the need to protect significant monuments and natural sites threatened by recent social and economic mutations, when old values were often rashly cast aside to make way for the new – or simply for immediate profit. Any idea is like a seed. Once it is planted in the mind, it follows its own way. So, too, the seed of the Convention grew and expanded itself. The great monuments and sites, like so many splendid blazons of the cultures of the world, were the first to be inscribed. But it soon became apparent that few of our cultures are entirely sedentary. Many of them have felt the invincible urge to travel the world, whether for trade or conquest, and wherever they went, they carried their seeds with them.

Monuments may be tracked in a simple chronology, but the great routes of civilization open the doors wide to history. Humans are an itinerant species. Many of the greatest tales of world literature relate a journey: the Epic of Gilgamesh, the Odyssey of ancient Greece, the Chinese Si Yeou Ki [Journey to the West], the Divine Comedy, Don Quixote or Moby Dick. And the journey they relate is that of a human life and a human society, whose movement through time is recorded as a journey through the world itself. Such journeys are also recorded on the face of the Earth, and the great routes discussed in this issue, the Desert Routes, the Spice Routes, the ‘Dreaming Tracks’ of indigenous Australians, the Route of Santiago de Compostela and the Andean Qhapaq Ñan are all epic in their proportions.

In the interview published in this issue, Dr Sandy Blair compares the scale and impact of the ‘Dreaming Tracks’ with those of the Silk and Frankincense Routes. These tracks are an eloquent illustration of the connection between tangible and intangible heritage, as they are mapped in the traditions of the many societies who wove an intricate web of myth and cast it across their continent – thus recording their vital resources and their laws.

It is a comparison that suggests just how far the concept of World Heritage has evolved in its perception of the historic human adventure.

Towards a holistic vision of World Heritage The natural links between cultural and biological diversity represent a source of exchange, creativity and innovation that help to foster sustainable development.

Interview with Ahmed Djoglaf, Executive Secretary of the Convention on Biological Diversity

Field trip points out needs; The Great Rift Valley Conservation Initiative: an African initiative; World Heritage and the Arctic; Revised methods for new needs; New challenges for World Heritage in Asia and the Pacific; Getting the nominations right for Africa; The Sundarbans – a site of devastation.

A selection of books, brochures and publications, press articles and multimedia dedicated to World Heritage.