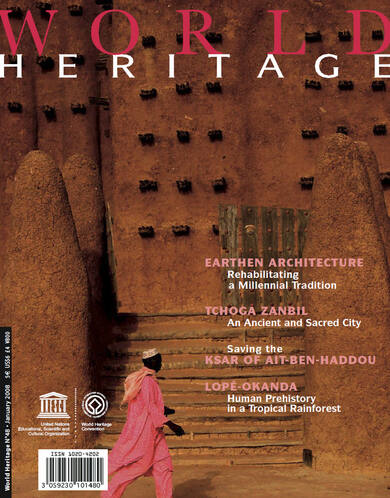 At some time during the past one hundred years or so, the great, multimillennial tradition of earthen architecture, which even today is a dominant technique in every world civilization, fell victim to the Modern Ideal.

Being ‘modern’, some thought, meant eating, clothing and housing oneself as one did in the industrial world. If some lived and worked in glass-fronted concrete skyscrapers, so should all others, even in the tropics. Modernity was a package deal: take it or leave it. Yet earthen architecture still represented a sizeable proportion of world architecture. As this issue of World Heritage shows, it is now returning to favour.

We are beginning to understand that the advantages of modern tech- nology, medicine and business knowhow can be adapted to regional conditions and cultural models, while styles of housing have always been an integral part of the identity and personal dignity of those who live there.

As this issue so amply suggests, earthen architecture, in all its di- versity, radiates an aesthetic quality that must absolutely be preserved, acknowledged and transmitted. It also offers great advantages in economic and ecological terms. The materials cost nothing and their use releases no unwanted carbon in the air.

The aesthetic and ecological advantages of earthen architecture are praised by all the authors published in this issue, and its power of seduc- tion is attested by entire cities still built of earth. These cities are found not only in Algeria, Brazil, Cuba, Guatemala, Libya, Mexico, Morocco, Peru, Uzbekistan, Venezuela and Yemen, but also in France, Germany, Italy and Spain.

Nor should we forget the several major archaeological monuments inscribed on the World Heritage List, including Tchogha Zanbil in Iran. The recent renewal of interest in this architecture and its recognition by World Heritage institutions has also favoured the development of new techniques that will prove useful in future constructions, prompted by the economic and ecological advantages of this material. All this means that we can hold out good hopes for the resurgence of a build- ing technique whose full potential has not yet been exhausted.

In Focus
A global challenge: preserving earthen architecture
Across the world and throughout the ages, human societies have built their homes and cities with earth. An abundant and readily available material, earth is found everywhere, directly underfoot. All buildings made with it attest to the resourcefulness of architectural traditions that have been in use for thousands of years.

Ksar of Ait-Ben-Haddou
Hopes and perils.

Interview
Interview with Jean Dethier
Living with earth – the future of a universal and millenial building culture.

In Danger
Dresden Elbe Valley status threatened; Tourism as a threat to the Galápagos Islands; Progress with the conservation of the Old City of Jerusalem.

In print and online
A selection of books, brochures and publications, press articles and multimedia dedicated to World Heritage.