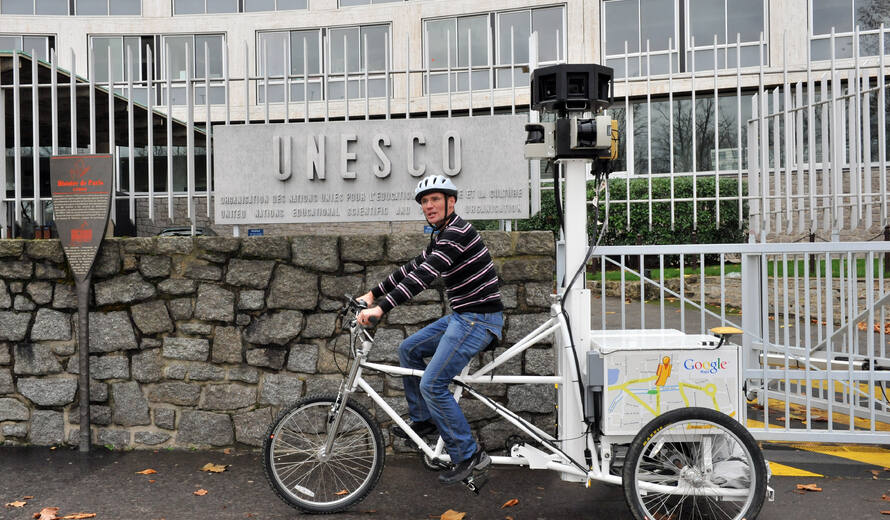 Sites of outstanding universal value inscribed on the World Heritage List - the Palace of Versailles in France, the historic centre of Prague in the Czech Republic and the old town of Cáceres in Spain, for example - can now be explored online by internet users around the world, thanks to an alliance signed by UNESCO and the international corporation Google.The agreement makes it possible for internet users to visit 19* of the 890 World Heritage properties via Google's Street View interface. All the other sites on the List will be shown on the Google Earth and Google Maps interfaces.

The 19 sites are located in Spain, France, Italy, the Netherlands, the Czech Republic and the United Kingdom. Street View provides nearly spherical panoramic (360° horizontal and 290° vertical) views taken by cameras mounted on vehicles. Once obtained, these images are overlaid on Google Maps' satellite views - the process can take several months. When the specially-equipped cars cannot reach sites to be photographed, tricycles are used.

"The alliance with Google makes it possible to offer virtual visits of the sites to everyone, to increase awareness and to encourage participation in the preservation of these treasures," said UNESCO's Director-General, Irina Bokova.

"Cultural and natural heritage sites are an irreplaceable source of inspiration and fascination. This is an exciting project and we're thrilled to be working with UNESCO to make more World Heritage sites universally accessible and useful to all," said Carlo d'Asaro, Google's Vice-President for Southern Europe, Middle East and Africa.

At UNESCO's suggestion, Google will soon be visiting and photographing other sites on the List. The focus is on harder-to-access sites, which will be photographed with the permission of site managers. They can then be appreciated by millions of people who might never have the opportunity to visit them otherwise. The sites are located notably in South Africa, Brazil, Canada, Mexico and the Netherlands.

In future, Google and UNESCO will also work together to provide online access, via Google Maps, YouTube and Google Earth, to maps, texts and videos pertaining to UNESCO's Biosphere Reserves, to documentary heritage inscribed on the Memory of the World Register and to endangered languages.

About UNESCO:
The United Nations Educational, Scientific and Cultural Organization (UNESCO) was founded in 1945 and it has 193 Member States. One of its main mandates is to encourage the identification, protection and preservation of cultural and natural heritage around the world considered to be of outstanding value to humanity. This is the goal of the Convention concerning the Protection of the World Cultural and Natural Heritage, an international treaty adopted by UNESCO in 1972.

About Google:
Google's innovative search technologies connect millions of people around the world with information every day. Founded in 1998 by Stanford Ph.D. students Larry Page and Sergey Brin, Google today is a top web property in all major global markets. Google's targeted advertising program provides businesses of all sizes with measurable results, while enhancing the overall web experience for users. Google is headquartered in Silicon Valley with offices throughout the Americas, Europe and Asia.