Situated on the banks of the Vltava river, the town was built around a 13th-century castle with Gothic, Renaissance and Baroque elements. It is an outstanding example of a small central European medieval town whose architectural heritage has remained intact thanks to its peaceful evolution over more than five centuries. 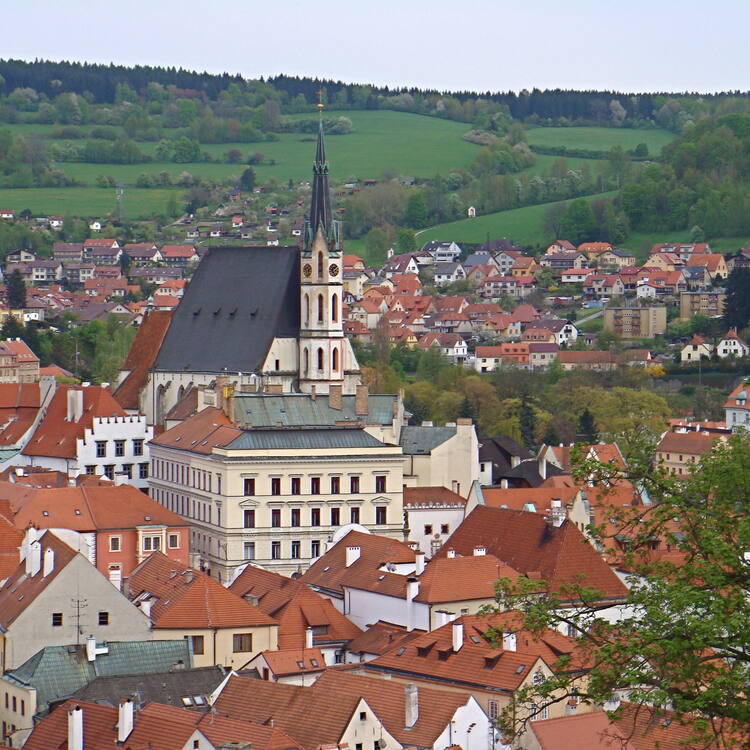 The town of Český Krumlov is located in the South Bohemian Region of the Czech Republic. Situated on both banks of the Vltava (Moldau) river, the town was built below a magnificent castle founded in the 13th century. The river meander and rocky slopes of the castle hill are the most important elements which along with the link to the picturesque neighbouring landscape, determine not only the impressive urban composition of the historic centre but the dominating position of the castle as well.

The Historic Centre of Český Krumlov is an outstanding example of a small Central European medieval town whose architectural heritage has remained intact thanks to its peaceful evolution over more than several centuries. This feudal town, a former centre of a large estate owned by powerful noble families who played an important role in the political, economic and cultural history of Central Europe, was founded in the Middle Ages and underwent Renaissance and Baroque transformations. As it remained almost intact, it has retained its street layout, which is typical of planned medieval towns, as well as many historic buildings including their details such as the roof shapes, the decoration of Renaissance and Baroque facades, vaulted spaces, as well as original layouts and interiors.

The castle features Gothic, Late Gothic, Renaissance and Baroque elements. It is dominated by the Gothic Hrádek with its round tower; this was subsequently converted into a Baroque residence with the addition of a garden, the Bellaire summer pavilion, a winter riding school, and a unique Baroque theatre in 1766. Latrán (settlement developed to the east) and the town proper contain undisturbed ensembles of burgher houses, the oldest being in High Gothic style. They are notable for their facades, internal layouts, and decorative detail, and especially carved wooden Renaissance ceilings. Český Krumlov also experienced considerable ecclesiastical development illustrated by the major 15th century church of St. Vitus and monasteries of various preaching and itinerant orders.

Criterion (iv): Český Krumlov is an outstanding example of a Central European small town dating from the Middle Ages which owes the structure and buildings of its historic core to its economic importance and relatively undisturbed organic development over some five centuries. Český Krumlov grew up within a meander of the Vltava River, which provides a natural setting of great beauty. Its evolution over time is evident with startling clarity from its buildings and its urban infrastructure.

The Historic Centre of Český Krumlov is a property of high authenticity. Its present form and appearance closely reflect the type of a town linked to the noble residence since the Middle Ages. The historic centre has preserved its original layout, as well as the characteristic castle-city relationship very clearly, thanks to its undisturbed development over several centuries. It remains untouched by the devastating effects of 19th-century industrialization, neglect during the communist era and thoughtless developments of the past decades. The high degree of authenticity is based on the dramatic setting of the urban townscape and its natural environment, as well as on a large number of preserved historic details. Restoration works on the facades of the buildings are carried out in compliance with strict international standards for heritage conservation. Only traditional materials and techniques are used.

The Historic Centre of Český Krumlov is protected by Act No. 20/1987 on State Heritage Preservation as amended, as an urban conservation area (urban heritage reservation according the Act). The castle with the garden and a Parish church inside the historic centre are designated as national cultural heritage sites (under the Act mentioned above and under the relevant regulations); hence they enjoy the highest degree of legal protection. In addition, the historic centre includes several dozens of buildings that are designated as cultural heritage sites under the Act mentioned above. From a legal point of view, the protection of the buffer zone is strengthened by the fact that the Plešivec urban heritage zone is situated within its boundaries. The pressure to allow new construction in the buffer zone is regulated by the Act mentioned above and by the valid Land Use Plan, which stabilizes the functions of plots and areas within the whole town of Český Krumlov; that means property and its buffer zone. All specific details of building projects (new structures, their volumes and heights) are the subject of consideration by relevant authorities.

The responsibility for the property management is shared by the National Heritage Institute (a state organization) and the Municipality of Český Krumlov. Due to the extent of the property and its complicated ownership structure, maintenance and restoration of the various properties are subject to individual programmes that are coherent with the Programme for the Regeneration of Urban Heritage Reservations and Zones. Phase 4 of the Management Plan has been prepared in 2012, representing an up-date of the E- Management Plan. The main purpose of the Management Plan is to preserve the Outstanding Universal Value of the property. Since the beginning (2009), the document has been planned to apply to both key elements of the Municipal Heritage Site, the castle complex and the historic center.

Financial instruments for the conservation of the property mainly include grant schemes, funding through the programme of the Ministry of Culture of the Czech Republic allocated to the maintenance and conservation of the immovable cultural heritage and of areas under heritage preservation, as well as financial resources allocated from other public budgets. Since 2000, annual monitoring reports have been prepared at the national level to serve the World heritage property manager, the Ministry of Culture, the National Heritage Institute and other agencies involved.