This historic landscape garden features elements that illustrate significant periods of the art of gardens from the 18th to the 20th centuries. The gardens house botanic collections (conserved plants, living plants and documents) that have been considerably enriched through the centuries. Since their creation in 1759, the gardens have made a significant and uninterrupted contribution to the study of plant diversity and economic botany. 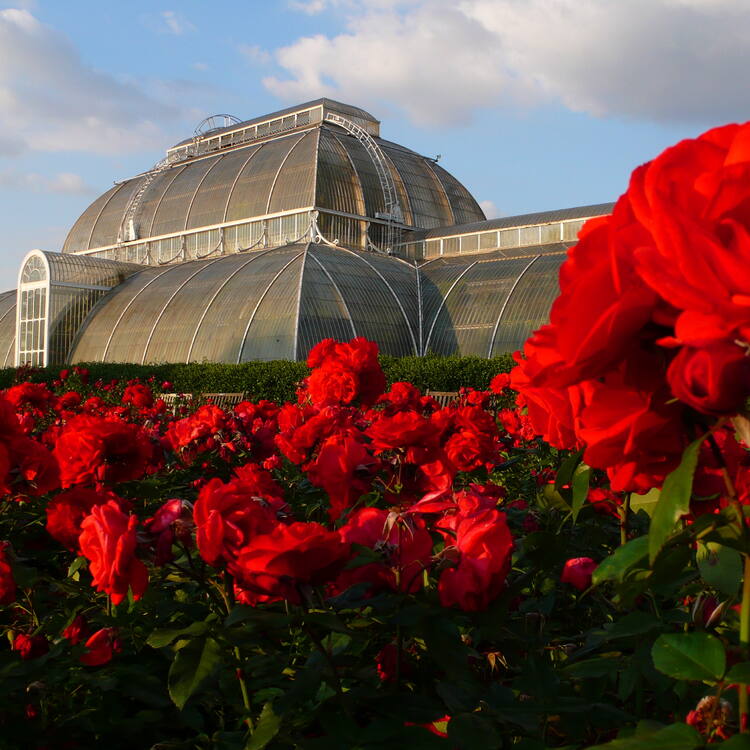 Set amongst a series of parks and estates along the River Thames' south-western reaches, this historic landscape garden includes work by internationally renowned landscape architects Bridgeman, Kent, Chambers, Capability Brown and Nesfield illustrating significant periods in garden design from the 18th to the 20th centuries. The gardens house extensive botanic collections (conserved plants, living plants and documents) that have been considerably enriched through the centuries. Since their creation in 1759, the gardens have made a significant and uninterrupted contribution to the study of plant diversity, plant systematics and economic botany.

The landscape design of Kew Botanic Gardens, their buildings and plant collections combine to form a unique testimony to developments in garden art and botanical science that were subsequently diffused around the world. The 18th century English landscape garden concept was adopted in Europe and Kew's influence in horticulture, plant classification and economic botany spread internationally from the time of Joseph Banks' directorship in the 1770s. As the focus of a growing level of botanic activity, the mid 19th century garden, which overlays earlier royal landscape gardens is centred on two large iron framed glasshouses - the Palm House and the Temperate House that became models for conservatories around the world.  Elements of the 18th and 19th century layers including the Orangery, Queen Charlotte's Cottage; the folly temples; Rhododendron Dell, boundary ha-ha; garden vistas to William Chambers' pagoda and Syon Park House; iron framed glasshouses; ornamental lakes and ponds; herbarium and plant collections convey the history of the Gardens' development from royal retreat and pleasure  garden to national botanical and horticultural garden before becoming a modern institution of conservation ecology in the 20th century.

Criterion (ii): Since the 18th century, the Botanic Gardens of Kew have been closely associated with scientific and economic exchanges established throughout the world in the field of botany, and this is reflected in the richness of its collections. The landscape and architectural features of the Gardens reflect considerable artistic influences both with regard to the European continent and to more distant regions;

Criterion (iv): The landscape gardens and the edifices created by celebrated artists such as Charles Bridgeman, William Kent, Lancelot 'Capability' Brown and William Chambers reflect the beginning of movements which were to have international influence;

The boundary of the property contains the elements that bear witness to the history of the development of the landscape gardens and Kew Gardens' uninterrupted role as national botanic garden and centre of plant research. These elements, which express the Outstanding Universal Value, remain intact. The Buffer Zone contains the focus of one of the garden vistas on the opposite bank of the Thames River - Syon Park House - together with other parts of the adjacent cultural landscape (Old Deer Park - a royal estate south of Kew Gardens, Syon Park on the opposite bank of the Thames, the river from Isleworth Ferry Gate to Kew Bridge, the historic centre of Kew Green with the adjacent buildings and the church, and then to the east, the built-up sectors of 19th and 20th century houses). Development outside this Buffer Zone may threaten the setting of the property.

Since their creation in the 18th century Kew Gardens have remained faithful to their initial purpose with botanists continuing to collect specimens and exchange expertise internationally. The collections of living and stored material are used by scholars all over the world.

The 44 listed buildings are monuments of the past, and reflect the stylistic expressions of various periods. They retain their authenticity in terms of design, materials and functions. Only a few buildings are being used for a purpose different from that originally intended (the Orangery now houses a restaurant). Unlike the works of architecture, in each of the landscaped garden areas, the past, present and future are so closely interwoven (except in the case of vestigial gardens created by significant artists, such as the vistas), that it is sometimes difficult to separate the artistic achievements of the past in terms of the landscape design of the different periods. Recent projects such as recutting Nessfield's beds behind the Palm House have started to interpret and draw attention to the earlier landscapes created by Capability Brown and Nessfield. Other projects are proposed in the overall landscape management plan subject to resourcing.

The property is included in a conservation area designated by the London Borough of Richmond upon Thames. Part of the Buffer Zone is protected by a conservation area in the London Borough of Hounslow. Forty four buildings and structures situated on the site have been listed under the Listed Buildings and Conservation Areas Act 1990 as buildings of special architectural and historical interest. The whole site is Grade I on the English Heritage Register of Park and Gardens of Special Historic Interest in England Permission to carry out works or change functions is subject to the approval of the local authorities, who consult English Heritage in the case of listed buildings and conservation areas.

Protection of the property and the Buffer Zone is provided by development plans in the planning systems of the London Boroughs of Richmond upon Thames and Hounslow and by the London Plan (the Regional Spatial Strategy) and by designation.

At the time of inscription the World Heritage Committee encouraged the State Party to include on the staff of the Royal Botanic Gardens a landscape architect or other specialist qualified in the history of art and history in general, so that architectural conservation activities can be coordinated on-site.  Landscape architects with experience of working in historic landscapes have been appointed to provide this advice.