The outstanding contribution made by the people of the Netherlands to the technology of handling water is admirably demonstrated by the installations in the Kinderdijk-Elshout area. Construction of hydraulic works for the drainage of land for agriculture and settlement began in the Middle Ages and have continued uninterruptedly to the present day. The site illustrates all the typical features associated with this technology – dykes, reservoirs, pumping stations, administrative buildings and a series of beautifully preserved windmills. 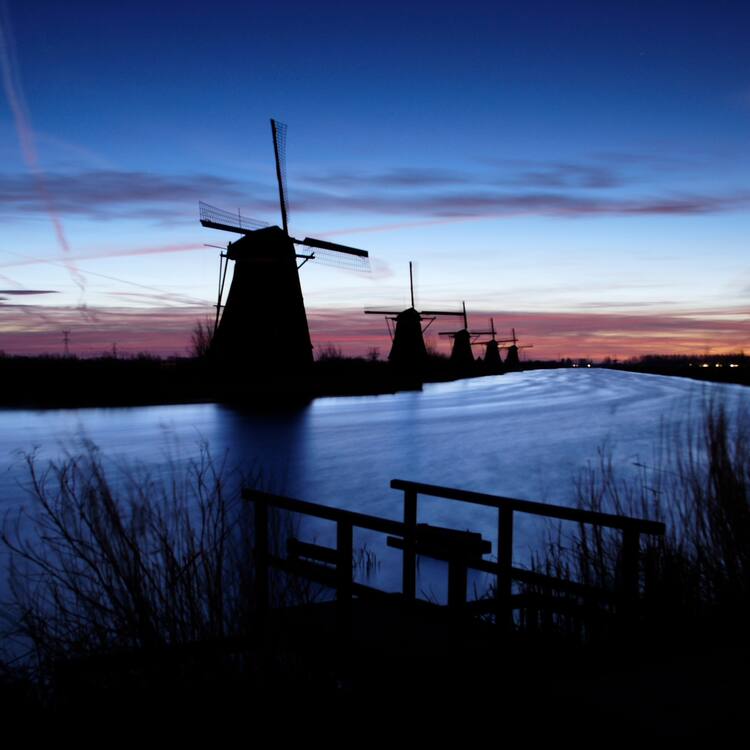 Mill Network at Kinderdijk-Elshout © OUR PLACE The World Heritage Collection

The Mill Network at Kinderdijk-Elshout is a group of buildings in an exceptional human-made landscape in which the centuries-long battle of the Dutch people to drain parts of their territory and protect them against further inundation is dramatically demonstrated through the survival of all the major elements of the complex system that was devised for this purpose.

Construction of hydraulic works for the drainage of land for agriculture and settlement began in the Middle Ages and has continued uninterruptedly to the present day. The property illustrates all the typical features associated with this technology: polders, high and low-lying drainage and transport channels for superfluous polder water, embankments and dikes, 19 drainage mills, 3 pumping stations, 2 discharge sluices and 2 Water Board Assembly Houses. The beautifully preserved mills can be divided into three categories: 8 round brick ground-sailers, 10 thatched octagonal smock mills, and one hollow post mill.

The installations in the Kinderdijk-Elshout area demonstrate admirably the outstanding contribution made by the people in Netherlands to the technology of handling water.

The landscape is striking in its juxtaposition of its horizontal features, represented by the canals, the dikes, and the fields, with the vertical rhythms of the mill system. There is no drainage network of this kind or of comparable antiquity anywhere else in the Netherlands or in the world.

Criterion (i): The Mill Network at Kinderdijk-Elshout is an outstanding human-made landscape that bears powerful testimony to human ingenuity and fortitude over nearly a millennium in draining and protecting an area by the development and application of hydraulic technology.

Criterion (ii): The Mill Network at Kinderdijk-Elshout with its historic polder areas, high and low-lying drainage channels, mills and millraces, pumping stations, outlet sluices and Water Board Assembly Houses is an outstanding example of the development of Dutch drainage techniques which were copied and adapted in many parts of the world.

Criterion (iv): The Mill Network at Kinderdijk-Elshout is an extremely ingenious hydraulic system which still functions today and which throughout the ages made it possible to settle and cultivate a large area of peat land. It is nationally and internationally the only example on this scale, making it a unique and outstanding example of an architectural ensemble as well as a cultural landscape which typifies the Netherlands and illustrates a significant stage in human history.

The area retains all the relevant features such as the polders with drainage channels and dikes, brick, wooden and thatched windmills, millraces, pumping stations, discharge sluices and Water Board Assembly Houses without any irrelevant or discordant intrusions. The Elshout discharge sluices were reduced to two and reconstructed in the mid-1980s; in 1924 the installations of the Wisboom pumping station were changed from steam driven to electricity. The property is of an adequate size to ensure the complete representation of the features and processes which convey the significance of the mill network.

The Mill Network at Kinderdijk-Elshout, with its historic ‘high and low polder areas with natural drainage’, watercourses, mills and millraces, pumping stations, outlet sluices and Water Board Assembly Houses is practically unchanged. It has been able to retain its vast, typically Dutch and characteristic features of the landscape and the environment, created since the Middle Ages and specifically during the first half of the 18th century. The nineteen mills that form this group of monuments are all still in operating condition, since they function as fall-back mills in case of failure of the modern equipment. The authenticity in workmanship and setting of the structures and in the distinctive character and integrity of the human-made landscape is very high. No changes have been made to the functional hydraulic relationships between drainage machines, polders, and rivers since the sixteen mills of De Nederwaard and De Overwaard were built in 1738 and 1740 respectively, and so the authenticity of the system is also high. The reservoir system of both is also intact, the lower reservoir of De Nederwaard dating back to 1369 and that of De Overwaard to 1365.

Mill restoration, which commenced in 2008, was in keeping with the techniques used at the time the mills were constructed. Authentic materials will also be used in the restorations. The project, which is headed by the Cultural Heritage Agency of the Netherlands, was completed in 2011.

Nineteen mills, the Wisboom pumping station, and the Waardhuis building are listed as national heritage sites under the 1988 Monuments and Historic Buildings Act [Monumentenwet 1988]. In 1993, the area was designated a conservation area [beschermd dorpsgezicht] pursuant to Article 35 of the 1988 Monuments and Historic Buildings Act. At the same time, the Kinderdijk-Elshout World Heritage property is a protected nature reserve under the Nature Conservancy Act [Natuurbeschermingswet], is part of the Natura 2000 network, and is covered by Council Directive 79/409/EEC on the Conservation of Wild Birds.

The Provincial government’s Spatial Planning Decree lays down rules for the mills that are meant to guarantee open exposure to the wind and a permanent view of the mills. Restrictions have been placed on the height of any buildings, trees or other plants within a 400-metre radius of the mills (the mill biotope). The Provincial Spatial Planning Decree is binding for both individuals and municipalities.

Most of the land in the Municipal Zoning Plan for the Rural Area of Nieuw-Lekkerland is a designated nature conservation area. Building is not permitted here; any earth-moving activity may only be carried out after a permit has been obtained. The southern part of the Kinderdijk-Elshout World Heritage property is part of the Municipality of Alblasserdam; most of it has been zoned as an “agricultural area with valuable natural and landscape features”. Water and dike management is in the hands of the Rivierenland Water Board. The protection arrangements are considered to be effective.

The World Heritage site-holder, the Kinderdijk World Heritage Foundation [Stichting Werelderfgoed Kinderdijk; SWEK], has held a 30-year lease on the property’s nineteen mills, including the surrounding premises, access paths and any outbuildings, since 2005. Its goal is to exercise effective management according to a set of uniform standards. The Wisboom Pumping Station was refurbished and opened in 2011 as a visitors’ centre. One of the mills is also open for visitors.

The Municipal Zoning Plan for the Rural Area of Molenwaard was updated in 2013. The new plan pays particular attention to conservation areas and the World Heritage property. To face spatial challenges at the property, an aerial vision was made in 2013 as well. It forms the basis for the new Management Plan and future developments.

The Management Plan (2015) considers, among others, the pressures and advantages of tourism. Plans are being considered for a new and larger visitor centre that allows for better visitor control and guidance and will help increase public awareness of the importance of the property. The integration in the landscape gets particular attention. 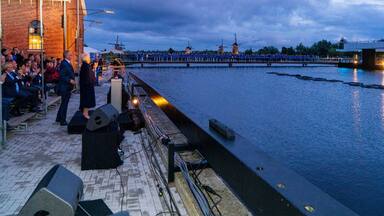