The List Mines of Rammelsberg, Historic Town of Goslar ...
Print

The Upper Harz mining water management system, which lies south of the Rammelsberg mines and the town of Goslar, has been developed over a period of some 800 years to assist in the process of extracting ore for the production of non-ferrous metals. Its construction was first undertaken in the Middle Ages by Cistercian monks, and it was then developed on a vast scale from the end of the 16th century until the 19th century. It is made up of an extremely complex but perfectly coherent system of artificial ponds, small channels, tunnels and underground drains. It enabled the development of water power for use in mining and metallurgical processes. It is a major site for mining innovation in the western world. 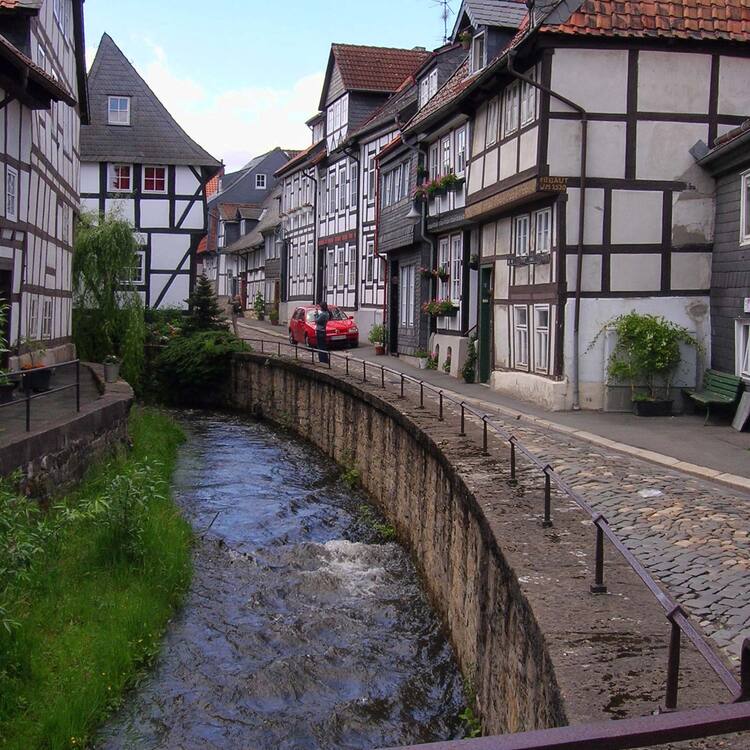 The copper, lead and tin mines of Rammelsberg mountain, in the Harz region, were worked continuously from the 11th century until the 1980s. They bear outstanding testimony to mining installations and practices in Europe, both in terms of surface and underground remains, particularly from the Middle Ages and the Renaissance period.

The remains of the Cistercian monastery of Walkenried and the mines of the Upper Harz bear testimony to the first attempts to systematically extract non-ferrous metal ores (including silver, lead, tin and copper) in Europe, and to develop water-management systems for this purpose.

Located close to the Rammelsberg mines, the town of Goslar played an important part in the Hanseatic League because of the richness of the Rammelsberg metal-ore veins. From the 10th to the 12th century it became one of the seats of the Holy Roman Empire. Its historic centre, which dates back to the Middle Ages, is perfectly preserved, and includes some 1,500 timber-framed houses from the 15th to 19th centuries. The Upper Harz water-management system, through its extensive surface area, including a large number of artificial ponds and ditches, together with drains and underground shafts, bears testimony to the importance of the management and use of water for mining purposes, from the Middle Ages until the end of the 20th century.

Criterion (i): The historic mining network of the Mines of Rammelsberg, the Historic Town of Goslar and the Upper Harz Water-Management System constitutes one of the largest mining and metallurgical complexes for non-ferrous metals in Europe. Known to have existed since ancient times, it has been in continuous use since the Middle Ages, initially under the impetus of Cistercian monks, and in later periods under the control of regional princes and of the Holy Roman Empire, of which Goslar was one of the capitals. The ensemble is an outstanding example of human creative genius in the fields of mining techniques and industrial water-management.

Criterion (ii): The historic mining network of the Mines Rammelsberg, the Historic Town of Goslar and the Upper Harz Water-Management System exhibits an important interchange of human values, in the field of mining and water management techniques, from the Middle Ages until the modern and contemporary periods in Europe. It was the inspiration for Agricola’s De re metallica, the authoritative work on metallurgy and mining in the Renaissance.

Criterion (iv): The historic mining network of the Mines of Rammelsberg, the Historic Town of Goslar and the Upper Harz Water-Management System constitutes an outstanding and very comprehensive technological ensemble in the fields of mining techniques, non-ferrous metallurgy and the management of water for drainage and power. Its extent and its period of continuous operation are exceptional. It also provides a characteristic example of administrative and commercial organization in the Middle Ages and the Renaissance period, through the remains of the monastery of Walkenried and the town planning of the Historic Town of Goslar.

The integrity of the water-management system is excellent in terms of its very comprehensive embodiment in the property, its functional dimension which is still in use, and the quality of the associated landscapes in the Upper Harz mountains. It bears testimony however primarily to alterations dating from the Renaissance until the contemporary era. In some specific cases, efforts to preserve ancient and traditional water-management elements are essential.

With regard to the industrial and technical elements of the Rammelsberg mine, the authenticity of the surviving elements is unquestionable. Inevitably alterations and reconstructions have taken place at Goslar over a period of almost ten centuries, but most of the current historic centre is fully authentic. The monastery of Walkenried contains both well conserved elements and ruins. Its authenticity is unquestionable.

In 1977 the Upper Harz Water Management System was classified as a technical monument by the State of Lower Saxony. The Monument Protection Act (Niedersächsischen Denkmalschutzgesetz) of 1978 protects all the architectural elements and industrial structures of the property proposed for the extension.

Individually, each of the constituent parts of the property is satisfactorily managed, and is provided with adequate structures and competent staff. An architectural restoration and conservation programme has thus been carried out in the historic town of Goslar, and the development of an interpretation centre has been undertaken at Rammelsberg. The same applies to the extension of the property to include the Upper Harz, where each part of the property has individual management structures which are generally effective: the water-management system by the technical company Harzwasserwerke, the monastery by a foundation, and the various mining, museum and tourism sites by foundations, associations or bodies linked to the municipal authorities. There is however no overall management system for the serial property, no common scientific committee for the serial property, and no overarching authority bringing together all the stakeholders involved in the conservation and management of the serial property. These shortcomings must be rapidly corrected, and a general management plan must be drawn up, with an overall vision of the conservation of the property’s OUV and its future prospects, particularly in terms of the development of tourism.