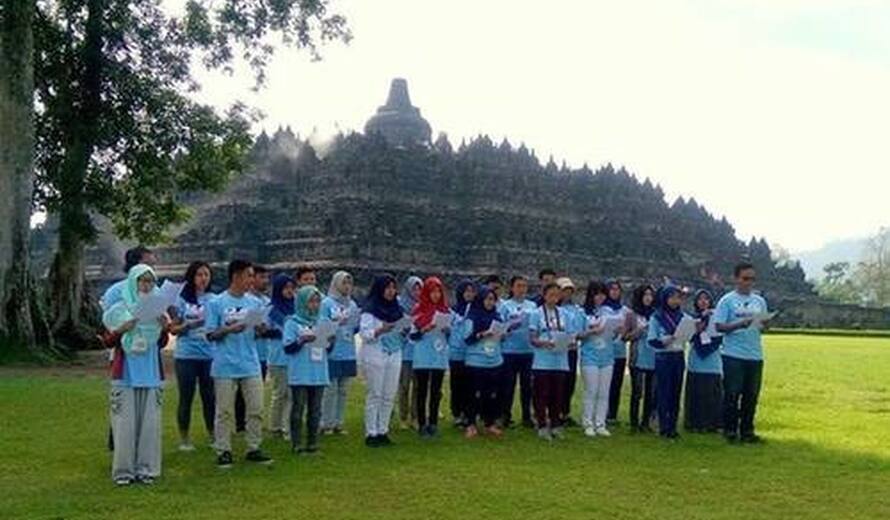 Within the framework of the Heritage Education Program, the Directorate of Heritage and Cultural Diplomacy (Ministry of Education and Culture, Directorate General of Culture) conducted the World Heritage Camp Indonesia (WHCI) 2016 from 8 to 14 November.

During this camp, participants conducted classroom activities, visited the three World Heritage sites along with the site managers, and engaged in group discussions and hands-on work that focused on designing programs within the community empowerment/heritage preservation campaign.

In addition to these activities, the WHCI participants were also provided with the opportunity to learn about intangible heritage by way of a traditional dance called Kipas Asri, which was performed during a Ramayana Ballet performance held on Saturday, 12 November at the Ramayana Theatre, Prambanan Temple.

Forty-four youths from across Indonesia participated in the forum, which was facilitated by Ms. Cilik Tripamungkas (UNESCO Jakarta) and supported by youth representatives from Dejavato, Young Guardian Club (YGC), and Indonesia International Work Camp (IIWC) under the supervision of Mr. Yunus Arbi, the Head of the Sub-Directorate of World Tangible Heritage Affairs, Directorate of Heritage and Cultural Diplomacy (Ministry of Education and Culture, Directorate General of Culture). Mr Yunus stated that the forum is expected to foster shared responsibility among young people in protecting national heritage in a global way.

To mark the end of the youth forum, participants gathered together to read the WHCI 2016 declaration at the Borobudur Temple Compounds. Within the declaration, the youth participants stated their commitment to continue to promote cultural heritage, support the government in the World Heritage Tentative List preparation process, create a youth community focused on heritage, and encourage educators and academics to include World Heritage within their school or college lessons/educational activities.