The List Gebel Barkal and the Sites of the Napatan ...
Print

These five archaeological sites, stretching over more than 60 km in the Nile valley, are testimony to the Napatan (900 to 270 BC) and Meroitic (270 BC to 350 AD) cultures, of the second kingdom of Kush. Tombs, with and without pyramids, temples, living complexes and palaces, are to be found on the site. Since Antiquity, the hill of Gebel Barkal has been strongly associated with religious traditions and folklore. The largest temples are still considered by the local people as sacred places. 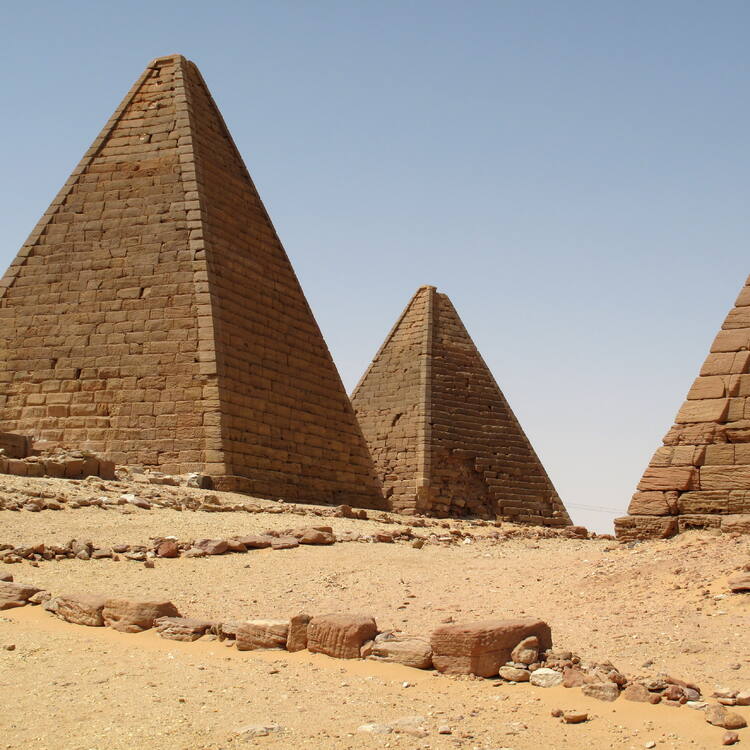 Pyramides. Gebel Barkal and the Sites of the Napatan Region (Sudan) © UNESCO

Gebel Barkal and the Sites of the Napatan Region comprise five archaeological sites on both sides of the Nile in an arid area considered part of Nubia. Together they cover an area more than 60 km long. The sites (Gebel Barkal, Kurru, Nuri, Sanam and Zuma) represent the Napatan (900 - 270 BC) and Meroitic (270 BC - 350 AD) cultures of the second kingdom of Kush. They include tombs, with and without pyramids, temples, burial mounds and chambers, living complexes and palaces. They exhibit an architectural tradition that shaped the political, religious, social and artistic scene of the Middle and Northern Nile Valley for more than 2000 years (1500 BC- 6th Century AD).

The pyramids, tombs, temples, palaces, burial mounds and funerary chambers set in the desert border landscape on the banks of the Nile, are unique in their typology and technique. The remains, with their art and inscriptions, are testimony to a great ancient culture that existed and flourished only in this region.

Gebel Barkal has been a sacred mountain since New Kingdom times (ca. 1500 BC). The Egyptians believed that their State God Amon resided in this "Holy Mountain". Today, the mountain is locally named (Gebel Wad el-Karsani) after a Muslim sheikh (saint) buried near the 100m high, flat-topped sandstone rock. The mountain is closely associated with religious traditions, since the tomb of this sheikh is still being visited by the local people for blessings.

Criterion (i): The pyramids, palaces, temples, burial chambers and funerary chapels of Gebel Barkal and the Sites of the Napatan Region and their related relief, writings and painted scenes on walls represent a masterpiece of creative genius demonstrating the artistic, social, political and religious values of a human group for more than 2000 years.

The corbel vaults of the tombs of Kurru constitute a new building technique which influenced Mediterranean architecture from the 7th Century BC onwards.

Criterion (ii): In terms of their architecture the sites of the Napatan Region testify to the revival of a once almost universal religion and related language: the Egyptian old script and the worship of the State God Amon.

Criterion (iii): Gebel Barkal and the other sites of the property bear an exceptional witness of the Napato-Meroitic (Kushite) civilization that prevailed in the Nile Valley from the 9th Century BC to the Christianization of the country in the 6th Century. This civilization had strong links to the northern Pharaonic and other African cultures.

Criterion (iv): The typology of the buildings, their details and the layout of the ensemble of the pyramids of Gebel Barkal, Nuri and Kurru with their steep angles and decorated sides, together with the painted rock-cut burial chambers, represent an outstanding example of funerary architecture and distinctive art that prevailed over a long period of time (9th Century BC- 4th Century AD). The mounds of Zuma represent a continuation of some aspects of this burial tradition up to the 6th Century AD.

Criterion (vi): Since antiquity the hill of Gebel Barkal has been strongly associated with religious traditions and local folklore. For this reason, the largest temples (Amon Temple for example) were built at the foot of the hill and are still considered by the local people as sacred places.

The building materials and shapes of the pyramids, palaces, temples, burial chambers and funerary chapels have not been altered or modified. The relief, writings and painted scenes have equally preserved their original design, texture and color.

The high degree of intactness of the attributes expressing Outstanding Universal Value gives the serial site's great integrity. The archaeological buildings are only very slightly affected by modern urban extensions. However, careful monitoring of the developments around the property needs to be carried out, especially urban extension on the Desert side.

The five sites are located in an exceptional river and semi-desert landscape almost untouched by modern development.

Most of the pyramids of Gebel Barkal are still preserved in their original shape and height. The relief and paintings on the walls of temples and burial chambers are equally well preserved. Even the monuments affected by the action of nature and man still demonstrate the original pattern of human occupation of the territory.

The limited inadequate restoration interventions of the last century are easy to remove and replace by others according to modern scientific standards.

The material remains, such as the inscriptions (Mut Temple) and the paintings (Kurru), express the revival of a once almost universal religion and related language: the Egyptian old script and the worship of the State God Amon.

The scene preserved inside the rock-cut temple dedicated to the Goddess Mut and representing King Taharqa worshiping God Amon seated inside the flat topped mountain testifies to the sacred nature of this mountain.

The site is connected with the greatest Kings of the Middle Nile Region, whose political power extended up to the Egyptian Delta and Palestine. One of their famous rulers, Taharqa, is the only Sudanese sovereign mentioned by name in the Old Testament.

All these attributes in terms of design, materials, art, inscriptions, location and setting express the Outstanding Universal Value of the property.

The property is protected by the Antiquities Protection Ordinance of 1905, amended in 1952 and recently in 1999. A Management Council has been established and a resident site manager has been appointed. He is assisted by a group of technicians.

A management plan was prepared in 2007 and approved in 2009. This plan still needs to be fully implemented.

The sites are guarded by a military force from the Police of Tourism and Antiquities. Detailed topographic maps have been prepared showing clearly the boundaries of the property. A buffer zone which would provide a better protection to the property is still to be established on the five components of the property. This buffer zone is only partially established. A consultant company is preparing the design and cost for the fencing and basic infrastructure on the sites. A museum for the history of the region has been established within the compound of a tourist village at Sanam in cooperation with a local investor.

The Management Council will attract foreign partners to contribute to the ongoing efforts for the preservation of the archaeological heritage of the sites. There is still a considerable potential for research on the five components of the property. 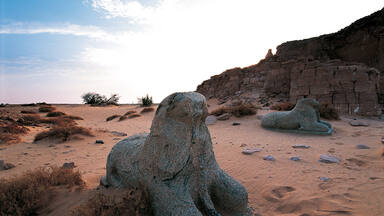 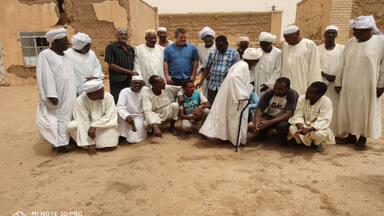