State of Conservation Gebel Barkal and the ... 2019
Print

On 25 January 2019, the State Party submitted a state of conservation report, which is available at http://whc.unesco.org/en/list/1073/documents/, and addresses the concerns of the Committee, by providing:

The State Party recognises that more effective coordination of the archaeological missions is necessary within the framework of a comprehensive Management Plan. The state of conservation report by the State Party is intended as the first step in remedying past deficiencies.

The State Party invited a joint World Heritage Centre/ICOMOS Reactive Monitoring mission (17-25 February 2019), which was requested by the Committee to determine whether the state of conservation of the attributes that sustain the Outstanding Universal Value (OUV) of the property are subject to ascertained or potential danger. Its report shall be available at http://whc.unesco.org/en/list/1073/documents.

The 2019 mission provided preliminary results and acknowledged the efforts being made by the State Party to protect the property, including upgrading the administrative structure of the National Corporation for Antiquities and Museums (NCAM), and the consideration given to strengthen the 1999 Antiquities Protection Ordinance.

With regard to the property boundaries and buffer zones, the mission found these were not properly defined or managed, leading to confusion at institutional levels. Consequently, an area in front of the Gebel Barkal site has been sold for development despite the intention for it to be part of the buffer zone. Urban development and construction are also encroaching on the property (Nuri village, Zuma), leading to high adverse impacts. The need to control urban development particularly on the Western side was highlighted at the time of inscription. Moreover, the ‘exceptional river and semi-desert landscape almost untouched by modern development’ that formed the setting at that time is now seen by the mission to be degraded.

In addition, poor tourism management and enforcement has led to uncontrolled vehicles entering the property. This partly reflects the lack of capacity of the tourism police to provide basic site protection. It is more than urgent that the State Party submit to the World Heritage Centre a Minor Boundary Modification with clarification on the buffer zones at the property.

The museum and storage facilities at the different components are in a very poor condition. The facilities currently lack the basic requirements for safety and security as well as an adequate conservation environment, but there are proposals to enlarge the space and enhance conditions.

A Management Plan was adopted in 2007 but has not been implemented due to lack of personnel. While some management planning is available, it does not exist for all components, and where it does it is not implemented. There is no overall strategy for managing different foreign teams undertaking excavation and restoration projects or for coordinating approaches: each team applies its own methodology. It is highly recommended to set urgently a management mechanism and harmonize the work of archaeological missions at the property

The mission noted that many important projects have been undertaken without proper regard for the requirements under Paragraph 172 of the Operational Guidelines. For example, the hasty implementation of the shelter over the funerary structure at El-Kurru was undertaken prior to the advice of the Advisory Bodies being considered. There is a similar concern regarding several planned or under-construction visitor centres within the property, which need re-locating. Although good work is being done on a small part of the property this is just not enough at the moment to reverse the downward trends.

The mission found that urgent measures need to be implemented at the property to reverse the alarming level of deterioration at most sites that is impacting highly adversely on the authenticity and integrity of the property, and to halt development on the western side of Gebel Barkal that would irretrievably compromised its setting. Together these threats, combined with the negative impact of uncontrolled tourism and lack of adequate protection and management are impacting adversely, and in places irreversibly, on the OUV of the property. It is recommended that the Committee expresses its dismay at the current situation and urges the State Party to take urgent actions to control the situation and implement in full the recommendations provided by the 2019 mission.

In response to the request of the Committee to consider whether inscription of the property on the List of World Heritage in Danger was justified, in line with Paragraph 179 of the Operational Guidelines, it is recommended that the Committee support the mission’s proposal to give the State Party one more year to implement its recommendations and then to review progress made with controlling the current degradation in 2020. 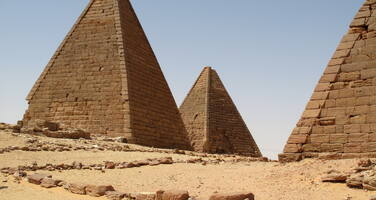