The 65km-stretch of the Middle Rhine Valley, with its castles, historic towns and vineyards, graphically illustrates the long history of human involvement with a dramatic and varied natural landscape. It is intimately associated with history and legend and for centuries has exercised a powerful influence on writers, artists and composers. 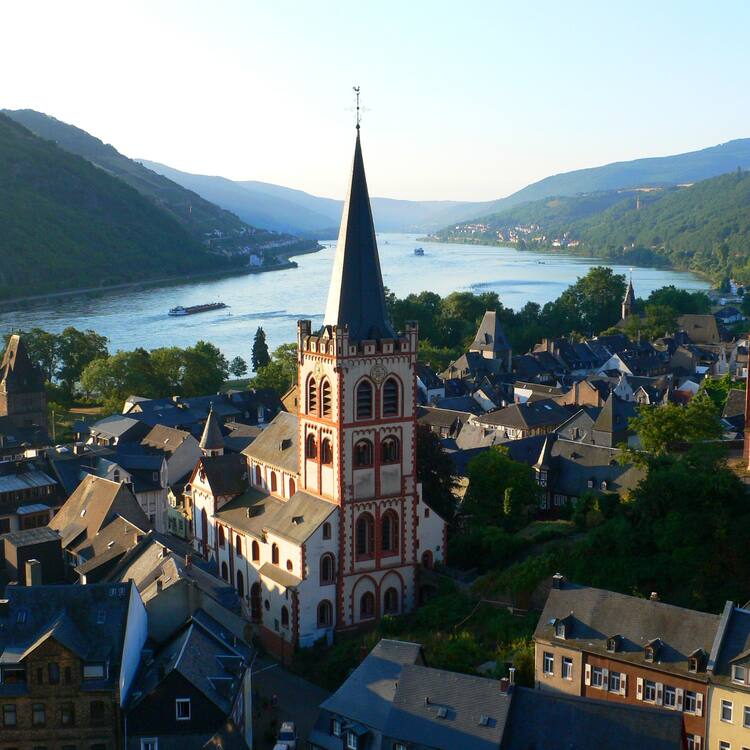 The strategic location of the dramatic 65km stretch of the Middle Rhine Valley between Bingen, Rüdesheim und Koblenz as a transport artery and the prosperity that this engendered is reflected in its sixty small towns, the extensive terraced vineyards and the ruins of castles that once defended its trade.

The river breaks through the Rhenish Slate Mountains, connecting the broad floodplain of the Oberrheingraben with the lowland basin of the Lower Rhine. The property extends from the Bingen Gate (Binger Pforte), where the River Rhine flows into the deeply gorged, canyon section of the Rhine Valley, through the 15km long Bacharach valley, with smaller V-shaped side valleys, to Oberwesel where the transition from soft clay-slates to hard sandstone, results. In a series of narrows, the most famous of which is the Loreley, no more than 130m wide (and at 20m the deepest section of the Middle Rhine), and then up to the Lahnstein Gate (Lahnsteiner Pforte), where the river widens again into the Neuwied Valley. The property also includes the adjoining middle and upper Rhine terraces (Upper Valley) which bear witness to the course taken by the river in ancient times.

As a transport route, the Rhine has served as a link between the southern and northern halves of the continent since prehistoric times, enabling trade and cultural exchange, which in turn led to the establishment of settlements. Condensed into a very small area, these subsequently joined up to form chains of villages and small towns. For over a 1,000 years the steep valley sides have been terraced for vineyards.

The landscape is punctuated by some 40 hill top castles and fortresses erected over a period of around 1,000 years. Abandonment and later the wars of the 17th century left most as picturesque ruins. The later 18th century saw the growth of sensibility towards the beauties of nature, and the often dramatic physical scenery of the Middle Rhine Valley, coupled with the many ruined castles on prominent hilltops, made it appeal strongly to the Romantic movement, which in turn influenced the form of much 19th century restoration and reconstruction.

The Rhine is one of the world's great rivers and has witnessed many crucial events in human history. The stretch of the Middle Rhine Valley between Bingen and Koblenz is in many ways an exceptional expression of this long history. It is a cultural landscape that has been fashioned by humankind over many centuries and its present form and structure derive from human interventions conditioned by the cultural and political evolution of Western Europe. The geomorphology of the Middle Rhine Valley, moreover, is such that the river has over the centuries fostered a cultural landscape of great beauty which has strongly influenced artists of all kinds - poets, painters, and composers - over the past two centuries.

Criterion (ii): As one of the most important transport routes in Europe, the Middle Rhine Valley has for two millennia facilitated the exchange of culture between the Mediterranean region and the north.

Criterion (iv): The Middle Rhine Valley is an outstanding organic cultural landscape, the present-day character of which is determined both by its geomorphological and geological setting and by the human interventions, such as settlements, transport infrastructure, and land use, that it has undergone over two thousand years.

Criterion (v): The Middle Rhine Valley is an outstanding example of an evolving traditional way of life and means of communication in a narrow river valley. The terracing of its steep slopes in particular has shaped the landscape in many ways for more than two millennia. However, this form of land use is under threat from the socio-economic pressures of the present day.

The extensive property contains within its boundaries all the key attributes - the geological landscape, the sixty towns and settlements, the forty castles and forts, the vineyard terraces that define this prosperous and picturesque stretch of the Rhine valley and encompass all the key views that influenced writers and artists.

Thanks to the relatively modest leeway given by the natural landscape of the Middle Rhine Valley to the people inhabiting it, this section of the river has undergone fewer changes than others. As a result, but also thanks to various early attempts to protect the landscape and its historical monuments, the landscape has remained largely untouched. As a result, many of the features and elements that lend the area its authenticity have been preserved.

However the railways that run along the valley contribute to the noise pollution in the Valley which is a problem that needs to be mitigated.

Signatories of the Rhine Valley Charter (Die Rheintal Charta) of November 1997, which include the great majority of communities in the Middle Rhine Valley, undertake to conserve, manage, and exercise care in developing the natural and cultural heritage and the unique cultural landscape of the Rhine Valley.

Since 2005, the property has been run by the Upper Middle Rhine Valley World Heritage Association, which comprises representatives from all the local and 'county' authorities falling within the region, as well as including officials from the federal states of Hesse and Rhineland-Palatinate. The association also provides the property's World Heritage manager.

In 2004, the job of monitoring the implementation of the management plan in Rhineland-Palatinate was transferred to the state's Structural and Approval Directorate in Koblenz. The measures taken in the property serve primarily to preserve historical castles and towns, uphold the tradition of winegrowing on the steep slopes of the valley, secure habitats for rare animal and plant species, and generally ensure that the state of the environment remains unaltered. These measures are also designed to underpin the region's economic viability in a bid to dissuade people from moving away and prevent the average age of the region's inhabitants from rising.

To conciliate economic development to benefit local communities and the safeguarding of the Outstanding Universal Value of the property a Master Plan for the further sustainable development of the Upper Middle Rhine Valley World Heritage Site is about to be compiled. 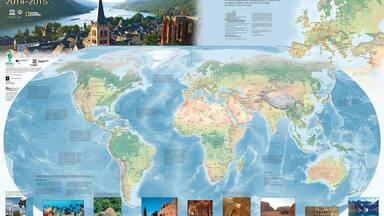