In August 2007, the State Party provided an impact study on a project for the crossing of the Upper Middle Rhine Valley taking into account the economic, cultural and landscape aspects and the outstanding universal value of the property. Initially, five possibilities were considered by the State Party: two low bridges across the river, one high bridge, a tunnel and an increase in the number of existing ferry crossings. Of the five initial possibilities considered by the impact study for the Rhine crossing, only two projects remain today under consideration: a bridge construction, the“Wellmich-Fellen low bridge”, judged to be the least disruptive to the integrity of the property, and a tunnel that links the B274 road to the east with the L208 road to the west, between the localities of St Goar and St Goarshausen.

At the invitation of the German authorities, a World Heritage Centre and ICOMOS advisory mission took place on 10 February 2008 to examine the different proposals for the location of the Rhine crossing, whilst respecting the outstanding universal value of the property.

The construction of a bridge at this location was considered by the responsible authorities as the best alternative as connection to the existing road networks was feasible. The dimensions of the bridge would in particular, need to take into account a number of constraints linked to river traffic and the treatment of access routes. The following points concerning the potential construction of a bridge in the World Heritage property should be considered:

a) The visual integrity of the cultural landscape of the inscribed property needs to be considered from two viewpoints: firstly, in the context of the conservation of clearly identified historical and cultural significance over a long period of time, within a cultural landscape, and secondly in the framework of a European transport axis of outstanding universal value.

b) Due to the existing morphology of the Rhine Valley, the perception of the landscape is formed in successive landscape sequences. Therefore, particular attention should be paid to the risk of disrupting the scale and harmony of the landscape through the construction of a bridge of sufficient scale as to allow the passage of large tourism vessels.

In ICOMOS’ opinion, the wide visual integrity of the cultural landscape of the inscribed property as well as its clearly identified historical and cultural significance would be affected by the bridge construction, which would be difficult to reverse. In this case, the outstanding universal value of the property would be diminished by a disruption in the scale of the landscape, breaking the relationship of harmony between the historic buildings themselves and their environment.

The ICOMOS evaluation emphasizes the way in which the Rhine, over the centuries, created a natural landscape of great beauty that has strongly influenced artists of all kinds – poets, painters and composers. There are rich cultural associations, both historic and artistic, embedded in the present landscape. In ICOMOS’ opinion, the size of the bridge would have a serious negative impact on this valley that has inspired romantic perceptions of the landscape and has become a model demonstrating the way in which human settlements, buildings and landscape can merge to produce a setting of great aesthetic value.

The tunnel between St. Goar and St. Goarshausen

The World Heritage Centre and ICOMOS consider that the existing infrastructures would permit the connection of the tunnel entrances to the road network, and these connections are envisaged at a certain distance from the banks of the Rhine. However, due to the configuration of this area, the linking up of the tunnel to the A61 road (right side of the Rhine) appears to be problematic. The solution of a tunnel, although much more costly, would maintain the visual integrity of the property. Additional technical studies are, nevertheless, required to confirm this project and demonstrate its compatibility with the outstanding universal value of the property and its integrity.

The mission also noted that the noise pollution linked to the railway lines along the Rhine Valley has increased in recent years, particularly with regard to commercial goods traffic. Peaks in sound levels above 100 decibels have been recorded. Only a rethinking of railway policy within the property would reduce the noise pollution. Discussions with the competent Federal authorities are ongoing to develop technical solutions to reduce the sound pollution, as well as a modification and redistribution of the flow of commercial goods traffic using alternative transport routes.

2. Notes with satisfaction the State Party's action in involving the World Heritage Centre and ICOMOS in their reflection with regard to the Rhine crossing project and in the preservation of the Outstanding Universal Value of the property;

3. Requests the State Party to carry out an Environmental Impact Assessment of the Rhine crossing options, as well as to prepare an additional transport plan to evaluate in a more detailed manner the feasibility of possible construction and traffic management, whilst respecting the Outstanding Universal Value of the property;

4. Requests moreover the State Party to submit to the World Heritage Centre, by 1 February 2009, an updated report on progress in its reflections concerning the Rhine crossing for examination by the World Heritage Committee at its 33rd session in 2009.

2. Notes with satisfaction the State Party’s action in involving the World Heritage Centre and ICOMOS in their reflection with regard to the Rhine crossing project and in the preservation of the outstanding universal value of the property;

3. Requests the State Party to give priority to the solution of a tunnel and carry out an environmental impact study, as well as to prepare an additional transport plan to evaluate in a more detailed manner the feasibility of this construction and traffic management whilst respecting the outstanding universal value of the property;

4. Also requests the State Party to consider the necessary exceptional financial requirements involved in the implementation of the tunnel construction, under acceptable conditions for the inhabitants and their local communities, should the environmental impact study confirm the feasibility of the tunnel;

5. Expresses its concern at the very high level of noise pollution linked to the increasingly heavy railway traffic in the Upper Middle Rhine Valley and further requests the State Party to examine without delay a reduction in the railway traffic of commercial goods as well as a mid-term regional railway plan together with a chart showing the overall sound levels within the inscribed property;

6. Requests moreover the State Party to submit to the World Heritage Centre, by 1 February 2009, an updated report on progress in its reflections concerning the Rhine crossing and on the reduction of sound levels, for examination by the World Heritage Committee at its 33rd session in 2009. 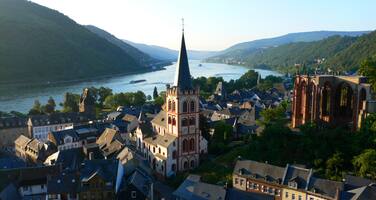