Península Valdés in Patagonia is a site of global significance for the conservation of marine mammals. It is home to an important breeding population of the endangered southern right whale as well as important breeding populations of southern elephant seals and southern sea lions. The orcas in this area have developed a unique hunting strategy to adapt to local coastal conditions. 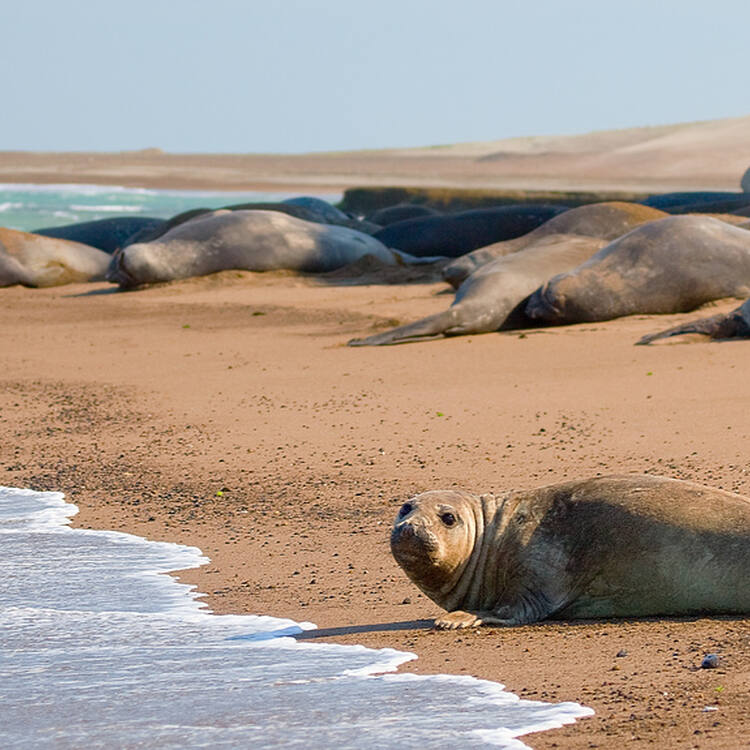 Brief Synthesis
Peninsula Valdes is located in the Argentinean Province of Chubut. The peninsula of approximately 360,000 hectares reaches more than 100 kilometres eastwards into the South Atlantic Ocean. Its roughly 400 kilometres of shoreline include a series of gulfs, including the extensive Golfo San Matias to the North and Golfo Nuevo to the South, both covering several thousand square kilometres. The dynamic coastal zone features rocky cliffs of up to 100 metres in height, shallow bays and shifting coastal lagoons with extensive mudflats, sandy and pebble beaches, active sand dunes, and small islands. The wetlands, some of them today also recognized as a Wetland of International Importance under the Ramsar Convention, are associated with the tidal areas of the Peninsula and provide significant nesting and resting sites for numerous migratory shorebirds. The diverse terrestrial, coastal and marine ecosystems of Peninsula Valdes contain natural habitats of extraordinary value from both a scientific and a conservation perspective.

Connected to the mainland only through a narrow strip of land, the mushroom-shaped peninsula and its shore are almost insular in nature. Its calm gulfs, sheltered from the rough South Atlantic, are key breeding, calving and nursing areas of the Southern Right Whale and many other marine mammals, such as Southern Elephant Seal, Southern Sea Lion and Orca. There are important breeding colonies of shorebirds and tens of thousands of nesting Magellanic Penguin. The land ecosystem is dominated by Patagonian Desert Steppe, representing more than half of the plant communities distinguished in Argentinean Patagonia despite its relatively modest size. Terrestrial wildlife includes Guanacos, one of South America's native camelid species, and the Patagonian Mara, a rodent endemic to Argentina. There are 181 recorded bird species, including the Lesser Rhea, the White-headed Steamer Duck, endemic to Argentina, and the migratory Snowy Sheathbill.

Criterion (x): With more than 1,500 specimens visiting the area annually Peninsula Valdes contains the globally most important breeding grounds of the Southern Right Whale, a species that had severely suffered from commercial whaling. The conservation efforts in Peninsula Valdes have been playing and continue to play an important role in the ongoing recovery of this whale species, an encouraging success story in global conservation. The property is also noteworthy for several other marine mammals, in particular major breeding populations of Southern Sea Lion and Southern Elephant Seal. As for the latter species, Peninsula Valdes harbors the northernmost colonies, and the only breeding population of this species in continental Argentina. The small local population of Orca has developed a spectacular hunting method by intentionally stranding on the shores to catch offspring of Southern Sea Lion and Southern Elephant Seals. Both the coastal areas, a diverse mosaic of wetlands, mudflats, dunes and cliffs, and the land area, a distinct and relatively intact part of the Patagonian Desert Steppe, harbour diverse flora and fauna of high conservation value.

Integrity
The peninsula is a naturally defined unit of the Patagonian landscape. It covers the terrestrial habitats with its remarkable flora and fauna in its entirety, including the particularly valuable coastal habitats. The original habitants of the area were the Tehuelche, which lived off the land and sea prior to colonization. Later on sheep farming emerged as a dominant land use to this day with heavy exploitation of marine mammals as an additional source of employment and income. Despite ongoing sheep grazing and related competition between livestock and native herbivores, as well as persecution of native predators, the property continues to support diverse communities of native vegetation and wildlife. The property is sparsely populated and infrastructure is modest. No industrial development has occurred with the exception of an aluminium smelter in the town of Puerto Madryn, located on the mainland but on the shore of Golfo Nuevo.

Historically, the Southern Right Whale population had almost collapsed due to excessive whaling but eventually its global protection was achieved in 1935. Southern Sea Lion was also heavily hunted for oil and skins on the peninsula, legally until 1953 and illegally into the 1970s. The populations of both species have responded to the conservation measures with impressive recoveries.

The marine areas are similarly intact. Despite the good overall state of conservation the property illustrates some inherent limitations of protected areas. All of the charismatic species Peninsula Valdes is globally renowned for are seasonal visitors only. While the property adequately conserves critical and sensitive habitat it is clear that the future of the populations also depends on suitable and intact habitat elsewhere.

Protection and management requirements
The formal conservation history of Peninsula Valdes started in the 1960s when provincial legislation established the first Touristic Nature Reserves, Punta Norte and Isla de los Pájaros. Several other provincial protected areas have since been established in particularly valuable areas, including Golfo San Jose Provincial Marine Park in 1974. In 1983, a comprehensive Nature Reserve for Integrated Tourism Development was declared to guide responsible tourism development, integrating all previously designated protected areas. A strict marine reserve was created in Golfo Nuevo in 1995 to strengthen the protection of the Southern Right Whale, extending five nautical miles from the shore around most of the peninsula. The Chubut Provincial Tourism Organisation is in charge of the reserves. Since the 1970s, there are wildlife guards supporting local police and the National Coast Guard. Most of the land is privately owned in large "estancias". Decision-making requires a dialogue with representatives of all stakeholders, of which landowners are a major group. The management of the property encompasses a strong research component involving the National Centre for Patagonia and many national and international academic and non-governmental partners. In-situ conservation measures are complemented by national and international instruments applicable to the Southern Right Whale. The species not only received international protection from commercial whaling but was also declared a natural monument by the National Congress of Argentina in 1985.

On land adapted livestock numbers are needed to prevent further degradation and to restore habitats. Tourism, a vital sector of the local economy, is a central management issue with major potential for securing conservation finance. At the same time, tourism has complex environmental impacts in the property. Uncontrolled whale-watching and other forms of wildlife viewing can result in disturbances of sensitive breeding populations both on land and water. Careful monitoring and where required limitation is indispensable. Tourism increases the consumption of scarce freshwater in the arid environment and inevitably augments solid waste and wastewater. Pollution from sewage treatment facilities, fish processing plants, and industry around the town of Puerto Madryn needs adequate environmental management. Solid waste management is required to prevent impacts from artificial inflation of gulls and rat populations which predate key species within the property.

The Peninsula System Management Plan, with a participatory strategic planning methodology, was undertaken since 1998. Completion,  effective implementation and ongoing monitoring of management plans for the property is essential.

The leading causes of human-induced mortality of Southern Right Whales are ship strikes and entanglements in fishing gear. Consequently, increased vessel traffic through whale-watching, the aluminium smelter in Puerto Madryn and commercial fishing are concerns requiring ongoing protection and management measures. Passing marine traffic bears the additional great risk of spills that can only be mitigated by appropriate disaster preparedness.

A more complex challenge is the fact that all the marine mammals mating, calving and nursing in Peninsula Valdes are vulnerable to pollution, accidents and the direct and indirect effects of excessive fishing throughout their vast ranges – this challenge can only be addressed through international cooperation. 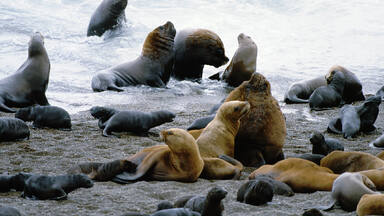