A joint UNESCO/IUCN mission took place from 31 May to 2 June 2006. The results of the mission were presented orally to the 30th session of the Committee (Vilnius, 2006). The mission reported excellent progress in improving the State of Conservation of the property and in the implementation of the corrective measures. The significant increase in the direct inflow of water into the lake ecosystem had resulted in a reduction in the level of salinity and permitted a gradual restoration of the ecosystem. Whilst the increase in water inflow so far had been mainly the result of increased rainfall over the past 4 years, the State Party had recognized the need to provide Ichkeul with fresh water, recognizing it as a net water consumer. As a result, the Committee decided to remove the property from the List of World Heritage in Danger. The mission noted however that there was still a need to develop an integrated and autonomous and adequately funded management structure, and to finalize and adopt the management plan.

As requested by the Committee, the State Party organised in January 2007 a workshop to discuss the recommendations of the 2006 mission, in which UNESCO and IUCN participated. The workshop made the following recommendations:

(i) Create a management structure with decision-making powers;

(ii) Establish a Consultative Scientific Council with the goal of guiding the discussion on the structure of management;

(iii) These two elements should form an integral part of the Management and Operations Plan;

(i) Integrate water management as a principal and fundamental element of the Management and Operations Plan (MOP);

(ii) Ensure the objectives of the MOP focus on the conservation measures by taking into account the Outstanding Universal Value of the site;

(iii) Ensure the careful use of water discharging from the Sidi Barrak Dam;

(iv) Ensure that measures are put in place to restore the ecological functioning of the Joumine Wadi inside the Park;

Collect and store scientific data and reports relating to Ichkeul in a central location to enable their analysis; in particular, for the census of winter waterfowl and for mountain birds;

Continue and complete monitoring, in particular relating to lake sedimentation;

(i) Ensure that there are public campaigns to raise awareness of the values of the Park (above all with the inhabitants of the Park and its surroundings);

(ii) Facilitate the production of both accessible and scientific documents in Arabic.

The State Party submitted on 31 January 2007 a report on the state of conservation of the property and on progress with regard to the completion of the corrective measures.

Despite having a year of below average rainfall, favourable conditions for the ecosystems were maintained, for the fourth consecutive year. This has had a positive impact on the wetland vegetation, resulting in a significant return of wintering migratory birds over 120,000. These results are presented in the Park’s 2005/2006 scientific report.

The State Party has reported the following progress in implementing the recommendations of the 2006 monitoring mission:

a) Management plan: a joint Tunisian-German research group is developing a participatory Operations and Management Plan for Ichkeul National Park. This plan was discussed during the January 2007 workshop;

b) The first results from the updated mathematical models for management and forecasting will be available in June 2007, and the models will be re-launched to be operational for the next annual hydrological cycle;

c) The population of the park has actively participated in the identification of pressures and proposed actions for the Community Development Plan;

d) Existing scientific monitoring activities continue to be carried out by the National Agency for the Protection of the Environment (ANPE);

e) Measures to strengthen institutional capacity for park managers and those involved in community development were carried out in 2005;

f) Research contracts have been signed with university departments and research institutions in order to improve the scientific and ecological knowledge of wildlife and vegetation in the park; and

g) A plan of action has been prepared to raise public awareness, which includes plans to produce educational materials, promote ecotourism, and establish five environmental clubs.

The State Party has yet to complete the establishment of the autonomous and permanent management structure, and the participatory management plan. Although the State Party reported that the wetland ecosystems were functioning and that migratory bird numbers have increased, there was no information on the volume of annual inflow achieved.

3. Notes with satisfaction that the State Party has successfully organised the workshop requested by the Committee at its 30th session (Vilnius, 2006) to discuss the recommendations of the 2006 monitoring mission, and made progress in planning for the management of resources;

4. Urges the State Party to report on the annual flow received by the property to ensure that the average annual range from the benchmarks of 80-120 cubic metres is achieved;

5. Requests the State Party to complete and submit the Management Plan of the property to the World Heritage Centre and IUCN, together with the annual report of scientific monitoring, information on the Agenda 21 Committee and the establishment of the autonomous and permanent management structure; 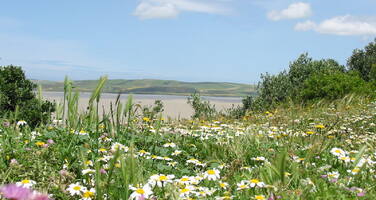