a) Extremely fragile nature of the buildings that were constructed using local materials such as timber for frames, corrugated iron sheets for roofs and some walls, and stucco and lightweight construction that functioned with regular maintenance;

b) Lack of maintenance over the past 40 years as well as vandalism at the property;

c) Metal cladding corroded and some of the structural elements dismantled. A few buildings, such as the Leaching house, are liable to structural collapse if no support is given;

e) Damage caused by the wind.

Management Plan carefully implemented by the responsible institutions through:

a) An operational management team devoted exclusively to this exercise;

b) Completed “Programme of High Priority Interventions” for structural consolidation of the urban and industrial buildings;

c) Full security for the visitors.

a) Establishment of the management team with adequate human and financial resources;

b) Structural consolidation and rehabilitation works for several emblematic buildings, such as the “public buildings”, housing sector and the industrial zone edifices, using available materials within the property;

c) Security measures for the visitors in some buildings, such as those located in the industrial zone.

a) The first phase work plan includes security measures for visitors, cleaning and selection of materials, and low cost corrective measures. The second phase foresees the urgent structural consolidation of all the identified buildings which should be done by 2008.

b) The implementation of the work plan is dependant on the availability of funds. Unfortunately at this point in time there is no clear funding source.

The report submitted by the Comisión de Monumentos Nacionales (National Monuments Commission - CNM) of Chile, the national authority responsible for the state of conservation of the property, responds to the general situation of the property, analysed by the World Heritage Committee in July 2006, and the following aspects stand out:

a) The State Party is commited to find the necessary resources to carry out the consolidation work for the 30 identified main projects in the Programme of High Priority Interventions for structural consolidation work, particularly on the industrial buildings, at an estimated overall cost of USD 700,000.  The approved 2007 budget will allow to start the work, tentatively in April 2007, with a budget of USD 93,000. It was however stated that the timescale for completion might have to be extended to  2009.

c) The struggle against the dismantling and theft of materials is continuing. People found guilty of stealing materials have been sentenced to prison terms, within the framework of a new legal system implemented throughout the country from 2005, and conforming to provisions introduced within the legislation concerning national monuments during the same year. The application of these measures has intensified and made the sanctions related to offences against cultural heritage more effective (Law N° 20.021, 14 July 2005).

d) Information was given relating to the restoration of urban buildings such as the hotel, the school and the town theatre. The formulation of restoration projects for both buildings is in an advanced phase, and both rely on funding from private sources.

e) Concerning the implementation of the Management Plan, the improvement of the legal framework, administrative procedures and the core principles of the plans have started. An architect and an industrial civil engineer were appointed. Following discussions by the stakeholders, it was decided to convene a meeting in April 2007 to revise the Management Plan, in order to incorporate, by consensus, the vision and the experience of the administrators of the site during their term of office, from 2004 to the present day.

f) The State Party stated that the celebration of “Saltpeter Week” in November every year brings together numerous ‘pampinos’ – inhabitants of the zone with a distinct bond with the property. It has great significance and strengthens the understanding of the property as a living heritage. However, this major gathering exerts a great pressure on the site. In this regard, the experience of the Saltpeter Week 2006 has progressively improved, and it is an essential issue to be addressed during the April 2007 meeting.

g) Cleaning of the site has continued, as has research and the study of the industrial material stocked away as waste, which has been carried out with great care. This has allowed a better understanding of the industrial process of the extraction of saltpeter providing information that will benefit the museum of the property. A positive and enriching intervention was the installation of original rolling stock on the railways that used to transport nitrate.

h) Concerning urban regulations, the Regulatory Plan of the town of Pozo Almonte, where the Humberstone and Santa Laura saltpeter offices are located, has recently been modified and the amendment has officially stipulated the obligation to come up with a specific regulation instrument for the buffer zone.

The report did not contain official information concerning finding an alternate route for the proposed road A-16 that goes trough the protected area.The World Heritage Centre has not received either detailed information concerning restoration works carried out during 2006 with the collaboration of private donors.

Members of the World Heritage Centre visited the site with the representatives of the Saltpeter Museum Corporation, representatives of the National Monuments Council and of the Public Work Ministry on 19 and 20 March 2007. As a result of the visit and in collaboration with the national experts, the following recommendations were formulated:

a) The staff responsible for the site is not multidisciplinary enough in their approach to be able to implement the next stages of the Management Plan until 2009;

b) No significant progress has been made in the prioritised intervention plan for the urgent consolidation of the industrial buildings;

c) Regarding the industrial buildings, a more comprehensive study of potential structural risks is highly recommended. This should be accompanied with a study on the typology of structures and the use of local construction materials such as stucco pampino and the development of some applied research on the deterioration of materials such as wood, stucco, metal cladding and timber. The results of these studies should serve as a baseline to complete the conservation plan for the industrial and urban buildings.

d) According to Paragraph 172 of the Operational Guidelines and because of the extremely fragile nature of the buildings and their singularity, the foreseen interventions within the High Priority Structural Consolidation Programme should be examined by ICOMOS.

e) A mechanism for improving co-operation through the exchange of information between local/regional and national authorities and technical decision making processes for the implementation of the Management Plan is urgently needed.

g) On the occasion of the meeting that will take place in April 2007, it is highly recommended that a wider group of partners should be involved in the implementation of the Management Plan to discuss more proactive social participation by the local and regional population and to take advantage of this workshop to plan any future transversal local alliances and to contribute to the protection of the property.

h) Archaeological survey and, where necessary, scientific excavation should be undertaken in some areas when the process of ordering and cleaning deposits of industrial materials is not superficial.

3. Takes note of the efforts made by the State Party in the implementation of the Management Plan;

4. Invites the State Party to provide by 30 November 2007 details of a project for structural consolidation of the 30 main projects identified in the Programme of High Priority Interventions for industrial and urban buildings, and the timeframe envisaged for its implementation and the establishment of technical teams, according to Paragraph 172 of the OperationalGuidelines to be examined by ICOMOS;

5. Requests the State Party to provide the World Heritage Committee with the information concerning the specific regulations of the buffer zone;

6. Also requests information on the identification of an alternate route for the road A-16 and the achievements concerning the measures taken to control access of vehicles to the Humberston Office;

7. Encourages the State Party to take advantage of the Workshop to improve the participatory process for the implementation of the Management Plan and to include a public use plan to be developed on the basis of the experience of the Saltpeter Week;

8. Urges the State Party to carry out a more comprehensive study of potential structural risks and to submit it to the World Heritage Centre and ICOMOS as soon as possible;

9. Further requests the State Party to provide the World Heritage Centre, by 1 February 2008, a progress report on the implementation of the Management Plan, to be examined by the Committee at its 32nd session in 2008;

10. Decides to retain the Humberstone and Santa Laura Saltpeter Works (Chile) on the List of World Heritage in Danger. 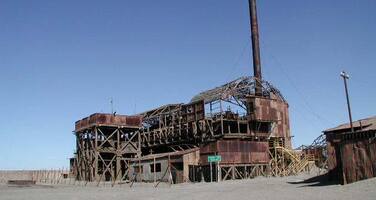