On 26 November 2020, the State Party submitted a state of conservation report, an executive summary of which is available at https://whc.unesco.org/en/list/1446/documents/, and presents progress in a number of conservation issues addressed by the Committee at its previous sessions, as follows:

On 18 December 2020, the State Party submitted plans for two proposed churches - the Ethiopian Orthodox Tewahido Church and the Saint Maroun Maronite Church - to the World Heritage Centre for review.

The submission of an Earthquake Response Preparation Plan is noted. While this generally appears to be adequate, its scope is not very clear. The title and action program refer to earthquakes but other parts of the plan refer to all disasters including floods and earthquakes. The action program contains timeframes for a number of training actions, although the State Party reports that several of these could not be undertaken as scheduled because of the COVID-19 pandemic and that the training programme would be resumed at an appropriate time.

No information is provided as to how this plan is integrated within the property’s Management Plan, as requested by the Committee.

The World Heritage Committee previously requested the State Party to revise the Heritage Impact Assessment (HIA) for completed and new buildings in the buffer zone (Decision 43 COM 7B.46). The State Party has provided re-assurances about the protection of OUV through a range of measures such as the updated Procedures of the Design and Construction Guidelines for New Churches and Existing Churches to address both proposed and existing churches, where the latter are subject to alterations or extensions, and which were submitted for approval by the World Heritage Committee. The signed commitments from the Christian denominations at the property should ensure compliance with the guidelines, including regarding the construction of boundary walls. The guidelines appear satisfactory and their implementation and effectiveness should be monitored. The ICOMOS technical review (March 2021), however, expressed concern that the success of the guidelines might be compromised as they do not consistently offer measurable advice. It is also noted that no revised HIA has yet been provided.

The updated guidelines reduce the maximum building height from 35 to 20 metres. While this is a very substantial change, it would be helpful to understand the basis for this reduction (e.g. through a Visual Impact Assessment). The extent to which the tree plantings around the new churches will visually replicate the landscape values of the Jordan River landscape and hide the mass and height of the churches is not tested, and some visual analysis is called for. The question of cumulative impacts of the new church developments should also be a matter for HIA.

It is noted that the revision of the Master Plan for the buffer zone is still to be completed. The information provided regarding enhancement of protection for the property through expanding landscape protection within and beyond the buffer zone is also noted. However, the accompanying map suggests that areas previously designated for hotel/touristic activities, and the area of the new churches have been re-labelled ‘nature reserve’ with no indication of any proposed changed land uses in these areas. The assumption might be that new plantings around buildings will be sufficient to provide the ‘wilderness’ landscape aesthetic, but this has not been tested. The revision of the location of the proposed convention centre, raised by the Committee, has not been addressed. It is expected that these issues will be clarified in the buffer zone land use plan under preparation.

The comments of the State Party regarding the continuing need to ensure preservation of important vistas and sightlines related to the western banks of the Jordan River and its efforts to report on issues relating to protection of the OUV of the property are noted.

The report provides an overview of conservation and other works undertaken at the property, such as maintenance and cleaning of mosaic floors and other attributes, and consolidation of walls. These works appear satisfactory. 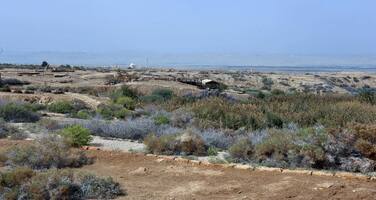