On 30 November 2018, the State Party submitted a report responding to Decision 42 COM 7B.37 for which a Technical Review was issued in September 2019.

On 2 December 2019, a complementary state of conservation report was submitted in response to the previous Committee Decision regarding programmes with the Inter-American Development Bank (IDB) and the strategic plan to address the recommendations of the 2014 ICOMOS Advisory mission. This report is available at http://whc.unesco.org/en/list/526/documents/, providing information on the following:

ICOMOS undertook a Technical Review of the State Party’s November 2018 progress report, which recalled the urgency of implementing actions with regard to institutional and legal frameworks, the approval and implementation of the Master Plan for the Integral Revitalization of the Colonial City of Santo Domingo, and particularly the definition and formal submission of the buffer zone.

A number of initiatives have been undertaken by the State Party, including the development of stronger frameworks for the conservation and management of the property, and the proposal for a loan from the IDB to implement the second phase of the Integral Programme for Tourism and Urban Development of the Colonial City of Santo Domingo.

Regarding the legal framework and the management system, specific legislation has been adopted, as well as the definition of roles for the various government agencies involved in the city’s management. A management structure has been defined, with the creation of a Strategic Committee and a Consultative Committee. These bodies are a good start, although there is still need for a clear operational protocol related to decision-making. The effectiveness of these measures will need to be assessed particularly in the framework of the second IDB-funded project.

The impact of tourism on the Outstanding Universal Value (OUV) of the property is still unclear, and remains a source of concern. The State Party reports an increase in visitor numbers, but there is also mention that the thresholds determined for the property are far from being exceeded. It is unclear how these numbers have been calculated, or what the impact of increasing visitation will have on the property’s protection. A positive initiative related to tourism is the ongoing development of a plan to adopt a certification process to turn Santo Domingo into a sustainable destination; however, more information would be required to understand the implications of this initiative. It is important to bear in mind that the Covid-19 pandemic may change the approach to tourism at the site.

The vulnerability of the property to earthquakes and hurricanes is not addressed by the State Party in its report. Due to the increasing threat of these natural phenomena to the OUV of the property, the development of a Disaster Risk Management Plan will be pertinent.

There was only a structural analysis done of the Hotel Francés that partially collapsed in 2015. Studies were undertaken to document the state of the building, and to assess the requirements for new foundations. The conclusions are, however, not clear for understanding whether the results are based on calculations for modern construction, or for traditional masonry. There is also no description of how the reconstruction is planned.

The State Party mentions that important rehabilitation and maintenance actions have been carried out in 2018-2019, but there are no indications of what these actions were, how they were undertaken, nor were they previously submitted to the World Heritage Centre and the Advisory Bodies for review in conformity with Paragraph 172 of the Operational Guidelines. Two specific diagnoses are presented for the ruins of San Francisco and for the Santa Bárbara Church. In the first case, although the state of conservation is documented, some of the recommendations made by a foreign consulting firm are worrying, particularly with the proposal to either demolish a damaged wall, or to reinforce it. In the case of Santa Bárbara Church, there is also insufficient information to evaluate the proposed conservation and restoration treatments. Regarding urban development and underground infrastructure projects, it should be acknowledged that the State Party notifies that the Subway Line 6 project is not foreseen in the next 10 years.

It remains of outmost concern that there is no significant progress in the definition of the buffer zone and the formal submission of a Minor Boundary Modification request to the World Heritage Centre, although it is noted that the State Party reports that no further projects have been developed in the Sansouci project in the eastern part of the proposed buffer zone. 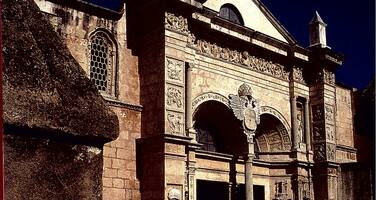