On 30 November 2018, the State Party submitted a report on the state of conservation, with annexes, which is accessible at http://whc.unesco.org/en/list/217/documents/   and reports on the implementation of Decision 41 COM 7B.43 and other activities over the period February 2017 – November 2018, as follows:

The State Party does not envisage any transfer of port infrastructure from the Nessebar Port Terminal outside the peninsula away from the visual catchment of the property. The State Party has also advised of the approval of a project for a school and sport facility, including an underground parking within the buffer zone, in the area of the Messambria Ancient Necropolis.

Some progress has occurred with the implementation of the Committee’s Decisions, however, key steps are yet to be addressed, particularly the approval of the updated Conservation Management Plan, the elaboration of the Detailed Development Plan for the property and its buffer zone, the revision of the General Development Master Plan, and the constitution of an inter-ministerial working group to ensure clear governance and management of the property based on its Outstanding Universal Value (OUV).

The size of ships allowed to moor at the Nessebar Port Terminal is now 160m, which still impacts negatively on the visual character of the property, and is not consistent with the capacity of the property to sustain pressures from several hundred cruisers at the same time. It is of great concern that the State Party does not recognize the need to relocate these ships and associated infrastructure elsewhere considering the ascertained negative impacts that large cruise ships have proved to cause to similar properties. The rehabilitation project of the Nessebar – Buna Fishing Port does not adequately address required improvements for the target area. The approved school and sport facility, with underground parking, in the area of the Messambria Ancient Necropolis, requiring removal of all archaeological vestiges up to the sterile layer, is indicative of a management approach that is not focused on cultural heritage. There is no shared, clear vision for the future of Nessebar, centred on the preservation and promotion of its OUV. Uneven involvement and commitment from all relevant national and local administrations and stakeholders prevent a coherent, effective, inter-sectorial response to the negative factors affecting the property.

The October 2018 joint World Heritage Centre/ICOMOS Reactive Monitoring mission, which followed previous missions, including the 2015 ICOMOS Advisory mission and the 2017 joint Advisory mission of the World Heritage Centre/ICOMOS/Scientific and Technical Advisory Body (STAB) to the 2001 Convention on the Protection of the Underwater Cultural Heritage, found that the state of conservation of the property is impacted by negative factors which represent both ascertained and potential threats to the OUV of the property. The mission reports are accessible at http://whc.unesco.org/en/list/217/documents/.  The 2018 mission found that the attributes of OUV of the property are deteriorated and, in some instances, irredeemably spoiled.  In particular, it found that the “tangible traces” of “numerous civilizations” are hardly detectable in the context of an urban environment and a costal landscape that has undergone drastic changes; most of the typical townhouses that illustrated “the different stages of development of the characteristic wooden houses, which testify to the supreme mastery of the architecture of the Balkans as well as the East Mediterranean region” have been altered or transformed irretrievably; the “medieval churches” that are the most valuable and tangible portion of Nessebar’s heritage, whilst preserved and restored, no longer dominate the urban ensemble, the spirituality of the town that was “a remarkable spiritual hearth of Christian culture” is lost; the “urban fabric of high quality” has lost its coherence and its historic appeal owing to the great number of minor alterations combined with the major transformation  of the coast; the “vibrant urban organism” has been transformed for commercial purposes to service the beach resorts nearby: in the summer, it is suffocated by mass tourism interested in its restaurants and commercial facilities; for the rest of the year, it is almost abandoned.

The 2018 mission recommendations incorporate those from earlier missions and include immediate and longer-term actions required. A number of the threats have been identified and reported to the Committee previously, leading to Decision 41 COM 7B.43, which foreshadowed that the Committee would examine the state of conservation of the property, with a view to considering, in the absence of substantial progress, its possible inscription on the List of World Heritage in Danger.

The progress made by the State Party is acknowledged but is not sufficient to address the ongoing threats to the integrity, authenticity and OUV of the property, as confirmed by the findings of the 2018 mission, and therefore, in accordance with Paragraph 179 of the Operational Guidelines, the property warrants inscription on the List of World Heritage in Danger. 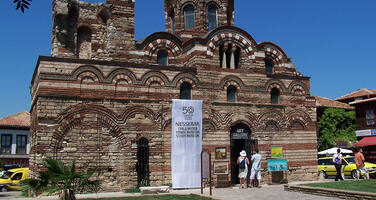