On 27 December 2018, the State Party submitted a report on the state of conservation of the property, which is available at https://whc.unesco.org/en/list/1406/documents, and reports progress in addressing Decision 40 COM 7B.88 as follows:

The intended extension of the property is in line with the Committee’s decisions and would constitute a positive step towards reducing the property’s vulnerability to various threats, including climate change, and extend the representativeness of ecosystem diversity within the property. It is recommended that the Committee commend the State Party for taking further steps towards a ‘landscape approach’ under the Convention, while noting the need for coherent management, adequate governance, funding and staffing in both the envisaged expanded property and its buffer zone. It is recommended the Committee recall that the proposed extension would require a Significant Boundary Modification, as foreseen in Paragraph 165 of the Operational Guidelines and follow the procedures similar to a new nomination, including the requirement for the area to be previously included in the Tentative List. It is recommended the State Party seeks guidance from IUCN and the World Heritage Centre on the nomination process, as required.

Local natural resource use is a critical governance and management issue. There is no alternative to meaningful involvement of local resource users to address corresponding conflicts. The ongoing efforts in this regard are therefore most welcome, and especially efforts to strengthen the involvement of local communities and indigenous peoples, and the Committee may request that the State Party ensure meaningful involvement of local stakeholders and rights holders in governance and management, including in the process of enlarging the property. The reportedly 15,000 residents of the relatively small buffer zone (Ecozone) need sustainable livelihood options to reduce pressure on both the buffer zone and the property. According to Paragraph 119 of the Operational Guidelines, sustainable use is possible as long as it is “ecologically and culturally sustainable” and does not “impact adversely on the Outstanding Universal Value (OUV) of the property”. Grazing and other resource use have been an integral part of the mountain ecosystem for long periods of time and are thus not per se incompatible with World Heritage status. It is recommended that the Committee reiterate its request to the State Party to assess the impacts of grazing and other local resource use on the OUV of the property as a basis for participatory informed decision-making and management.

The State Party decision against the re-categorization of Sainj Wildlife Sanctuary as a national park on the grounds of avoiding a then applicable requirement to relocate three villages is noted. However, as already noted in the state of conservation report presented to the 40th session of the Committee (Istanbul/UNESCO, 2016), it is not entirely clear why the same rationale appears to be suggested for Tirthan Wildlife Sanctuary, which is used for traditional seasonal grazing but does not include any villages. No further explanation has been provided by the State Party on this matter.

The State Party’s reply regarding management responses to deficiencies identified in a Management Effectiveness Assessment exercise conducted by WII is noted but unfortunately does not provide the necessary information to allow for an assessment. It is recommended that the Committee request an in-depth response in subsequent state of conservation reporting.

It is also recommended that the Committee welcome the reaffirmed commitment of the State Party to undertake a regional comparative study within the Himalayas and adjacent mountain regions with a view to identifying potential World Heritage candidate areas and boundary configurations in this region, reiterate its recommendation to consult with other States Parties in the region, and invite the State Party to seek technical support of the World Heritage Centre and IUCN. 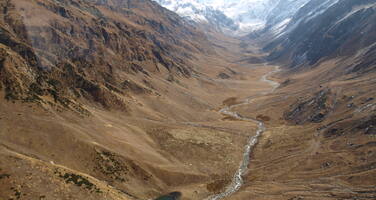