On 24 January 2018, the State Party submitted a report on the state of conservation of the property, available at http://whc.unesco.org/en/list/407/documents/, providing the following information in response to the recommendations of the 2015 mission:

In the light of the information provided, it is recommended that the Committee congratulate the State Party for its efforts to strengthen surveillance and ecological monitoring, as well as the anti-poaching combat with financial support from the European Union – ECOFAC 6 Programme (Conservation of Biodiversity and Fragile Ecosystems Support Programme) and the Central Africa World Heritage Forest Initiative (CAWHFI), with technical support from the Zoological Society of London (ZSL) and the African Wildlife Foundation (AWF). Whilst acknowledging that the number of guards remains insufficient, the seizure of 216 ivory tusks in December 2017 is one of the most important in the last few years in Central Africa and is to be commended. It is recommended that the Committee strongly encourage the State Party to continue these efforts and requests strict enforcement of the law in the domain of wildlife crime.

Despite incessant poaching, confirmation of the presence of large wildlife is encouraging. An inventory, foreseen for May/June 2018, will be fundamental for the wildlife assessment, and it is recommended that the Committee request the State Party to transmit this data to the World Heritage Centre to enable an evaluation of the state of the Outstanding Universal Value (OUV) of the property.

With regard to the extension by 13,000 hectares of the concession, granted to the Sud Cam Hévéa Company and the envisaged installation of a latex treatment facility, the World Heritage Centre wrote to the State Party on 14 February 2017, requesting Environmental and Social Impact Assessments (ESIA) of these projects. In the framework of a mission for the CAWHFI project in March 2018, the World Heritage Centre met with the Cameroon authorities to discuss these new developments that remain worrying and continue to threaten the OUV of the property. The mission also visited the DFR where it met with technical staff of the rubber plantation. It noted that the ESIAs had been carried out and had not been submitted to the World Heritage Centre and made no reference to the OUV of the property. the mission also proposed that the national authorities receive an advisory mission in the framework of the project to conduct an independent evaluation of the impact of the agro-industrial project on the property. Representatives of the Company indicated their willingness to cooperate with the World Heritage Centre and indicated that they would take into consideration the recommendations proposed by this advisory mission to limit damage caused by their activities to the DFR.

Concerning the Mékin dam, the mission for the CAWHFI project recalled that the current ESIA is not in conformity with the standards for a World Heritage property, and it is expected that the Company submit, as soon as it is available, the ongoing studies: socio-economic to measure the impact of the impoundment of the dam on the local populations, and environmental to evaluate its impact on the state of conservation of the DFR. The Company has undertaken some measures, but they remain insufficient to curb the degradation of the habitat in the western part of the property.

During the CAWHFI mission, the team was informed of other projects under study located in the periphery of the property that could have an impact on its OUV (e.g. roads, mines and dam). It is recommended that the Committee express its concern as to the new developments and recalls the importance of avoiding acceptance of any new project that could aggravate the existing threats because, despite the progress accomplished in the management of the property, the inscription on the List of World Heritage in Danger still remains an eventuality should further infrastructures be added. It is recommended that the Committee grant an additional year to the State Party before considering this option, in order to obtain the results of the Advisory mission and the inventories. 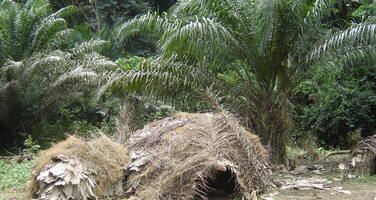